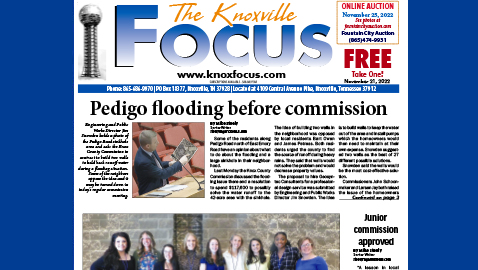 Some of the residents along Pedigo Road north of East Emory Road have an opinion about what to do about the flooding and a large sinkhole in their neighborhood.

Last Monday the Knox County Commission discussed the flooding issue there and a resolution to spend $117,600 to possibly solve the water runoff to the 42-acre area with the sinkhole. The idea of building two walls in the neighborhood was opposed by local residents Bart Owen and James Petress. Both residents urged the county to find the source of runoff during heavy rains. They said that walls would not solve the problem and would decrease property values.

The proposal to hire Geosyntec Consultants for a professional design service was submitted by Engineering and Public Works Director Jim Snowden. The idea is to build walls to keep the water out of the area and install pumps which the homeowners would then need to maintain at their own expense. Snowden suggested two walls as the best of 27 different possible solutions.

Snowden said the walls would be the most cost-effective solution.

Commissioners John Schoonmaker and Larsen Jay both raised the issue of the homeowners maintaining the pumps. Snowden said the largest property owner there would not agree to build a retaining basin for runoff on the property.

At first Commissioners Kyle Ward and Richie Beeler moved to deny the agreement. Snowden said that if the agreement fails the county doesn’t have a budget for any other solution and might move the funds to other projects. Commissioner Terry Hill asked that, if denied, the flooding would no longer be a county problem to solve. Snowden said, “That’s right, we don’t have the budget for another solution.”

Owen said the residents don’t want the wall and will continue to use small home pumps. Petress agreed saying, “We can handle it.”

Commissioner Kim Frazier asked about the source of the runoff and local housing developments. Snowden said the current updated floodwater ordinances have improved standards and added, “We’re going to be very cautious in that area.” He said that there is a 42-acre drainage area in the Pedigo Road area including pasture land and no significant construction there to affect flooding.

The motion to deny raised a legal question as to whether or not the issue would appear on today’s regular commission agenda. Knox County Law Director David Buuck said denying the item is not recommended. Ward then changed his motion to pass it along to today’s meeting with no recommendation when the council could vote the agreement down.

State Street purchase may not be extended

In other business, the years-long sale of several parcels of Knox County land along State Street met some commission opposition. The resolution calls for extending the sale of the remaining five of 13 pieces of property to Marble Alley Development six months from its December deadline to June 30, 2023.

Commissioner Schoonmaker questioned the extension, one of several since Knox County first gave “Marble Alleys, AKA Mr. Goss, the opportunity to purchase these five parcels” in 2009.

Knox County Purchasing Director Matt Myers said the agreement has been extended twice but Schoonmaker countered by counting at least five extensions given to the company for the opportunity to purchase the property. Eight parcels of the property have been purchased by the applicant.

“Knox County set the current purchase price in 2009, thirteen years ago, with the caveat that the price would increase two percent per year,” Schoonmaker said. The commissioner noted that after 2015, downtown property value has seen a “pretty amazing” increase.

Schoonmaker produced the 2019 agreement documenting the fourth extension which included up to three 12-month extensions. He pointed out that the developer agreed with Commissioner Carson Dailey’s recommendation that there should be no additional extensions beyond the expiration of December 31, 2022.

“We still have a piece of property that Knox County owns – with no revenue being generated on it – and we’ve now been holding that for this one developer for thirteen years.”

Commissioner Ward said extending the agreement “is not responsible” and the property would sell for a lot more than the original appraisal.

“I would love to get 13-year options on properties (with no money down),” Ward said, joking, “That’d be great. I’d be a billionaire in a decade.”

Buzz Goss, president of Marble Alley Development, said because of the market and the pandemic “it made sense to wait. We’ve hired architects and they have been working it.”

“We’re tweaking it,” he said, adding “It’s hard to get things financed because of the interest rate environment.”

“Is it the purchase price set in 2009 that is the issue or is it the agreement itself?” asked Commissioner Larsen Jay. He wondered if there is a compromise to bring up the price to the current market value.

Commissioner Dailey said 2020 was “a lost year” and said he remembered being the one to hold Goss’ feet to the fire. Dailey said that Goss lost his opportunity in 2021. “You said this was the last one – ‘Now we want six more months.’”

“Either you do it by December 31st, get you a partner. I’m willing to take that gamble we’re going to get more,” Dailey said. “If it takes two years to put it on the market and sell, what have we lost?”

“You really lost the opportunity in 2021 and early 2022 before interest rates started – interest rates were at zero point something. You’ve probably figured out how I’m going to vote,” Dailey said. “The taxpayers need to move on.”

Schoonmaker moved to move it to today’s meeting with no recommendation with a second from Commissioner Dasha Lundy.