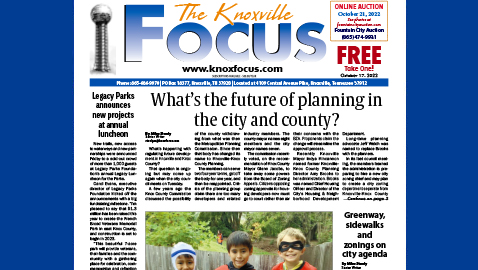 What’s the future of planning in the city and county?

That question is ongoing but may come up again when the city council meets on Tuesday.

A few years ago the Knox County Commission discussed the possibility of the county withdrawing from what was then the Metropolitan Planning Commission. Since then that body has changed its name to Knoxville-Knox County Planning.

The members can serve two four-year terms, get off the body for one year, and then be reappointed. Critics of the planning group claim there are too many developers and related industry members. The county mayor names eight members and the city mayor names seven.

The commission recently voted, on the recommendation of Knox County Mayor Glenn Jacobs, to take away some powers from the Board of Zoning Appeals. Citizens opposing zoning approvals for housing developers now must go to court rather than air their concerns with the BZA. Proponents claim the change will streamline the approval process.

Long-time planning advocate Jeff Welch was named to replace Brooks with the planners.

In its last council meeting, the members learned the administration is preparing to hire a new city zoning chief and may plan to create a city zoning department separate from Knoxville-Knox County Planning. The city has limited space for future single-family housing and seems to be promoting multi-family apartments.

Several council members had questions on learning of the possible pull-out from the city-county organization. Deputy Mayor David Brace told the meeting the planning question has been a topic of discussion within the administration for about two years and, if so, might offer “one-stop shopping” for developments inside the city. The council is asking for a work session and an explanation of plans being considered by the mayor’s office.

Meanwhile, Knox County is working on “Advance Knox” which does not include Knoxville or Farragut. That plan will apparently be announced next spring or summer. With lots of room for housing developments on former rural agricultural zoned properties, the county seems to favor single-family subdivision developments and making it easier to get approval.

Several Knoxville City Council members had questions during their recent meeting and some responded to a Focus inquiry after that session.

Vice Mayor Andrew Roberto responded, “Knoxville benefits from having a professional and independent planning department. I have been a longtime advocate and supporter of efforts to improve efficiency and customer service in both the planning and permitting process. Creating redundancy and duplicative services would appear to be contrary to these longtime goals. More detail is needed before considering any changes to the overall administration of our zoning ordinance.”

“The Planning staff clearly explained big changes are underway. I’m really surprised Council didn’t get as clear of an explanation. As pointed out in the PC Agenda review meeting, PC staff operate and make recommendations independent of the administration. I have a lot of questions about how this is supposed to work,” Councilwoman Lauren Rider told The Focus.

“I will be speaking with Erin Gill next week for more information on this. I have concerns and need clarity,” Councilwoman Seema Singh replied.

Councilwoman Janet Testerman sent the following: “There certainly needs to be a great deal more information brought to members of council before any potential next steps are taken. As it stands now, however, I feel the city and county need to work in tandem toward a cohesive and collaborative vision as we plan for responsible and sustainable growth.”

”Given the sharp increase in new development, the need for additional planning resources makes sense. City plans and permitting staff do a great job with existing resources. With that said, adding a new department or significantly overhauling the City’s approach to planning and development will require significant public input,” Councilman Tommy Smith said.

“I do not have any firm opinion about this yet since I just learned about it at our Council Meeting. I want to hear from the administration what their actual plan is before I can begin to form an informed opinion,” Councilwoman Lynne Fugate told The Focus.