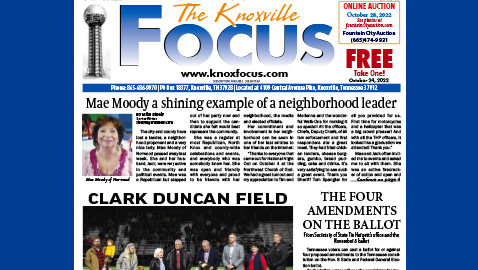 Mae Moody a shining example of a neighborhood leader

The city and county have lost a leader, a neighborhood proponent and a very nice lady. Mae Moody of Norwood passed away last week. She and her husband, Jack, were very active in the community and political events. Mae was a Republican but stepped out of her party now and then to support the candidate she felt would best represent the community.

She was a regular at most Republican, North Knox and county-wide celebrations and events, and everybody who was somebody knew her. She was open and friendly with everyone and proud to be friends with her neighborhood, the media and elected officials.

Her commitment and involvement in her neighborhood can be seen in one of her last entries to her friends on the internet:

“Thanks to everyone that came out for National Night Out on October 4 at the Northwest Church of God. We had a great turnout and my appreciation to Tim and Marlenna and the wonderful Walk-Ons for making it so special! All the officers, Chiefs, Deputy Chiefs, of àll law enforcement and first responders ate a great meal. They had fried chicken tenders, cheese burgers, gumbo, bread pudding, cake and drinks. It’s very satisfying to see such a great event. Thank you Sheriff Tom Spangler for all you provided for us. First time for motorcycles and a helicopter that was a big crowd pleaser! And with all the THP officers, it looked like a graduation we attended! Thank you.”

Mae and Jack often invited me to events and asked me to sit with them. She was an active firecracker of action and open and approachable and she proudly displayed photos of her and Jack with lots of elected officials and candidates.

As a testament to her legacy, many public officials wanted to comment on Mae’s life and passing:

“Mae was the epitome of a community volunteer and neighborhood leader. She took an active role in making her neighborhood and our City a better place to live, along with her wonderful husband Jack. Political candidates wanted a picture with Mae and Jack, and I always appreciated their support for my mayoral campaign and administration. Mae had a life well-lived and leaves an inspirational legacy of service. I will miss her.”

“I was fortunate to have met Mae through work with her community and National Night Out. She was the absolute sweetest lady and had a heart of gold. She was a huge support to me, even if it wasn’t popular. She will be terribly missed.”

“Ms. Moody, along with her husband Jack, has been a lifelong supporter Knox 911 and all of public safety. Over the years Mae has helped teach thousands of children how to properly use 911 to call for emergency assistance. She made a positive difference in the community, and she will be missed by everyone involved in public safety.”

“This was just announced at women’s Republican club today and the first I had heard of it. I loved Mae and what she represented for the Republican Party. She was always faithful in her works and deeds and often the first to invite me to an event. She treated everyone kindly and will be greatly missed.”

“Thinking of Mae’s family, especially Jack. Mae was a great advocate for her neighborhood and community. She and Jack were always there to learn and be a voice in our city. She will be missed. “

“What I will miss most about Miss Mae is the sweet smile and hug every time I seen her.”

“Mae Moody set the standard for community involvement. She cannot be replaced but I hope her example can be copied. She believed in our police.”

“Mae Moody was an exceptionally kind person and a great example of a passionate community leader. Mae’s unwavering support for our law enforcement professionals coupled with her keen eye on neighborhood issues were two areas she never let you forget about. While her smile will be missed by all, her example of service to others will be long lasting in Knox County.”

“Although I didn’t know Mae Moody personally, I do know she was engaged in our community and will surely be missed. She made a positive difference throughout Knox County both as a community champion and longtime supporter of public safety, teaching children the importance of 911 and how to use it.”

“I was saddened to learn of Mae’s untimely passing. She was a good friend and an amazing advocate for our community. She recently helped coordinate National Night Out and made sure everyone was invited. My condolences and prayers go out to her family.”

“I was deeply saddened to learn of the passing of Mrs. Mae Moody, or “young lady” as I often called her. Mae was a supporter of myself and our area law enforcement officers. Mae would light up a room with her smile, always offering a word of encouragement to those around her. She was an active member of her party and, more importantly, her community. I consider myself a better person for having the privilege of calling Mae a friend. On behalf of our blue family, we extend our deepest condolences to Jack and will pray for their family as they move forward without her. We will miss you, Mae!”

“I first met Mae Moody, when she and I were charter members of Knoxville Police Dept. Citizen’s Police Academy in 1993. She became a member of every citizen’s academy in Knox County. She personified being a community activist in the most admirable way. She and her husband Jack were inseparable. They were fixtures at Motley Crew Community Luncheon. We became and remained personal friends until her death. I extend my condolences to her family.”

“Mae Moody was a wonderful neighborhood advocate who cared deeply about our community. I always enjoyed seeing her at community gatherings. She will be greatly missed.”

“Mrs. Mae Moody embodied the very essence of a virtuous leader – compassion, integrity, honesty, and character. Her love of community will continue to be felt by her good works and lifelong commitment to serving others.”

“Mae and I became good friends, and I will miss her deeply. “

“Mae Moody was a dedicated community advocate. My last conversation with Ms. Moody was just a few months ago when she inquired about a new development on Clinton Highway. She will be sorely missed by many in our city, especially in the Norwood community where she served as a neighborhood leader for many years.”

“Mae Moody was a gift to so many in our community for years. She will be missed.”

“Mae loved her city and proved it. She and Jack were so involved with their neighborhood and the city as a whole. It wasn’t any event until they walked in the room full of life and dedication.”

“I was saddened to hear of the passing of my friend Mae. She has been a valuable contributor to making our city, county and the individual communities and neighborhoods within them, better places to live. Her voice and friendly presence will be greatly missed.”

In lieu of flowers, the family is setting up a memory box and asking friends to bring a photo, a note or a favorite memory and drop it in the box.