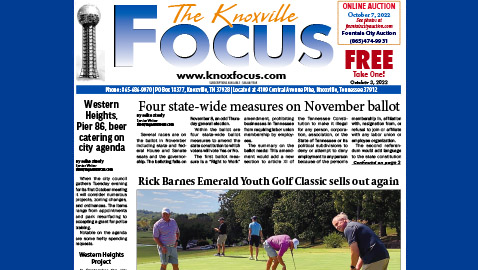 When Rick Barnes came to Knoxville nearly a decade ago as Tennessee’s men’s basketball coach, he wanted to find a way to become involved in the community.

Barnes, who is on the board of directors of Emerald Youth, pledged to match $75,000 raised by the event.

But he did more, writing a check for $100,000. The golf tournament is one of three major fundraisers held by the Emerald Youth Foundation, an inner city youth ministry that works largely through athletics and academics.

The Emerald Youth Foundation is close to Barnes’ heart because he grew up as a latch-key kid in Hickory, North Carolina.

“When I grew up in Hickory, I had a place to go hang out, to go play basketball and I had coaches who made a big impact on my life,” Barnes said. “You really may not know the impact they had on your life until later.

“I admire the work of the Emerald Youth Foundation for the work it does for the youth of Knoxville.”

The golf tournament took place one day before Barnes and the Volunteers began preseason workouts in preparation for the 2022-23 season. More than 160 golfers participated in the event, which was sold out.

The Vols will have new faces in the backcourt this season as they look to replace point guard Kennedy Chandler, who now plays for the Memphis Grizzlies.

Returning starter Santiago is back. Although he flourishes as a shooting guard, he played the point before Chandler arrived last season.

Zeigler, however, has no desire to start.

“To be quite frank, Zakai doesn’t want to start,” Barnes said. “He feels like he can impact the game coming off (the bench), which I think has been good for our team.

“Every coach should have a player like Zakai Zeigler. He would start if we asked him to. If you’re around him with what he does and how he competes, watching him and BJ, Tyreke and Santi has been a lot of fun.”

The Vols open the season on Nov. 7 when they host Tennessee Tech at Thompson-Boling Arena.