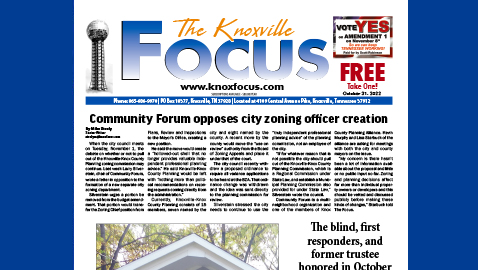 Connor Georgopoulous has realized a lifelong dream. He shared that dream with the city on Tuesday.

He now owns his own home, a 250-square-foot house on Ohio Avenue in the Lonsdale Community.

He’s always wanted to own a home. Now, thanks to some help from Home Depot and Project Foundations for Families (PF4F), he does.

He’s wanted his own home since he was a teenager, but he now has a house. The process began out of necessity. His rent skyrocketed during the height of the COVID-19 pandemic.

“In the beginning of 2021, I was on the verge of being evicted from my apartment for inability to pay the newly increased rent,” Georgopoulous said. “I started looking for a new place to move to.

“However, everywhere I looked, prices were increasing out of my pay range. Out of desperation, I started looking for land to put a tiny house on. This is a dream that I have dreamed about since I was about 15 years old.”

With the help of PF4F, Georgopoulous found a plot of land. He paid the parcel off in approximately nine months after buying it at cost and he was on his way to realizing his dream.

But there were pitfalls.

“By May of 2021, I found a plot of land through Project Foundations for Families,” Georgopoulous said. “I bought it at cost with no interest.”

“I worked with Justin, discussing the layout and the design,” Georgopoulous said. “I signed a contract with Justin and paid a sum of $66,000 with interspersed payments and a completion date of four months.”

After completing half the house, Vaughn ended the contracting side of his business, leaving Georgopoulous devastated.

“It seemed like everything that could go wrong did go wrong, but I was determined not to give up,” he said.

Rodger Easterday, a contractor from RCE Home Improvement, stepped in. Despite being overworked, Easterday agreed to look at the house.

“Rodger stated that he could not take on any more work, however, he agreed to come out and look at my half-finished house,” Georgopoulous said.

Easterday worked with Home Depot, which donated $2,000 in materials.

In September, the City of Knoxville gave Georgopoulous a Certificate of Occupancy, making him an official home owner.

“I love my new house,” Georgopoulous said. “I’ve been here for a few weeks now.

“I’m looking forward to being a good neighbor and working on projects in and outside of my house.”