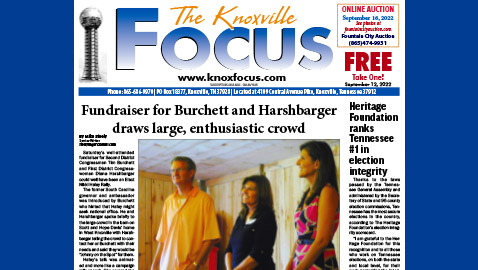 The former South Carolina governor and ambassador was introduced by Burchett who hinted that Haley might seek national office. He and Harshbarger spoke briefly to the large crowd in the barn on Scott and Hope Davis’ home in West Knoxville with Harshbarger telling the crowd to contact her or Burchett with their needs and said they would be “Johnny on the Spot” for them.

Haley’s talk was animated and more like a campaign rally speech. She covered the gamut of problems in America today from the cost of gasoline and food to school children failing to read on grade level.

She spoke of her parents, legal immigrants from India, who ask her about the illegal crossings from Mexico. She mentioned the border and the number of terrorists coming across as well as the illegal drugs coming into the nation.

Guests dined on Buddy’s BBQ but were all on their feet as the speakers talked. Before and after the speakers the representatives mingled with the crowd with Burchett introducing local citizens to both the other speakers.

Proceeds of the gathering went to the East TN Victory Fund to elect and re-elect Republican candidates.