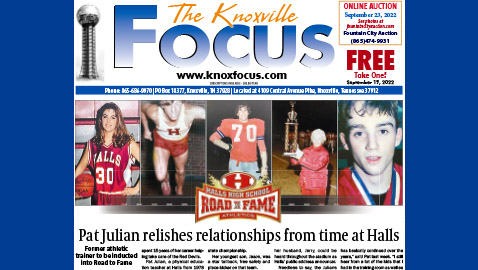 Former athletic trainer to be inducted into Road to Fame

Halls High athletics’ fourth annual Road to Fame class is a diverse group as it includes athletes, a coach and a trainer who spent 15 years of her career helping take care of the Red Devils.

Pat Julian, a physical education teacher at Halls from 1978 to 1993, has the distinction of being the first female athletic trainer in the state for a Class AAA football team, which was the TSSAA’s largest classification when Halls captured the 1986 state championship.

Her youngest son, Jason, was a star tailback, free safety and place-kicker on that team.

And while Pat was on the sideline looking out for all her boys, her husband, Jerry, could be heard throughout the stadium as Halls’ public address announcer.

Needless to say, the Julians have been a big part of the Halls community over the years.

“The most rewarding thing I had from being the trainer at Halls was the relationship I had with the players and that relationship has basically continued over the years,” said Pat last week. “I still hear from a lot of the kids that I had in the training room as well as players that never did have injuries. It was just a wonderful relationship and I am so glad that I had that position.”

Longtime youth coach and Halls supporter Ted Williams remembers Pat well. “She was highly respected by her peers and students and always confident, dedicated and compassionate and had good decision making.”

Julian, who also was Halls’ first softball head coach, still fills in as a substitute teacher at the school.

Others who will be inducted into the 2022 Road to Fame class at Halls’ game against Powell Friday night include Steve Beeler (track and football), Craig Cantrell (football) and Shannon Sayne (wrestler and wrestling coach).

Heather Abbott, a 2021 honoree in basketball, also will be recognized with this year’s group as she was unable to attend last year’s ceremony due to having Covid.

Pat Julian graduated from Carson Newman University in 1960 with a degree in Physical Education. She received her Masters Degree in PE from the University of Tennessee and also did advanced degree work at Union College.

Julian was named Halls Woman of the Year in 1986 by the Halls Business and Professional Club and was a leader in the community.

Pat received the Distinguished Service award from the Knoxville Chapter of the National Football Foundation Hall of Fame and was a co-recipient of the 2019 Halls High award for outstanding contribution to Halls football and community.

Beeler was a great athlete from 1969-72.  He was the first TSSAA state champion in any sport at Halls, winning the long jump with a leap of 21 feet, 8 inches. He also placed sixth in the State Decathlon.

In football, Steve had a kickoff return of 90 yards that held the school record for 10 years.

Cantrell (1975-1978) was an outstanding football player. He was the KIL Sophomore of the Year, a three-time All-KIL first team selection and two-time KIL Player of the Year. He also was a two-time All-State honoree.

Sayne stood out as a wrestler from 1995-1998 and was a two-time state champion. In 1998, he earned honorable mention for the Dave Schultz national award

Shannon wrestled in college at Carson-Newman and became a graduate assistant coach. He has been Halls’ head wrestling coach for 15 seasons and has produced nine regional championships. He was the 2019 Region Coach of the Year and has coached 23 state medalists at Halls, including four finalists and two champions.

Abbott (1992-1995) scored 2,080 career points in her basketball career at Halls and signed a D1 scholarship with MTSU. She transferred to ETSU and set single season record for free throw percentage, making 42 of 44 attempts.