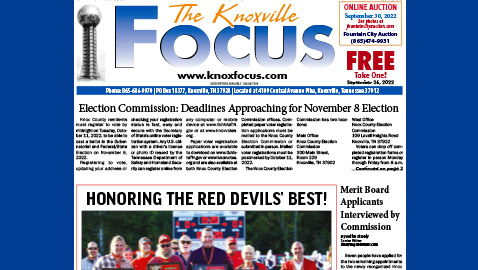 Merit Board Applicants Interviewed by Commission

Seven people have applied for the two remaining appointments to the newly reorganized Knox County Sheriff’s Office Employee Merit Board. The selections, one for a two-year seat and one for a three-year position, will apparently be made in today’s regular commission meeting.

Manning served briefly as an alternate on a previous merit council and said the board should be “a trier of facts.”

Ford said he has a degree in criminal justice and said the board should be “a place to vent” for KCSO employees.

Benedict said he has supervised 225 people and would bring “fresh blood” to the board.

Crichton said he is a former law enforcement officer and teacher and would bring “no prejudgment” to the board.

Weiner’s interview drew some attention. Commissioners Larsen Jay and Carson Dailey asked him, as they did all the applicants, if he would abide by the reforms imposed by the commission on board members including members not being involved in politics or running for public office. While the other four applicants affirmed they would, Weiner, an attorney and often a candidate for office, said he would follow the merit rules as long as they follow state and federal law. He cited his constitutional rights and said the new ordinance “has conflicts.”

“The bylaws must be followed,” Dailey replied to Weiner.

Weiner told the commission, “We have constitutional rights in this country. Those rights are given to us by God. It’s not this body’s right  to take those rights away and if that disqualifies me, so be it.”

In related business the commission accepted Gina Oster’s resignation from the merit council where she was serving as chairwoman. Oster was active in quizzing the applicants, asking if they had ever campaigned for a candidate for sheriff and stating that the merit board is “to protect the officers.”