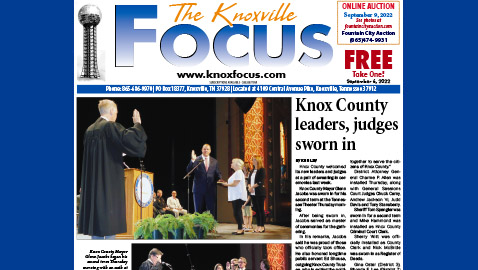 Knox County welcomed its new leaders and judges at a pair of swearing-in ceremonies last week.

Knox County Mayor Glenn Jacobs was sworn in for his second term at the Tennessee Theater Thursday morning.

After being sworn in, Jacobs served as master of ceremonies for the gathering.

In his remarks, Jacobs said he was proud of those who officially took office. He also honored longtime public servant Ed Shouse, outgoing Knox County Trustee, who is exiting the political scene after nearly four decades.

“Ed has set a high standard of public service for Knox County,” Jacobs said. “It’s been a real pleasure working with a great county commission, many of you who are leaving.

“I look forward to serving with all of these great people on this stage. Regardless of our personal differences, we will work together to serve the citizens of Knox County.”

Sheriff Tom Spangler was sworn in for a second term and Mike Hammond was installed as Knox County Criminal Court Clerk.

Sherry Witt was officially installed as County Clerk and Nick McBride was sworn in as Register of Deeds.

Steve Triplett (District 7), Rev. Doc. John A. Butler (District 1) and Katherine Bike (District 4) were sworn in as first-time members of the Knox County Board of Education while Kristi Kristy (District 9) and Betsy Henderson (District 6) were installed for second terms.

Grace Deckard, a student at Hardin Valley Academy, was installed as the board’s non-voting student representative.

On Wednesday in a ceremony at Knoxville’s Supreme Court Building, judges were sworn in.

Cerny, Davis and Patricia Hall Long were sworn in to serve as judges in Central Sessions Court. Allen was officially sworn in as District Attorney General.

Tim Irwin was sworn in for another term to the Knox County Juvenile Court.

Eric Lutton was absent but sworn in virtually as Knox County Public Defender.