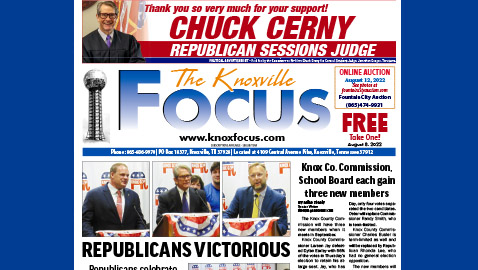 If you’re a Knox County Republican, the place to be last Thursday night was the Crowne Plaza Hotel in downtown Knoxville.

A wide range of Republican candidates and supporters were on hand to celebrate numerous Aug. 4 election victories. The atmosphere made it easy to think the party’s statewide dominance will roll on indefinitely.

“I love doing the job,” Susano said. “I’m grateful for the people I’ve met. I think we have  good officers, maybe as good as we’ve ever had in Knox. Co. I’m grateful to be able to serve you for another four years.”

Nick McBride was elected Register of Deeds. He defeated Democrat Scott Crammond. Rhonda Lee was elected to the County Commission from the 7th District. Both spoke briefly, thanking the voters and their campaign teams.

A major figure of the evening was Charme Allen, who was re-elected as District Attorney General, District 6. She defeated Democrat Jackson Fenner.

Dozens of campaign staffers took the stage with Allen as she addressed the crowd. Allen gave heartfelt thanks to her team’s dedication to her campaign.

Allen was asked what her top priorities will be for her new term.

“I would say the first objective is a mental health court,” Allen said. “We have too many people with mental health issues that we have incarcerated in our jails. We need to save those beds for the really worst-of-the-worst hardened criminals.”

Allen was optimistic progress could be made in the fight against opioids. “We’re so very fortunate in this community where everybody pulls together,” she said. “Community members in other places aren’t as collaborative as we are. Everybody works together.”

Thursday’s vote decided that Tom Spangler would again be the sheriff of Knox County. Spangler was asked about his priorities for his second four-year term.

According to Spangler, the KCSO is down at least 80 corrections officers, and 14 law enforcement officers. “We gotta do some work,” Spangler said. “I’m gonna fight for that.”

Jacobs thanked the crowd and acknowledged his opponent.

“In this day and age, as contentious as politics is, we should respect anyone who is willing to put their name on the ballot,” Jacobs said. “We need to work together when we can because that’s what’s best for our entire community.”

A priority for Jacobs in his second term is the Land Use Plan as part of the Advance Knox initiative. “That will set us up for the next couple decades,”Jacobs said.

(Advance Knox is a plan to guide, among other things, proper use of land).

“Also,” said Jacobs, “how can we be sure that we’re competitive. We need to bring more innovative-type companies to our area.”