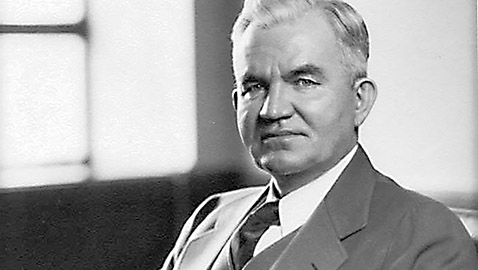 I will be quite surprised if more than a couple of my readers, save for General Slatery, perhaps, will recall Roy H. Beeler.  Roy Beeler is Tennessee’s longest serving state attorney general.  Beeler had been an assistant state attorney general before being elevated to the attorney generalship where he remained for twenty-two years.  Beeler had been named an assistant in the Attorney General’s office in 1927; Beeler became Tennessee’s Attorney General in 1932.  Quiet and self-effacing, Roy Beeler was recognized as a legal scholar and throughout much of his career was sought out as a speaker.  Beeler was also frequently consulted about constitutional questions, not only on the state level but also nationally.  Roy Hood Beeler even looked the part of an attorney; tall and angular, the General carried himself well and had a full head of gray hair.

A native of Grainger County, Roy Beeler ran for superintendent of schools in 1907.  Although a Democrat in a GOP county, Beeler lost the election by a single vote.  Roy Beeler later recalled, “That was what prompted me to go to law school and probably was the best thing that ever happened to me.”

Born in Powder Springs, less than 30 miles from Knoxville, Roy Beeler went to Carson – Newman College and was captain of the Maryville College football team, where he earned his Bachelor of Arts degree.  Beeler attended the University of Chicago where he earned his law degree.  Roy Beeler then settled in Knoxville where he practiced law from 1911 until 1927 when he was approached to serve as an assistant to then-state Attorney General L. D. Smith.  The sixty-six-year-old Smith died at his home on November 7, 1932, from a “general breakdown.”  Smith’s actual name was Leonidas d’Entrecasteaux; according to Smith’s obituaries at the time, the future attorney general’s father had been reading about a French pirate of that name and appropriated it for his son.  Friends called General Smith “Casto”, a contraction of the elaborate d’Entrecasteaux.

Leslie T. Hart was the veteran political reporter for the Nashville Banner who recalled Beeler as “a very forceful individual in a rather quiet and ever dignified manner.”  According to Hart, General Beeler was consulted by the Capitol Hill press corps almost daily.  An avid reader, General Beeler devoured newspapers and Leslie Hart asserted he “was perhaps one of the best-informed men on Capitol Hill.”  Nor did Attorney General Roy Beeler confine his reading to dusty legal briefs and documents; the General read just about everything he could get his hands on, including light fiction.  Hart noted one big reason Beeler was such an authority on Tennessee law was because the General “made” so much of it during the past thirty years.  Hundreds of members of the Tennessee General Assembly had asked Beeler to write and prepare their bills for introduction over a period of decades.  The same held true for governors of Tennessee since the late Austin Peay in 1927.  Aides to the governor would come to Beeler’s office with an outline of the chief executive’s legislative goals, all of which had to be turned into bills for consideration by the General Assembly.  General Beeler and his staff would prepare the bills and send them along to the legislature.  “He had a natural ability to understand and put into legal phraseology the thoughts and ideas of those who called upon him to write their bills,” Hart wrote.

During his time as an assistant state attorney general, Roy Beeler spent his first four years as counsel to the Railroad and Public Utilities Commission whose members were elected by the people of Tennessee.  Beeler had also been Solicitor General for the State of Tennessee until his appointment by the Supreme Court to succeed the late L. D. Smith as attorney general in November of 1932.  Beeler was elected to his first eight-year term in 1934 and was continually reelected, serving until his death while in office.

Roy Beeler’s connection to Knoxville was cemented by his marriage to the former Miss Beulah Hines, a Knoxville native.  The couple had a daughter, Mrs. Arthur B. Stephens, who lived in Nashville.  General Beeler oftentimes returned to Knoxville, usually for state business, but sometimes merely to visit with friends and relatives who lived in the area.   While practicing law in Knoxville, Roy Beeler partnered with two former schoolmates, A. E. Mitchell, who later served as a judge of the Chancery Court and Karl Steinmetz.

Nor did Roy Beeler shy away from controversy.  Beeler’s opinion about holding a limited constitution convention could not be held under the authority of Tennessee’s own Constitution was not universally popular.  Once the Tennessee General Assembly had authorized a state constitutional convention, the matter was heard by the state Supreme Court, which reversed General Beeler’s opinion.  Another opinion issued by General Beeler which was controversial at the time was his saying the State of Tennessee had no right to acquire the Memorial Apartments Hotel in Nashville over a fifteen-year period.  Beeler said in his opinion Governor Gordon Browning could not commit the State of Tennessee to any expenditure or appropriation beyond that of the biennial appropriations made by the General Assembly.  A Chancery Court upheld Beeler’s opinion shortly before the General’s death.  The Memorial Apartments Hotel deal made by Gordon Browning had become a hot issue in the 1952 Democratic primary between the governor and challenger Frank Clement.  The young Clement intimated there had been some chicanery involved in the purchase, a charge which naturally stung Governor Browning sorely.  It was one of the reasons Frank Clement upset Browning in the primary election.  Browning had run again in 1954 mainly to seek vindication from the people of Tennessee but lost badly.

“A visit with ‘The General’ in his office in the State Supreme Court Building was an experience in itself,” Les Hart remembered.  “A first visitor never forgets it.”  The General was certainly not one of those who highly prized a neat office or tidy desk.  Roy Beeler’s own desk was piled high with sundry legal papers and briefs, correspondence and evidently only the General himself could sort through the mess and produce whatever document was needed at the moment.  Even his personal secretary, Miss Mildred Rice, was awed by the formidable array of papers and books spread across the General’s desk which was oftentimes two feet high.  The General’s office also featured floor-to-ceiling bookcases, which were filled to bursting.  Admirers marveled that only General Roy Beeler understood his singular way of “filing” his papers and books.  Friends recalled that Beeler could always find any document or piece of random paper no matter how long it had remained on his desk.  Reporters referred to Beeler’s messy desk as “Beeler’s new filing system.”

Personally, Roy Beeler was prized for being able to tell great stories.  “He could entertain for hours by reminiscing of interesting and frequently humorous experiences in the courtrooms of” Tennessee.  Beeler especially liked to tell stories of his time practicing law in East Tennessee.  Having been around for so long, Roy Beeler had an extraordinarily large acquaintanceship and knew virtually every lawyer in the Volunteer State.  Aside from reading, Roy Beeler’s chief hobby was hunting and he was vigorous enough to still “cover many miles in a morning’s hunt” according to friends.  General Beeler was also “rated as a keen judge of bird dogs.”

General Roy Beeler had been feted at a banquet held at the exclusive Coleman Club in June of 1954 and was presented with a “silver testimonial tray” which had been engraved with the names of the twenty-one assistants who had served under him during his twenty-two years as Attorney General of the State of Tennessee.

On September 4, 1954, Beeler stumbled and fell while disembarking from an elevator in the State Supreme Court Building, suffering a broken hip.  Confined to Baptist Hospital in Nashville for two weeks and although he was allowed no visitors, the seventy-two-year-old attorney general was thought to be on the road to recovery when he died on September 24, 1954.  In fact, General Beeler had been up in his hospital room the day before his death.  It was after he had returned to bed when “he collapsed and died.”

According to the General’s doctor, Beeler had died of “pulmonary embolism or blood clot.”

“No person outside of his own family can possibly feel his loss any more keenly than I felt it.  He was more than an attorney general of the State to me,” Clement said.  “He was a close advisor on matters of state; his friendship was deep and abiding; his help far exceeded merely that of legal counselor.”  Governor Clement remembered General Beeler as hard-working, devoted to his office and the welfare of the people of Tennessee.  The governor said Beeler’s service “should inspire all public servants to an even higher standard of conduct.”  “In his passing the people of Tennessee have lost a wonderful man and a great public servant; I have lost a close personal friend,” Clement said sadly.

Leslie T. Hart paid his own tribute to his late friend.  “Roy Beeler gave his life to his State he loved so dearly, and in his passing you can only say, it’s a shame there aren’t more Roy Beelers in governmental affairs.”

The president of the Attorneys General Association, Eugene Cook of Georgia, interrupted a vacation in Florida to attend Roy Beeler’s funeral.  “Mr. Roy Beeler has long been considered the No. 1 attorney general in the United States,” Cook told reporters.  “His stature and standing with his associates in our group may be noted from the fact that for ten consecutive years he appeared on every panel as a speaker.  In all of those appearances, he never failed to express his love for East Tennessee.”  “I know of no lawyer who was held in higher esteem or was more highly respected than Mr. Beeler by members of the Bar,” General Cook added.  Roy Beeler had served as the president of the National Association of State Attorneys General from 1951 to 1952.

Roy Beeler had been reelected by the state Supreme Court for yet another term in 1950,  which would not expire until 1958.  Beeler clearly had the confidence of the majority of the Tennessee State Supreme Court.  Chief Justice A. B. Neil said Beeler’s passing was “sudden and shocking.”

“The State of Tennessee never had a more honorable or more useful public servant,” Chief Justice Neil said in a statement following Roy Beeler’s passing, “especially in the office of attorney general which he filled with such signal ability.  The court will be deeply distressed to learn of his sudden death.”

Edward J. Kuhn of Memphis, president of the Tennessee Bar Association, said, “General Beeler was the favorite of the lawyers of Tennessee.  He was revered as a gentleman, and highly respected for his knowledge of the law.”

No person serving the public could ask for more from friends in being remembered.  And while the skeptics amongst us may shrug off the kind words spoken by those who knew someone who has departed this life, we should all be mindful, sometimes those words are actually true.

Roy Beeler was brought back to Knoxville and sleeps in Greenwood Cemetery to this day.