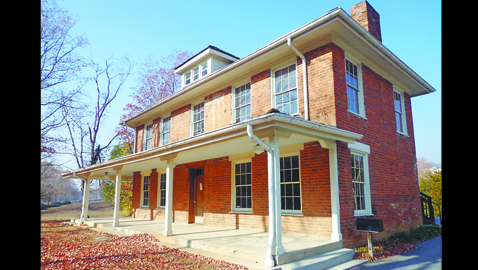 Throughout Knox County are many historic homes and structures. Many predate the Civil War and others were designed or built by iconic architects. Many of the structures have been preserved and renovated and that effort continues as local developers are working to restore various downtown buildings, schools, and homes for use.

One of the historic homes available for use as an office or company headquarters is the Lonas-Dowell House at 6432 Middlebrook Pike. The impressive two-story brick structure stands near the entrance to Dowell Springs Business Park, an attractive and active complex of medical and office buildings.

Initially the family that settled there spelled their name “Lones” but over time it became Lonas.

Originally the center of the Jacob Lones farm, the house was built by his son, Charles Lones. The farm was more than 120 acres and included a spring house and a slave cemetery.  Slaves made the bricks from local clay and helped construct the home. The walking trails through the adjoining Dowell Springs Business Park have historic markers noting those archaeological sites. A small family cemetery has the grave of Charles, noting he was born in 1812 and died in 1888, and Rebecca Johnson Lones, 1822-1863.

The home was occupied for about 130 years by the Lonas descendants and the name is a combination of the first and last families to live there. In 2000 the site was donated to Knox Heritage, who obtained a historic overlay there so no one could demolish the home. In 2005 it was sold to Tom Weiss who restored the grand old structure.

Until recently the home was occupied by Oak Springs Wealth Management and is now for sale through Wood Realty. It sits near the proposed Tennova Hospital.

The 3,000 square foot home has hardwood floors, fireplaces, six offices, two bathrooms and lots of history. Michael Wood told The Focus that the home is ideal for any business and is zoned PC with a historic overlay. He said that Weiss still owns the property and did a great job of restoring it.

“We get lots of calls about it,” he said, adding that it is not only for sale but also offered for lease.

The Dowell Springs Business Park and surrounding acreage is attractive and features a spring, creek and waterfalls.