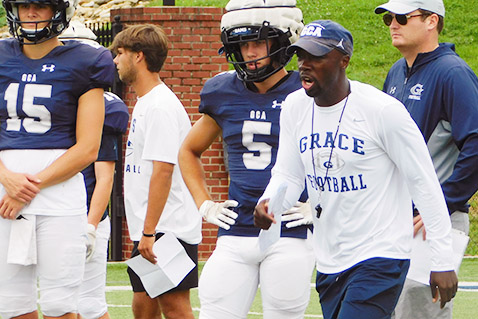 Despite Grace Christian Academy winning only one of nine games in 2021, there’s no question Justin Long was ready for his first season as a high school head coach.

His background was top-notch, having been acquired at the beginning of a highly successful era of Fulton High football as a player in 2002 and continuing as an assistant coach for the Falcons after his playing days in college.

Long’s road to GCA wasn’t an expressway; it was more like a scenic route with views of four state championships along the way.

As a player, he led Fulton to its first TSSAA state title in 2003 and ranks No. 9 on the school’s career passing list.

After graduating from high school, Long was a quarterback and wide receiver at Carson-Newman for the late Ken Sparks, one of the nation’s all-time winningest coaches.

Justin returned to Fulton in 2009 and was an assistant coach for 12 years – the first two under Buck Coatney, his high school head coach.

Long continued coaching wide receivers when Rob Black became the head coach in 2010 and had a hand in Fulton’s three-year state title run in 2012 through 2014. He later coached quarterbacks for two seasons before being elevated to offensive coordinator on Black’s staff in 2019.

“When you’re a position coach, you kind of get caught up in just your players and focusing on your guys.”

In becoming a head coach, Long found there were a lot of things to do off the field; such as emailing parents the daily schedule, staying on top of the players in regard to their grades and decision-making and ordering practice gear, jerseys and uniforms, “and just things that you never would have thought would come up.”

“There were some tough days and nights here and there, but I definitely enjoyed it,” he said. “I’m thankful for the opportunity to be a part of this great game.

“This game has been great to me in a lot of different ways. It’s taught me a lot of lessons and that’s the beauty of football. It’s very black and white. You either do or you don’t. And life is a lot like that. There aren’t any trophies they give out for almost doing anything. You either do or you don’t and I also hope that through this game we can continue to help young boys grow into being young men.”

To this day, Long still recalls seeing an example of that when he was a player at Fulton.

“On any day, the families could come and stop by practice. And even as a high school kid, I made the connection that not only are these men our coaches, but they’re also husbands and fathers. We literally got to see them at practice go and hug their wives and kids and that always made a big impression on me.

“I even tell our coaches now to bring their kids and wives to practice,” said Justin, who is married with “two little ones.” He and his wife, DeLayne, have a son, Carter, who is 2; and a daughter, Aniston, who is 9 months old.

Black said Long is impressive in many ways.

“He has always worked hard as a player and a coach and that is the reason why he has been successful in the game of football,” said Black, who stepped down from coaching after last season and has since become Assistant Athletic Director at Fulton. “What people will find when they get to know him is that he is equally as impressive as a person as he is a coach. Justin is a people person and he has a genuine care for the people and the student-athletes that he works with daily.

“It has been exciting to watch him grow in this game,” added Black. “I had the pleasure of coaching Justin, coaching with him, and then promoting him to an offensive coordinator. Justin does a great job building relationships, changing culture, and earning the trust of his players. I look forward to watching him grow his program as a head coach.”

Long and his Rams will kick off their 2022 season Friday night against Lakeway Christian Academy at White Pine. Their home opener will be Aug. 26 versus South-Doyle.