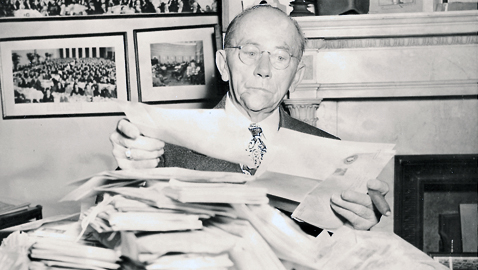 Theodore Gilmore Bilbo had twice been governor of Mississippi and was engaged in a serious controversy when he proposed to fire one hundred and seventy nine professors and faculty members from the state university system.  Bilbo’s plan to move the University of Mississippi from Oxford to Jackson had failed.  Governor Bilbo gleefully told reporters the presidents of three Mississippi universities and colleges had been replaced in little more than two hours.  The replacements for the universities and colleges were dismal, hardly being qualified to hold such positions.  The qualifications of the Dean of Mississippi’s Medical School were almost nonexistent, other than once having had a course in dentistry.

It could hardly be surprising the firings brought about serious repercussions almost immediately.  Degrees from four of Mississippi’s state universities and colleges were no longer recognized by either the Southern Association of Colleges and the American Association of Universities.  Outraged students at Ole Miss burned the governor in effigy.

Governor Bilbo was unconcerned by the reaction inside his own state.  Bilbo held a press conference while literally lolling in his bathtub.  Variously employing soap and washrag, while smoking a cigar, Bilbo made it quite clear he didn’t give a damn what anyone thought.

Bilbo’s relations with the state legislature continued to deteriorate and by the conclusion of his term of office, government was at a standstill; worse, Mississippi was completely bankrupt.

Bilbo left office and needed a job.  He implored Mississippi’s senior U. S. senator, Pat Harrison, to secure him a position.   “I will repay you a thousand times,” Bilbo promised.

Dissatisfied with the lack of progress Senator Harrison was making on his behalf, Bilbo journeyed to Washington and all but lived in Harrison’s suite inside the Senate Office Building.  Bilbo was entirely broke and Harrison was forced to give the former governor money to tide him over.  Finally, Senator Harrison went to the Department of Agriculture to find Bilbo a job.

Visiting George Peek, Director of the Agricultural Adjustment Administration, Harrison told his friend it was imperative an appropriate job be found for Bilbo.  Should Bilbo run for the United States Senate in 1934 against Hubert Stephens, it would be a “disaster.”

“The man is a vote getter,” Harrison explained to Peek.

Senator Harrison advised against putting Bilbo in a position handling money or around young women, but aside from that, the former governor was perfectly all right.

According to Harrison’s biographer, Martha Swain, Peek laughed and said to Pat Harrison, “In other words, Senator, this good Democrat Bilbo will be fine for us if we muzzle him, tie his hands, and lock up the petty cash.”

With dignity, Harrison agreed with the assessment.

Hired by the Department of Agriculture, Bilbo was kept preoccupied clipping articles, causing some to refer to him as the “Pastemaster General,” a title the former governor despised.

As the 1934 election approached, Bilbo began eyeing the Senate seat occupied by Hubert Stephens.  Senator Stephens had thought of retiring, but when it became apparent Bilbo intended to run, he decided to seek reelection.

Under financed and given little chance of winning, Theodore G. Bilbo resigned his sinecure at the Department of Agriculture and went home to Mississippi to campaign.  Shamelessly promoting himself, Bilbo waged a populist campaign, verbally demolishing the wealthy.  Bilbo, with his usual modesty, brazenly stated that he was “a wonder in sustained power of endurance, and a marvel of intellectual brilliance!”  Mississippi was acutely suffering from the ravages of the Great Depression and Bilbo’s populist message resonated with the poor, oppressed, and dirt farmers.  Few politicians of the time possessed the vocabulary of Bilbo, who could easily quote the Bible and any other number of literary works while speaking.  Even fewer still had such a thorough command of invective and ability to ridicule opponents in such amusing and easily understood language.  The Man’s friends and acquaintances in Mississippi numbered in the tens of thousands.

Senator Hubert Stephens was a dignified man, but he was not a good speaker and unlike Bilbo, he was not at all flamboyant.  Despite the best efforts of Mississippi’s political establishment, Bilbo, running on a platform of all out support for President Franklin D. Roosevelt, won.

It was not long before Mississippi’s two senators, Pat Harrison and Theodore G. Bilbo, were bickering.  Bilbo resented Harrison’s preeminence in Washington, D. C. where he was one of the more senior Democrats in the Senate.  Their political philosophies were also starkly different; Bilbo represented the lower classes while the more patrician Harrison represented business and the wealthy Delta planters who loathed the junior senator.

Harrison was up for reelection in 1936 and it soon became apparent that Governor Martin Sennett “Mike” Conner would oppose him inside the Democratic primary.  Senator Harrison had not been seriously challenged for renomination since he had defeated James K. Vardaman in 1918.  Bilbo returned to Mississippi to stump for Conner.  It was an especially bitter contest and Harrison ultimately won easily.  The hard feelings left over from the campaign did nothing to improve relations between Harrison and Bilbo.

In 1937, Senate Majority Leader Joe T. Robinson of Arkansas died in the midst of the debate over President Roosevelt’s plan to enlarge the U. S. Supreme Court.  Robinson was found dead, clad in his pajamas, beside his bed clutching a copy of the Congressional Record, by his maid.  Senator Pat Harrison was backed by the more conservative members of the Democratic caucus against Kentucky Senator Alben W. Barkley, who was believed to be Franklin Roosevelt’s choice for Majority Leader.  It was a close contest and Harrison’s supporters quickly concluded he needed the vote of his colleague, Theo Bilbo, to win.  Bilbo had indicated he would indeed vote for Harrison if his colleague were to ask him personally.

South Carolina’s James F. Byrnes told the Mississippian that Bilbo would vote for him, if he were asked personally.  Harrison listened, chomping on his cigar and thinking.

He finally replied, “You tell the son-of-a-bitch I wouldn’t speak to him if it meant the presidency of the United States”.

When the vote for Majority Leader was being tallied, the suspense was so great Barkley later admitted he bit his pipe stem in two.

Harrison lost by a single vote.

Bilbo chortled he was “the boy who killed Cock Robin.”

Senator Bilbo remained a staunch supporter of President Roosevelt and the New Deal throughout his time in the Senate.  Yet FDR had to be somewhat embarrassed by Bilbo’s support, especially considering the Mississippi senator’s virulent racism.  Bilbo attempted to amend one Roosevelt spending bill to relocate African-Americans to Liberia.

Bilbo almost casually revealed that he had been a member of the Ku Klux Klan while appearing on the radio program Meet the Press.  The Mississippi senator opined no Klan member ever truly left the organization after joining.

Senator Bilbo’s racism became ever more pronounced as he gained seniority inside the Senate.  He also remained a force to be reckoned with back home in Mississippi.  Bilbo seemed unable to tend to his own interests without interfering in local elections.  His senior colleague, Pat Harrison, died of cancer in 1941 and Bilbo had already been reelected to another six-year term in 1940.  A special election was called to fill the remaining year of Senator Harrison’s term and Bilbo was back home in Mississippi campaigning hard for Congressman Wall Doxey.

Doxey was almost the antithesis of Bilbo; tall, stately, and handsome, with a head of white hair.  Wall Doxey narrowly won the special election, but would face the voters again in 1942.

James O. Eastland, had served in the United States Senate by virtue of a gubernatorial appointment until the 1941 special election.  Eastland was not a candidate in 1941, but entered the 1942 Democratic primary against Senator Doxey.  Bilbo again campaigned for Doxey, who lost decisively to Eastland.  Senator Eastland would prove to be closer to Bilbo’s own blatant racism than the stately and genteel Doxey.

Many Mississippians recognized Bilbo’s vile racism was a detriment to their state and image.  Senator Bilbo faced three opponents inside the Democratic primary in his 1946 reelection bid.  The sixty-nine year old senator campaigned hard and won just over fifty percent of the vote to avoid a run off election.

It was Bilbo’s last victory.

The Democratic majority in Congress had been wiped out in the 1946 elections and replaced with a Republican majority.  That would become a pertinent fact when the new session of Congress began in 1946 and Bilbo was kept from taking the oath of office.  Yet it was a fellow Democrat who insisted Bilbo not take the oath of office, Glen Taylor of Idaho.

Charges were filed over comments made by Senator Bilbo during his recent reelection campaign where he incited white violence against those African-Americans who tried to vote.  More serious charges came to light when Bilbo was accused of having accepted bribes by war contractors.  Bilbo had built an impressive mansion, dubbed “Dream House” in his native Pearl River County.  Evidently the massive swimming pool at the senator’s home had been built by just such a contractor.

As the Senate began its investigation, Theodore G. Bilbo was struggling with serious health problems.  Bilbo underwent several operations for oral cancer and was often absent from the Senate.

Not surprisingly, Senator Bilbo remained defiant and was enraged when his former Chief of Staff appeared before a Senate committee, relating information detrimental to Bilbo’s cause.

Bilbo was in New Orleans as the end of his life approached, a patient at what would eventually become the Oschner Medical Center.  Standing by his bedside were his two children, whom he knew none too well.  Bilbo had undergone surgery to remove a blood clot that was interfering with his breathing.  Evidently, the embolism grew and “The Man” breathed his last on August 21, 1947.  His lifeless body lay untouched until it was removed by a black orderly.

Despite all the revelations about Bilbo’s unscrupulous nature, his funeral attracted more than five thousand mourners and most of Mississippi’s political elite.  There was even a bronze statue of Bilbo erected in the state capitol in Jackson.  It depicted the Mississippian with his arms raised and many members of the legislature use those arms today to hang their coats.

Theodore Gilmore Bilbo’s legacy of hatred has overshadowed his unwavering support for the less fortunate in society.  Clearly talented and blessed with a magnificent ability to speak, Theodore Bilbo frittered away his talent by using his talents to promote himself and denigrate other human beings.  Bilbo became the caricature of a Southern demagogue and used his office for himself and evil, rather than good.