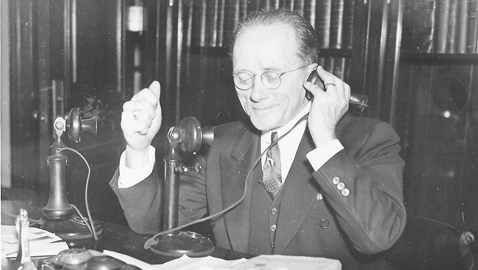 The art of politics has changed dramatically over the years. The age of truly gifted speakers who could move the emotions of audiences, bringing them alternately to laughter or tears is long gone.  Courthouse rallies and barbecues are already becoming things of the past, replaced by slick television advertisements, polling and focus groups.  Force of personality and intellect, much less the ability to think quickly on one’s feet, have been replaced by candidates with television friendly blue shirts and red neckties reading off teleprompters.  Theodore Gilmore Bilbo was from a different time and age; only five feet two inches tall, Bilbo was a genuinely masterful speaker.  Some said that while on the stump, Bilbo seemed ten feet tall.

Yet, Theodore G. Bilbo was also one of the most virulent racists ever to sit in the United States Senate.  In spite of his violent racism, Theo Bilbo was almost invariably found on the side of the underdog, the downtrodden and less fortunate in society, unless of course, one was a person of color.

Bilbo was a controversial figure, even at the height of his popularity and his toxic racism was a bit much for many of the Magnolia State’s residents.  Bilbo experienced the highs and lows of politics and served twice as governor of Mississippi, as well as United States senator.

Born October 13, 1877 in the tiny hamlet of Juniper Grove, Theo Bilbo was the child of poor white parents.  For the remainder of his life, Bilbo did all he could to help the poor, sick, and elderly.  Chester Morgan wrote an excellent biography of Bilbo, Redneck Liberal, which explored the strange enigma of Theo Bilbo’s loathsome racism and solidly liberal politics.

Little seemed to come easily to Theo Bilbo in life, save perhaps for his ability to speak and entertain audiences numbering in the thousands.  A gnomish-looking little man, balding with thin lips and a cruel mouth, Theo Bilbo was anything but handsome, yet considered himself a ladies’ man.

Bilbo was neither ignorant nor stupid; in fact, young Bilbo won a scholarship to attend Peabody Normal College in Nashville and went on to Vanderbilt Law School, although he did not graduate from either institution.  Early in his life, it became readily apparent Theodore Bilbo would regularly suffer ethical and moral lapses.

After briefly teaching school, Theo Bilbo commenced practicing law in Poplarville, Mississippi in 1907.  The law interested Bilbo little and he ran for the Mississippi State Senate in 1908 and won.  Bilbo was a disciple of the preeminent figure in Mississippi politics of the time, Governor James K. Vardaman.  The governor was rather a majestic figure, standing over six feet tall, with a head of jet black hair that flowed down to his shoulders, worn swept back dramatically from his brow.  Known as “The White Chief” due to his garb during the intensely hot summer months in Mississippi, Vardaman was resplendent in white from head to toe.  Wearing a white suit and white boots, the White Chief would come to speak in a small Mississippi town sitting atop bales of cotton in a wagon pulled by a yoke of forty white oxen.

The White Chief was a thorough racist as well; likely most any Mississippi politician of the time would be considered a racist by today’s standard.  Vardaman’s own racism was not quite as crude as that of Theo Bilbo’s, but it was merely a matter of degree.  It was Vardaman, when discussing educating African-Americans, who had snapped, “The only effect of Negro education is to spoil a good field hand and make an insolent cook”.

Vardaman was loathed by much of Mississippi’s political establishment, but he was a hero to many of the rural farmers and poor.  The term “redneck” was coined to describe Vardaman’s supporters, many of whom wore red kerchiefs about their necks to indicate their support for the White Chief.  Bilbo cut his political teeth in backing James K. Vardaman.

After leaving the governor’s office, Vardaman sought a seat in the United States Senate.  At the time, senators were elected by the legislature and a heated battle erupted in the State Capitol to replace Senator James Gordon, who had died.  Vardaman was considered the leading candidate.  Vardaman had narrowly lost a Senate race to Congressman John Sharp Williams in 1910 in a preferential primary ratified by the legislature.

The death of Senator Gordon opened up Mississippi’s other Senate seat and Vardaman confidently expected to be elected by the legislature.  Business and establishment interests backed wealthy planter LeRoy Percy for the vacancy and it was a hard fought battle.  Bilbo managed to distinguish himself, less for his support for Vardaman, than announcing he had allowed himself to be bribed by a supporter of LeRoy Percy.  Bilbo defended himself by claiming he had conducted his own investigation into bribery surrounding the election of a senator.  Bilbo’s colleagues took a very dim view of his “investigation” and tried to expel him from the State Senate, falling one vote short of the two-thirds majority needed.

Throughout his political career, Theo Bilbo knew no shame and was anything but chastened by quite nearly having been ejected from the State Senate.  Instead, he used the notoriety he had gained throughout the lurid episode to launch a statewide campaign, running for lieutenant governor in 1911.  Bilbo campaigned as a supporter of James K. Vardaman and was elected.

It was a typically colorful campaign for Bilbo and one of his witticisms from the stump led to his being pistol-whipped so badly that it left him unconscious, hospitalized and scarred for the rest of his life.  Bilbo, once lieutenant governor, had the resolution passed by the Mississippi State Senate, which had proclaimed him to be “unfit to sit with honest” men, expunged.

James K. Vardaman easily defeated Senator LeRoy Percy to win election to the United States Senate in 1912, but the White Chief’s popularity evaporated during his term of office.  Perversely, Vardaman obstinately refused to support American entry into World War I, enraging both President Woodrow Wilson and his constituency.

Theo Bilbo’s career continued its upward movement and he was elected governor in 1915.  Bilbo’s first administration as governor surprised even his critics for its progressivism and record of accomplishment.  By all accounts, Bilbo was a successful chief executive.

Senator Vardaman was challenged by Congressman Byron “Pat” Harrison in the 1918 primary and was defeated, almost entirely for his refusal to follow the lead of President Wilson in declaring war against Germany and her allies.

Bilbo left office as governor in 1920 and had no interest in resuming the practice of law.  Politics was Theo Bilbo’s profession and he sought to win a seat in Congress, but was defeated.  In 1922 former senator James K. Vardaman sought to make a political comeback.  Senator John Sharp Williams was retiring and Congressman Hubert Stephens was his heir apparent.  Unfortunately, Stephens was relatively colorless and something of a listless campaigner.  The White Chief was already then suffering from what was apparently a severe form of dementia.  Unable to do much more than sit on the platform while other speakers carried the burden of the campaign, Vardaman was aided by his former ally, Theodore G. Bilbo, who took up the Vardaman cause.  Bilbo spoke all across Mississippi on behalf of Vardaman and much of Mississippi’s political elite were shocked when the White Chief ran first in the primary.  They redoubled their efforts on behalf of Congressman Stephens and managed to win the run off election.

Bilbo was soon caught up in messy scandal involving his successor as governor, Lee M. Russell.  The governor was being sued by his former secretary, who claimed she had also been his lover and was now carrying his child.  Bilbo had been quite close to Russell and a subpoena had been issued for the former governor.  Eventually, Bilbo was found hiding in a barn.  Evidently Bilbo had attempted to dissuade the young lady from suing Governor Russell, but she did not win her suit.

The publicity did little to keep Bilbo from running for governor again in 1923, but he lost.  Bilbo was irrepressible and entered the 1927 election for governor, facing Dennis Murphree, who had become governor following the death of Henry Whitfield, who had died in office.

Bilbo castigated Governor Murphree for having called out the National Guard in an attempt to prevent a lynching.  Bilbo won the election in the run off and was once again Governor of Mississippi.

Theo Bilbo’s second administration was not a success.  The governor enraged much of the state by announcing he intended to move the University of Mississippi from Oxford to the state capitol, Jackson.  Bilbo did campaign hard in 1928 for the Democratic presidential nominee, New York Governor Alfred E. Smith.  Al Smith was not at all popular in the South as he was both “wet” and a practicing Catholic.  The South was the most reliably Democratic part of the nation at the time and Smith’s Catholicism caused a rebellion inside much of the South.  Senator Furnifold M. Simmons of North Carolina bolted to support Republican Herbert Hoover, as did Alabama Senator J. Thomas Heflin.  Regular Democrats fought hard to keep voters inside their own party and Bilbo observed neither the Catholic Smith nor the Quaker Hoover “had enough religion to hurt anything”.

As always with Bilbo, he broke the presidential campaign down to race, claiming Hoover had danced with a black woman.  Bilbo told audiences that Mary Booze, the woman with whom Hoover had allegedly danced, was “as black as the ace of spades”.

It was hardly the last campaign waged by Theodore G. Bilbo.