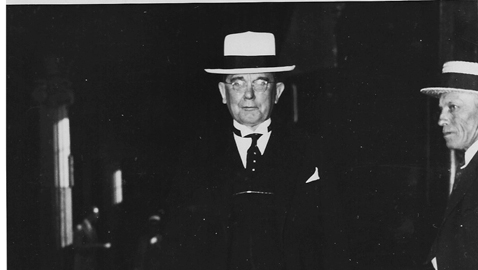 “I have got no horse no autmobel and no nothing to ride can you pleas if possible fix for me to get some help some way can you fix for me some way so my family will not purish.”

So wrote a man from Newcomb, Tennessee to Congressman J. Will Taylor on August 6, 1934.

It was typical of much of the correspondence flooding the offices of the Tennessee Congressional delegation.  The mails were full of pleas for help, requests for jobs, and material assistance.

Franklin Roosevelt, when accepting the nomination of his party, had said, “I pledge you, I pledge myself, to a new deal for the American people.”

President Herbert Hoover gamely campaigned for reelection and defined the presidential contest as less a race between two men, but rather between “two philosophies of government.”  A millionaire engineer by profession, Hoover had first won the admiration and respect of the American people by his efforts to feed the starving in Europe following the catastrophic World War.  Hoover had served as Secretary of Commerce during the administrations of Presidents Harding and Coolidge.  Yet he had never been elected to any office prior to being elected president.  Despite his background in humanitarian assistance, Hoover stubbornly insisted the suffering caused by the Great Depression could and should be alleviated by private enterprise and charity.  Roosevelt disagreed, saying the federal government had a duty to help when conditions were such that people could not help themselves.  FDR replied to Hoover that such help was “not as a matter of charity but as a matter of social duty.”

Roosevelt won the presidential election in a landslide.

As Franklin D. Roosevelt prepared to be sworn in as president, children were fainting in schoolrooms from hunger; families were being thrown out of their homes and apartments because they were unable to meet the mortgage or rent payments.  Some of those who had once been solidly middle class found themselves foraging for scraps in dumpsters and garbage cans to feed themselves and their families.

Tennessee was solidly Democratic; there was no senatorial race in the Volunteer State that year, but Hill McAlister had replaced Henry Horton as governor.  Horton left office a broken and discredited man and died not long after his retirement as chief executive.

When Franklin Delano Roosevelt assumed office in 1933, the Tennessee Congressional delegation was comprised of senior U. S. Senator Kenneth D. McKellar, newly appointed junior Senator Nathan L. Bachman and nine congressmen.  Carroll Reece had just returned to Congress after a two-year absence to represent the First District.  J. Will Taylor represented Tennessee’s Second Congressional District.  Sam D. McReynolds of Chattanooga represented the Third District and would chair the House Foreign Affairs Committee.  J. Ridley Mitchell of Cookeville represented the Fourth District.  Congressman Joseph W. Byrns, who was high in the Democratic leadership of the House and eventually rose to preside as Speaker, represented Nashville and the Fifth District.  Clarence W. Turner represented Tennessee’s Sixth Congressional District, while Gordon Browning served as the congressman from the Seventh District.  Jere Cooper of Dyersburg was the congressman from the Eighth District and the delegation was rounded out by Edward Hull Crump, the congressman from the Ninth District, which was composed of Shelby County.  Crump had originally decided to go to Congress in 1930, after concluding the incumbent, Hubert Fisher, who was increasingly deaf, was dispensable.

The only member of the Tennessee delegation new to Congress was  the just-appointed Senator Nathan L. Bachman.

President Franklin D. Roosevelt had no concrete plan to combat the effects of the Great Depression.  Roosevelt came into office fully and cheerfully prepared to improvise solutions to repair the ailing economy and aid the suffering of the American people, a notion which clearly horrified many of his advisors.

FDR’s sunny disposition and confidence inspired Americans and his inaugural address where he famously told his fellow countrymen, “All we have to fear, is fear itself” resonated with the people.  An astonishing 500,000 people wrote the president after his inaugural speech.

Roosevelt was the last president to take the oath of office on March 4; FDR hit the ground running, closing banks all across the country to prevent further panic and bank closures.  President Roosevelt announced he was sending out inspectors to verify the viability of banks.  By March 9, some 5,000 banks had reopened.

When one of his own sons was traveling out west and ran out of money, he contacted President Roosevelt to ask for help.  FDR cheerfully replied the banks were closed and he only had some $7 himself and the boy would have to make the best of a bad situation.

Roosevelt initiated his “fireside” chats on the radio, choosing to make his talks on Sundays, when most folks stayed close to home.  FDR’s strong and confident voice gave hope and reassurance to millions.  It was unprecedented for an American president to speak directly to the people through the most popular medium of the day.  Years later, scores of Americans would attest to the fact they felt as if Franklin Roosevelt had come into their homes to speak to them personally and in a way, he had.  Roosevelt’s talks were unlike the speeches made by most politicians; he assumed a friendly, homespun aspect to discuss the future of the country.  Indeed, he addressed his listeners as “my friends” and millions felt Franklin Roosevelt was surely their friend.

The first hundred days of the New Deal saw profound changes, as President Roosevelt proposed legislation, which was quickly passed by the Congress.  In short order, the first of the “alphabet” agencies came to life.  Congress rapidly approved the Civilian Conservation Corp, designed to put young men to work on national parks and planting millions of trees.  Very soon, some 2.5 million young men were employed and sending money home regularly to their needy families.  My own grandfather’s first job was with the CCC and he never forgot the experience.

From the CCC came the Works Progress Administration, which expanded the jobs program to all Americans.  President Roosevelt convinced Congress to appropriate $3.3 billion to put people to work at a time when the entire budget was less than $4 billion under Herbert Hoover.

The Agricultural Adjustment Administration was formed to help raise the price of crops for struggling farmers.  In some cases, the AAA actually helped to save the homes and farms of farmers who could not meet their mortgage payments.  Prior to Roosevelt’s election, farm prices had fallen to the point where farmers were better off not even planting crops.

The Federal Emergency Relief Administration was born, which immediately poured $500 million directly to provide help for those who were starving.  The FERA spent money to open and stock soup kitchens, started nursery schools, and much more.  The Federal Emergency Relief Administration also began pumping money into the various states, as most state and local governments were little better than bankrupt.  State governments began their own improvement and works projects.

The New Deal, having started programs to help farmers and the poor, did not forget business.  Congress approved FDR’s National Recovery Act, which created the Public Works Administration.  The PWA spent billions of dollars building up American infrastructure.  Post offices, roads, bridges, were built or repaired and the construction provided jobs for Americans.

Finally, the most important alphabet agency of them all, at least to Tennessee, was approved by Congress on May 18, 1933 creating the Tennessee Valley Authority.  Much of Tennessee’s farmland had been over-farmed, the soil was depleted and eroding.  Most of the valuable timber had long been cut down and flooding was common in the Tennessee Valley.

The TVA changed everything.

Senator McKellar, who had long promoted the idea of the Tennessee Valley Authority, while championing the interests of public power and protecting the state’s farmers, was bitterly disappointed that President Roosevelt did not allow him to sponsor the legislation creating the TVA.  That honor went to Nebraska Senator George W. Norris, a progressive Republican.  McKellar considered it the greatest disappointment of his long congressional career and he never fully forgave FDR for the slight.

Yet the TVA would never have succeeded and prospered had it not been for Kenneth McKellar.  If he could not be considered the “father” of the Tennessee Valley Authority, McKellar accepted the role of TVA’s “rich uncle.”

Legislation was introduced and passed by Congress to prevent the excesses on Wall Street, which helped to cause the crash of the stock market.  Congress approved the Glass – Steagall Bill, which made a clear delineation between banks and savings and loan institutions.

The new federal apparatus created millions of new jobs and Tennessee’s senior senator’s ability to secure his state’s fair share, made Kenneth D. McKellar a hero to thousands of hungry and desperate Tennesseans.  Most all of Tennessee’s congressional delegation were flooded with letters from frantic constituents asking for help.  Led by Senator McKellar’s persistence in producing projects and money for Tennessee, they delivered.