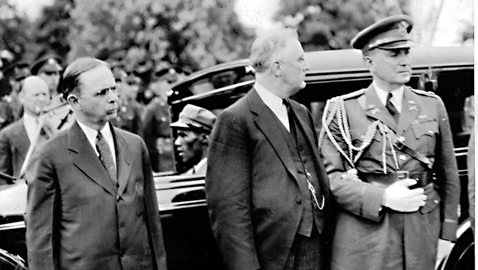 With Joseph W. Byrns of Tennessee assuming the Speaker’s chair in Congress, the Tennessee Congressional delegation in the House of Representatives faced a serious fight in protecting the Tennessee Valley Authority.

Senator George W. Norris of Nebraska, considered the “father” of the TVA, had proposed amendments to the original legislation.  Norris’s amendments would allow the Tennessee Valley Authority to issue bonds, which would in turn allow the agency to purchase existing power companies.  More importantly, it would clearly define the Tennessee Valley Authority’s right to be in the utility business.

Opposition to the Norris amendments solidified in the House Military Affairs Committee.  Some members of the Military Affairs Committee sympathized with the private power interests and were at heart opposed to the idea of the government competing with private business.  Others felt the Norris amendments would affect the outcome of litigation being tried that challenged the constitutionality of the Tennessee Valley Authority.

Realizing the threat to the TVA, Tennessee’s House delegation united to try and protect the agency and adopt the Norris amendments.  With the support of Speaker Jo Byrns, the delegation seized the bill and took it away from the jurisdiction of the unfriendly Military Affairs Committee.  Chattanooga Congressman Sam D. McReynolds later bragged, the Tennessee members “rewrote it just as we desired.”

The 1935 session of Congress was the “Second Hundred Days” of the New Deal.  Speaker Byrns gently prodded the House to become more productive, starting sessions earlier in the day and keeping the House in session later at night.

The two Republicans in the House of Representatives usually dissented from much of the New Deal proposals, while Democrats usually supported the president.  J. Will Taylor, the senior Republican in Tennessee’s House delegation, was strongly supportive of the Tennessee Valley Authority.  Taylor also supported the Guffey – Snyder Coal Act, as there were a considerable number of men employed in coal mines in his district.  Even many of the mine owners inside the Second Congressional District supported the Guffey – Snyder Bill.  Of the two Republican congressmen representing Tennessee, Carroll Reece was easily the more conservative of the two and was frequently bitterly opposed to New Deal legislation.  Reece was far more interested in having the federal government purchase the original home of the late President Andrew Johnson in his own district.

With passage of the Guffey – Snyder Coal Act, Congressman J. Ridley Mitchell of Crossville enjoyed a small victory.  Mitchell had made a crusade of prohibiting nepotism in Congress.  Congressman Mitchell had also proposed to reduce Congressional salaries, eliminate the mileage paid to congressmen for travel, and limit the number of employees in a congressman’s office.  Mitchell managed to tack on an amendment to the Guffey Act prohibiting the employment of relatives by the members of the coal commission.

The Tennessee Congressional delegation in the House of Representatives reached its peak of influence during the 1935 – 1936 session of Congress.  It was not to last.

Speaker Joseph W. Byrns presided over the House on June 3, 1936 and was pressing to complete its business by the end of the week.  While at home that night, Byrns had a heart attack and later a cerebral hemorrhage and died.  It was the first time a Speaker of the House had died while Congress was still in session.

The death of Joseph W. Byrns came as a profound shock to just about everyone, but was a terrible blow to his many friends in Tennessee.  Senators McKellar and Bachman quickly arrived at the late Speaker’s apartment to pay their respects to the newly widowed Mrs. Byrns.

Every member of Tennessee’s Congressional delegation was present for Byrns’s funeral, as well as many members of the president’s Cabinet, to file pass the late Speaker’s coffin.  Finally President Roosevelt personally appeared in the House Chamber to note the passing of Jo Byrns.  Sixty congressmen and twelve senators left on a special train for Nashville, to attend the final funeral services of the late Speaker.  President Roosevelt boarded his own train, headed for the same destination.

While Jo Byrns was not considered a strong leader by some, just about everyone agreed he had been a highly popular Speaker, with a highly developed sense of fair play.

The 1936 election brought about Franklin Delano Roosevelt’s overwhelming reelection.  Roosevelt carried every state in the union, save for Maine and Vermont.  Roosevelt’s coattails carried huge majorities into both the House and the Senate.  There were only sixteen Republicans remaining in the United States Senate; the GOP was little better off in the House with only eighty-nine members.

The late Joseph W. Byrns was succeeded by Richard M. Atkinson, who won the Democratic primary by a scant fourteen votes.  Gordon Browning revived his political career by running for governor.  Browning defeated Burgin E. Dossett, who had the support of Senator McKellar.  Crump broke with his long-time friend and political partner to support Browning.  Despite delivering more than 60,000 votes to Browning, Crump’s Shelby County did not make the difference in the race; the former Congressman won handily.

It was not long before Governor Browning faced a serious political dilemma; Senator Nathan L. Bachman died of a heart attack on April 23, 1937.  Bachman had been reelected to a six-year term in 1936 and had only served three months of his new term before dying.  Gordon Browning was faced with appointing a senator and he did not lack for advice.  It seemed just about every prominent citizen in Tennessee wanted to serve in the United States Senate.  At least two of the members of Tennessee’s Congressional delegation coveted the late Senator Bachman’s Senate seat.

Browning ended the speculation on May 6 when he appointed George L. Berry of Rogersville to serve until the 1938 election.

Berry was a curious choice to serve in the U.S. Senate.  Never having been elected to public office prior to his appointment, Berry had been quite active politically for decades.  George L. Berry had been president of the International Printer’s and Pressmen’s Union since he was twenty-five years old.  Unions were not a strong political force in Tennessee politics and Berry had no real political base to run to succeed himself.  Berry also came from upper East Tennessee, which was strongly Republican.

Gordon Browning cherished a burning ambition to serve in the United States Senate and while he dismissed the idea of resigning as governor so that his successor could appoint him to the senatorial vacancy, there is some evidence to support the notion Browning seriously considered running against his own appointee.  E. H. Crump maintained until the end of his life that Browning proposed a “trade”; according to the Memphis Boss, the governor proposed to run for the U. S. Senate in 1938 with Crump’s active support.  In turn, Browning would support Crump for the United States Senate in 1940 against Senator McKellar.

Internecine warfare was soon to erupt amongst Tennessee Democrats.  The two factions of Tennessee’s Democratic Party would fight a political battle to the death for dominion over the state.

Outside of Senator McKellar and Congressman J. Ridley Mitchell, most of the Congressional delegation tried to avoid the brawl.

The 1938 election was hard fought and Senator McKellar and E. H. Crump established firm control over Tennessee politics.  Nationally, the Republicans made a resurgence and quickly allied themselves with disenchanted conservative Democrats.  Many Democrats had been appalled by President Roosevelt’s proposal to enlarge the United States Supreme Court.  FDR’s furious reaction to those Democrats who had not supported his plan to pack the Supreme Court was instantaneous.  Roosevelt proposed to purge those apostate conservative Democrats.  President Roosevelt personally targeted and campaigned against several incumbent Democratic senators, but his purge was an abysmal failure.  It engendered deep bitterness and accomplished the almost impossible task of making opposition Democrats even more stoutly opposed to much of the president’s agenda.

That same bitterness is exemplified by a story, perhaps apocryphal, and attributed to either senators Walter F. George of Georgia and E. D. “Cotton Ed” Smith of South Carolina.

Supposedly, someone commented, “Roosevelt is his own worst enemy.”

Senator George or Senator Smith allegedly roared in reply, “Not while I am still alive!”

The statement would have certainly been in character for Cotton Ed Smith, who loathed much of the New Deal in general and Franklin D. Roosevelt in particular.

Aside from the court packing proposal, Congressman James A. Gavagan caused a stir amongst Southern Democrats when he sponsored an anti-lynching bill.  Most Tennessee congressmen opposed the bill, although the two Republicans, J. Will Taylor and Carroll Reece, were amongst the four Southern representatives who voted to discharge the Gavagan Bill from the Rules Committee.

Congressman J. Ridley Mitchell, anticipating his race for the United States Senate in 1938, jumped to his feet to denounce the Gavagan Bill.  Careful to say that lynching was horrific and indefensible, Congressman Mitchell declared “mob violence is wholly a state issue.”

Congressman Sam D. McReynolds, who as a judge had witnessed a brutal lynching, thought the Gavagan Bill would be ineffective.  He compared it to trying to enforce prohibition.  It was McReynolds’ belief that “the laws of this country cannot be enforced unless they meet with public approval.”

Despite having voted to discharge the bill from the Rules Committee, Congressman Carroll Reece did not speak for the Gavagan Bill.  Second District Congressman J. Will Taylor did rise on the floor of the House to speak for the bill.

Taylor, much to the discomfort of some members of the House, gorily verbally illustrated the lynching of two black Mississippi men who had been murdered only two days prior to the House debate.  Congressman Taylor noted the men had been tortured and killed with a blowtorch.  “Hillbilly Bill” sarcastically noted the local sheriff had been unable to recognize a single member of the lynching party, although that same official had admired the “orderly behavior” of the murderers.

The Gavagan Bill passed the House 277 – 120, with both Congressmen J. Will Taylor and Carroll Reece voting for it.  Only one Southern Democrat in the House of Representatives voted for the Gavagan Bill, which failed in the Senate.

Despite having won a smashing reelection and with huge Democratic majorities in both the House and Senate, Franklin D. Roosevelt was never able to translate that victory into passing his legislation in Congress in the 1937 session.  Roosevelt pressed for passage of the Wagner – Steagall Act, which established the U. S. Housing Authority.  The bill was intended to provide money for public housing in cities.  Neither Congressmen Taylor nor Reece liked the bill and opposed it, but they were joined by several Tennessee Democrats in opposing the legislation.  Congressmen J. Ridley Mitchell, Herron Pearson of Jackson, and Clarence W. Turner voted against the Wagner – Steagall Act.

Ridley Mitchell lost his bid for the United States Senate; Congressman Richard Atkinson lost his campaign for the Democratic nomination, defeated by the son of the late Speaker Joseph W. Byrns.  Death thinned out the ranks of the Tennessee Congressional delegation even more in 1939, claiming fully a third of the delegation.

Clarence W. Turner was the first to go, dying in the arms of his wife in the middle of the night on March 23, 1939.  Turner, at seventy-two, was the oldest member of the Tennessee Congressional delegation.

Congressman Sam McReynolds had hoped to run for the Senate in 1938, but allowed himself to be persuaded to remain in the House by President Roosevelt who disliked the idea of the Tennessean surrendering his chairmanship of the Foreign Affairs Committee.  McReynolds began ailing in the spring of 1939, suffering from heart disease.  McReynolds died that summer.

Another heart attack took J. Will Taylor away on November 14, 1939.

By the time the three Tennessee congressmen died, death had already claimed the New Deal.