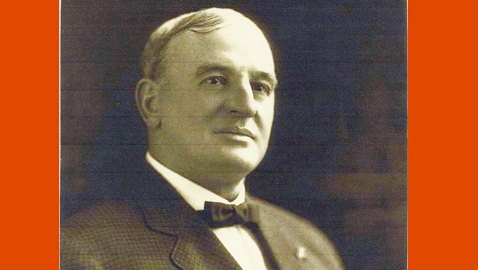 When one thinks of bossism in Tennessee politics, Edward Hull Crump of Memphis leaps to mind.  Much has been written about the Crump machine, but Hilary Howse of Nashville headed an equally potent and thriving political machine in Davidson County.

There are numerous similarities between the two urban political machines.

Like Crump, Howse was colorful and larger than life; but unlike Crump, Howse did not prefer working behind the scenes.  Howse was Mayor of Nashville from 1909 until 1915.  Driven from office in 1915 when the business establishment exerted control over Nashville’s city government, Hilary Howse bided his time.  He intended to wage a successful comeback and expand his political machine.

Born in 1866 near Murfreesboro, Howse moved to Nashville in 1884 and by the turn of the century owned a successful business in partnership with his brother Kai.  Deeply interested in local politics, Hilary Howse climbed the ladder, winning election to the Davidson County Court and eventually the Tennessee State Senate.

Howse campaigned for mayor in 1909, promising quite openly that he would ignore state law requiring the closure of saloons.  Not surprisingly, Howse was well funded by the liquor interests.  Howse was hardly secretive about his views; according to Don Doyle of Vanderbilt University, the mayor, when asked if he protected saloons from the existing prohibition laws, loudly exclaimed, “Protect them?  I do better than that.  I patronize ‘em.”

Like Crump in Memphis, Hilary Howse understood the importance of black voters.  Howse recognized a black vote counted every bit as much as a white vote at a time when it was considered heresy for Democratic politicians to seek the votes of African – Americans.  Indeed, the Democratic primary was frequently considered the “white man’s primary”.

Howse actively courted black votes and when he sought reelection as mayor in 1911, he slated Solomon P. Harris to run with him.  Harris was the first African – American to serve on Nashville’s City Council since the early 1880s, according to Don Doyle.

Again, like the Memphis machine, Mayor Hilary Howse extended services to the black community, providing a park, a hospital, a library and schools for the African – American community.  The Howse machine incorporated many of the poorer citizens and when someone was in need, the machine responded with coal to keep homes warm.  When families were hungry, the Howse machine delivered food.  Those voters remembered Hilary Howse at election time and supported the mayor and his favored candidates.

The poll tax was designed to keep the illiterate, the poor and working class citizens from voting in elections.  The “better” elements and businessmen felt that elections should be the private preserve of their own class.  The poll tax would provide a more intelligent class of voter.

The urban machines run by E. H. Crump and Hilary Howse destroyed that notion by collecting large campaign chests and part of that money was used to pay the poll taxes of loyal, albeit poor, voters.  Those same loyal followers were rewarded with favors and jobs.

Naturally, the business elite found Hilary Howse not only common, but also a genuine threat to what they perceived to be “good government”.  In 1913 they struck back, proposing a commission form of government, which was supposed to remove “politics” from local government.  Much to their dismay, Hilary Howse won a third term as mayor that same year.

The business leaders tried another avenue to drive Howse out of office, pouncing on a financial scandal brought about by grafters inside the mayor’s administration.  Business leaders were also becoming increasingly alarmed by Nashville’s burgeoning debt.  To their collective horror, Mayor Howse proposed to increase that debt when he proposed a massive bond issue in 1915.  The businessmen demanded Nashville’s books be audited by an independent auditor, a notion the mayor resisted.  Finally, having no choice, Howse agreed to allow an auditor to go over the city’s books after the businessmen had agreed to pay all the costs of the audit.

As the auditor boarded a train headed toward Nashville, Mayor Howse reluctantly confessed some of the accounting records and ledgers were inexplicably missing.  Some said Howse had sent the records to the bottom of the Cumberland River; others claimed the possibly incriminating record books had been incinerated.  Whatever their eventual fate, they were most certainly missing.

Infuriated, businessmen demanded Howse be removed from office.  The mayor adamantly insisted he was completely innocent of any wrongdoing.  Still, the pressure and outcry by citizens caused Howse to surrender his office by the end of July of 1915.

Howse caused a sensation when he appeared at the judicial hearing for the ouster suit and demanded to be put on the witness stand.  Howse freely admitted he had purchased liquor in supposedly dry Nashville, which positively shocked prosecutors.  The admission should have been damaging, but it took the wind out of the sails of his opponents.

Fully in control of the city government, the business leaders reigned supreme until 1923.  Even with politics supposedly removed from Nashville government, there was bitter factionalism and little real leadership.  Voters grew restive and nobody was more aware of that fact than Hilary Howse.

Howse’s absence from the mayor’s office was well spent; he found the time to marry Jennie May Wheeler.  For the rest of his life, Howse was prone to say, “The best thing I ever did in my life was when I got married.”

Hilary Howse also took the time to reinvent himself politically.

Renouncing his drinking and carousing, Howse presented himself as a sober, serious leader fully capable of running the local government.  His reputation was further burnished by the fact a grand jury looking into the case of the missing ledgers had exonerated him.  He also campaigned as, of all things, a reformer, much to the fury of business leaders and the Chamber of Commerce.

In spite of determined opposition from business leaders and the Chamber of Commerce, Hilary Howse made a triumphant return as mayor in 1923.  Howse would remake his machine and it would become stronger than ever.  Howse would remain as mayor until he died in office.

Howse’s political resurrection was aided by strong support from many newly enfranchised women voters who liked the story of the former mayor’s redemption, as well as his devotion to his wife.  Women flocked to the polls in droves to cast their ballots for Hilary Howse in 1923.

Once again installed as mayor, Howse returned to his program of bigger government and expanding social services for the working class and the poor.  And despite his claims of having reformed his own ways, Nashville was a booming place for businesses, legal and illegal.  Gambling establishments operated without interference from local law enforcement and bootlegging abounded.  The average voter cared less about the mayor’s questionable personal and political morality than his progressive  program of building hospitals, clearing out slums, and improving health care for citizens.

The tottering instability of local government during the reign of the Chamber of Commerce rule in Nashville all but evaporated when Hilary Howse returned to office.  There was no lack of leadership and Nashville grew rapidly during the first several years of Howse’s administration.  Nashville grew in part due to Howse annexing some neighborhoods into the city; other, more wealthy suburbs he avoided for obvious political reasons.  Hilary Howse did not propose to add more Chamber of Commerce adherents to the voter rolls.

Mayor Howse allied himself with the Crump machine in some statewide races.

When Governor Austin Peay distributed state money in the rural counties, with the urban counties bearing the brunt of the taxation, Howse objected loudly.  Howse and Crump supported the gubernatorial candidacy of State Treasurer Hill McAlister against Governor Peay in 1926.  McAlister fared well and ran strong in Tennessee’s more urban areas, but Peay won heavy majorities in rural Tennessee, barely surviving the challenge.  Peay died the next year and was succeeded by Henry H. Horton, Speaker of the State Senate.

Horton continued many of Peay’s policies, in spite of being himself a rural Tennessean.  The power in the Horton administration was Luke Lea, former U. S. senator and publisher and owner of the Nashville Tennessean.  Howse and Crump once again joined hands to support McAlister in 1928 when they unsuccessfully tried to dislodge Horton when he sought a term in his own right.  Once again, the primary election was very close and McAlister won huge majorities in Davidson and Shelby Counties.

Unable to elect their man to the governorship, they grudgingly made an uneasy truce with the Horton administration following the 1928 election.  Neither Mayor Howse nor E. H. Crump supported a candidate to oppose Henry Horton in 1930, but the governor was politically and personally destroyed with the failure of Caldwell and Company.

Caldwell and Company was the largest bank in the South and held almost $7 million in deposits from the State of Tennessee.  Rogers Caldwell was a personal friend and business partner of Colonel Luke Lea.  Caldwell and Company was considered “too big to fail” and when it closed its doors just after the 1930 general election, the impact was devastating and instantaneous.  It caused other banks in Tennessee to fail, frightened depositors who hurried to withdraw their own savings and further imperiled the stability of many more banks.

The urban machines roared back to life; Crump and Mayor Howse called for and supported the impeachment of Governor Horton.  The governor was beset with troubles on all sides and only through the most brutal use of his office and powers was Henry Horton to narrowly escape being impeached.  Horton could have run for another term in 1932, but chose not to, realizing he could not be nominated again.  Luke Lea’s publishing empire came crumbling down and he eventually found himself confined to a North Carolina penitentiary.

The Great Depression did not diminish the popularity of Mayor Hilary Howse.  Howse avidly sought federal help for Nashville and Tennessee’s senior U. S. senator, Kenneth D. McKellar, delivered results for Tennessee.  During the first eighteen months of the New Deal, some $300,000,000 poured into Tennessee.  Howse continued his expansion of Nashville.  It should come as no surprise Mayor Howse was a strong supporter of Senator McKellar.

Mayor Howse admitted he was well off financially, but was quick to point to his furniture business in downtown Nashville.

“No man can live in politics except to lose money by doing it,” Howse opined.  “I’ve made a lot of money since I’ve been here, but I couldn’t have done what I’ve done unless I’d been in business.”

The machine headed by Hilary Howse in Davidson County was formidable.  Howse only lost one mayoral election in his long career and occupied the office for an astonishing twenty-one years.  Unlike the Crump machine in Memphis, the Howse machine did not control every aspect of Davidson County’s own politics, but it quite nearly did.

Hilary Howse began ailing before the New Year arrived in 1938.  Seventy-one years old, Mayor Howse was taken to the hospital complaining about an aching stomach.  His illness was publicly referred to as an “intestinal disorder,” but Howse soon developed pneumonia.  He died around noon on January 2, 1938.

The whiff of scandal and corruption was never far from Hilary Howse, but he remained highly popular with the people of Nashville.

Like the Crump machine in Memphis, the machine so carefully built by Hilary Howse did not long survive him.