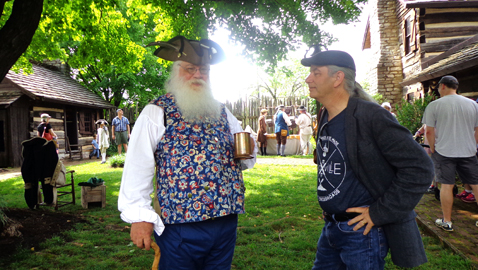 James White, the founder of Knoxville, was at Fort James White Fort recently to commemorate the State of Franklin Day. So were John Sevier, William and Mary Blount, and many other period costumed characters. The characters, all members of Tennesseans for Living History, were at the fort as various historic figures and greeted visitors.

The Living History group returned to the fort recently for a State of Franklin Day.

The spirit of James White walked the grounds at the fort during the Franklin celebration in the person of Mike Walker. Robert Woods took on the role of William Blount and Lynn Fox appeared as John Sevier. Other members of Tennesseans for Living History to participate in the event included Peggy and Levi Laxton, Sara Grace Walker, David Dailey, David Adams, Jerry Mustin, Paula Green, Rachael and Mike Walker, Chip Bailey, Miranda and Peggy Hall and many others.

The fort’s founder, James White, came to what would become Knoxville and built a two-story log cabin in 1786. He soon enclosed the cabin and other buildings with a stockade fence and opened his home for trade with the regional Cherokee. He sold lots and developed the town and soon played a part in the short-lived State of Franklin.

White arrived with a land grant of 1,000 acres for his service in the Revolutionary War. He talked with the Cherokee about treaties and opened his fortified home for the peace talks and trade with the tribe. In 1791 White set aside part of his holdings to establish a town.

With the help of his son-in-law, Charles McClung, sixty-four lots were laid off, each with about an acre of land. White named the new town for Henry Knox, the first Secretary of War.

White lived at the fort until 1793 when he moved up river and was later promoted to General in the War of 1812. He was involved in the formation of the First Presbyterian Church and Blount College, which became the University of Tennessee.

The White family played a very important part in the early history of Knoxville. James’ son, Hugh Lawson White, became a U. S. Senator and candidate for U.S. President.

The original logs from White’s home and fort, preserved for many years, were used in the 1970 relocation and restoration of the fort by the City Association of Women’s Clubs. The fort’s daily features include open hearth cooking, blacksmithing, and spinning. More than 10,000 visitors tour the fort each year to experience the frontier lifestyle.

On June 25th the fort will take part the Knoxville Homecoming to mark the 225th celebration of the founding of Knoxville and on July 4th the Sons of the Revolution Celebration takes place with a flag ceremony, reading of the signers of the Declaration of Independence, and free admission.

You can get more information about the James White Fort and its events by Googling it or calling 865-525-6514.

Tennesseans for Living History meet monthly at the David Hall Cabin near the Bull Run Steam Plant and you can contact them by calling 865-719-9947 or find them at “Tennesseans4livinghistory” on Facebook.