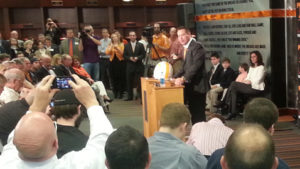 You can’t spell “Butch” without U-T…

After 19 days and reportedly three failed attempts, the University of Tennessee announced that Cincinnati’s Butch Jones would become the 24th head coach in Vols history.  He agreed to a six year deal, worth $18.2 million (plus incentives).

“It is truly an honor and a privilege to be the head football coach at the University of Tennessee,” said Jones in a statement released by UT.  “I understand the values, traditions, and level of expectations that come with this position, and I look forward to being a part of the Vol Nation.”

On Friday, December 7, Jones, his wife Barb, and their three sons, were given a formal introduction at a packed press conference held inside the Peyton Manning Locker Room at Neyland Stadium.

Tennessee athletic director Dave Hart, who has taken his share of heat on social media during the coaching search, said that he knew how much Jones was excited about the opportunity, when they sat down for an interview the previous evening.

“It was not 20 minutes into our conversation that lasted through the night that I could see genuine passion,” said Hart. “It wasn’t artificial when he said… ‘Dave, this is my dream job.’ I knew that that was coming from his heart.”

During the press conference, Jones sent a message to Vols fans, some of whom were not happy about his hiring.  The dream of bringing former Super Bowl winning coach Jon Gruden back to Tennessee was dashed, as was the chance to hire Oklahoma State’s Mike Gundy.  Louisville coach Charlie Strong almost said yes to the Vols, but eventually turned down Tennessee’s job offer.

Those were household names to many Vols fans… Jones was not.

Jones brings six years of head coaching experience with him to Knoxville. Three years at Central Michigan were followed by three years at Cincinnati.  In that time, Jones’s teams compiled a 50-27 record, along with four conference titles.

In many respects he is the antithesis of his predecessor, Derek Dooley… which shouldn’t be a surprise since Lane Kiffin was a complete opposite of Phillip Fulmer and Dooley was much different than Kiffin.

While Dooley reportedly burned bridges with high school coaches in the state of Tennessee and failed to develop relationships with Vols alumni, Jones is preaching another approach in both respects.

Jones added: “Let me make no mistake about it we are going to win first and foremost with the great state of Tennessee. We have tremendous high school coaches in this state. We are the state institution and we will own our state. We’re gonna to be at every high in the state and our players are going to understand what is to wear the ‘Power T,’ they’re going to understand what it means to represent their home institution. I take great pride in that.”

Jones understands the challenges that lie ahead.  Tennessee has had three losing seasons in a row.  Their defense was one the worst in the nation last year. The Vols offense could lose their quarterback and their top two receivers to the NFL draft.  Plus, the schedule is brutal in 2013, with road games at Oregon, Florida and Alabama on the docket.