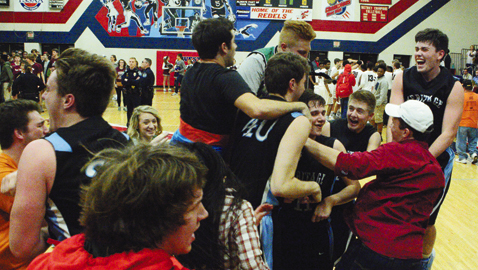 Through a lifetime of coaching, Bill Duncan knows something that’s hard to beat.

“Everybody talks about winning,” said Duncan, Heritage High’s veteran boys basketball coach. “It’s not about winning. It’s about the will to win.”

Duncan said his players had just that going for them as they pulled out a 67-64 overtime win over No. 3 seed Bearden in the District 4-AAA tournament championship game Tuesday night at West High School.

“The last three weeks we decided we had the will to do that and we worked hard,” he added.

The reward was the Mountaineers’ first-ever district title.

“This is the second time in two years we’ve been in the district championship – another school record,” noted Duncan, who is in his fourth season at Heritage and 43rd year overall. “We’ve averaged 20 wins a year the past three years. I’m really proud of them. We’ve come a long way.”

Actually, Heritage and Bearden didn’t get to play the title game last season due to a string of postponements created by wintry weather. That wasn’t the case this year and the nip-and-tuck contest went right down to the wire.

With his team clinging to a one-point lead, Heritage’s J.P. Pearson, a 5-9 junior, took a charge with 11.4 seconds remaining – one of the biggest defensive plays in the game. Teammate Blake Ervin was fouled right away and made two free throws to up the Mountaineers’ lead to three.

Quez Fair’s 3-point attempt to tie hit off the back of the rim. The Bearden senior guard had made a 3-point shot from the left wing with five seconds to go in regulation to tie the game and force overtime.

“It was a great high school game,” said Bearden coach Mark Blevins. “It was almost like every possession was critical. Hats off to Heritage. They played an outstanding game, Coach Duncan did a sensational job and all their kids played well. And our kids did, too.”

Ervin, a 6-3 senior, scored 26 points, including 10 in the fourth period and eight in overtime, to lead Heritage, 22-12 and the No. 5 seed in the tourney. Brandon Davis added 15 points, tournament MVP Cameron Allison 14 and Lee Yates 10, including three big 3-pointers.

“When Lee comes off the bench and makes two 3-point shots in a game, we never lose,” revealed Duncan.

“You can’t say enough about Quez Fair,” said Blevins. “He’s held this team together through all the adversity we’ve had this year. He’s some kind of leader.”

Yates’ 3-point shot from the right wing with one second to go in the first half kept Heritage within one (26-25) and gave the Mountaineers momentum going into the dressing room.

The lead swapped hands eight times in the third period. Smith’s hook shot in the lane gave Bearden a three-point advantage (40-37) and Heritage couldn’t get a shot off in the period’s closing seconds.

The Bulldogs stayed in front or tied until Yates swished in a 3-point shot from the left corner with 3:35 to go in the fourth period. Heritage nursed a slim lead down the stretch until Fair’s dramatic trey evened the score.

Two foul shots by Allison gave Heritage a four-point lead (63-59) with 1:15 left in the extra period.

Bearden sophomore guard Dakota McGowan, however, made two outstanding defensive plays to keep his team in it. The first gem had him intercepting the ball and throwing it off a Heritage player’s leg and out of bounds.

Fair cashed in with a layup and free throw to make it 63-62.

McGowan then dove to the floor to come up with a loose ball. Fair again capitalized with two foul shots to put Bearden ahead 64-63.

After Duncan called timeout with 35 seconds left, the Mountaineers displayed their will to win, with Ervin making a layup, Pearson absorbing a charge and Ervin hitting two clutch free throws.

Heritage and Bearden both earned home court berths for Region 2-AAA first-round games, which were scheduled this past Saturday. Heritage was to host Central , while Bearden was to entertain Powell.