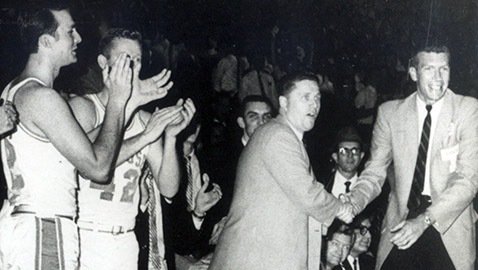 Ray Mears not only made orange a household color in Knoxville, but wherever else Vol fans might have gathered. Orange became a respectable color to wear to the games. He coined the phrase “Big Orange Country,” despite assertions to the contrary. Tennessee basketball became a “must-see” event.

There is no greater tribute to Ray Mears than the sea of orange in the stands at Vol sporting events today. It all started ever so humbly, as businessmen started wearing orange neckties to the games.

Mears was on the Tennessee sideline in an orange blazer from 1962-77, pulling up the Vol basketball program by its bootstraps into a position of national prominence.

Mears roared into town in the spring of 1962, a few months short of his 36th birthday off a national championship at Wittenberg (Ohio) College, with gimmicks by the bushel and a burning desire to succeed.

U.T. president Dr. Andrew D. Holt, who wore an orange blazer to Vol home games himself, had challenged everybody involved in the athletics program to do better. It was a time for the Tennessee athletic program to reach for the stars.

Mears, Doug Dickey, Chuck Rohe, and numerous others were brought on board, and they did nothing but win.  It was a marvelous time to be a Vol fan. The Vol program began to develop a swagger.

When Mears arrived, the Vols were playing in the rarely filled 7,500-seat Armory Fieldhouse. Four years later, the Vols opened the 12,700-seat William B. Stokely Center, an expanded version of the Fieldhouse.

The accomplishments of the Mears program over the years ultimately helped lead to the reality of Thompson-Boling Arena.

The Vols won the SEC the first year Stokely was open (1967), twice more in the years ahead.  Vol hoops were catching everybody’s attention. A statewide radio network became a reality.

When Mears first arrived in town, he almost turned around and went home, according to journalist Marvin West.

It was a hot spring day in 1962, when someone suggested it might be good for the players to be playing a pick-up game on the old concrete courts near Shields-Watkins Field on Mears’ arrival.

The game started at 3 p.m. and was still going strong at 4 p.m., with no Mears. Finally, when all was nearly lost, Mears arrived.

“We were wilted and dragging, one short jump shot from dead,” said A.W. Davis, Mears’ first great player and 1965 All-American selection.  “Coach Mears nodded. He did not appear to be particularly impressed.”

Vanderbilt and Kentucky were the two biggest names in the SEC in the 1960s and Mears took each of them on with a vengeance.

The Vols swept Kentucky in his first season, Vanderbilt in the second, and game nights in Knoxville and other venues as well were starting to get fun.

Mears had his own brand of “Memorial Magic.” In his coaching career against Vanderbilt, Mears’ teams were 20-10, 9-6 in Memorial Gym, to go with an 11-4 mark in Knoxville.

“Ray Mears was not a good coach,” said former UK coach Joe B. Hall. “He was a great coach. From such competition, great, and contentious, rivalries grow.”

Vol fans today don’t know what they missed by not seeing a Ray Mears-coached University of Tennessee team play at the Armory-Fieldhouse, Stokely Athletics Center, or at any other venue.

Fans arrived early for all the home game hoopla, from a pre-game routine in which the players warmed up to the strains of “Sweet Georgia Brown,” to the pep band marching around the arena as it made its entrance. A large American flag was unfurled from the ceiling. The Vols were introduced with the house lights dimmed, a spotlight focused on a large Big Orange “T.”

Ray Mears, the man in the orange blazer all those years, got the job done, just as McDonald had prophesied.

He was the right man at the right time for the University of Tennessee.