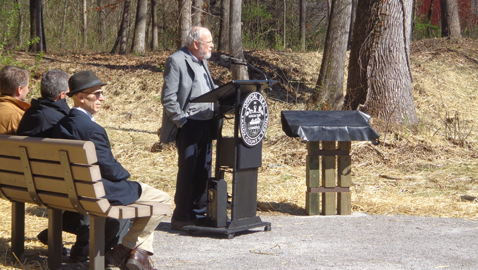 By Mike Steely
steelym@knoxfocus.com
There is one less undiscovered Civil War site in Knoxville. A Third Creek cannon embankment, known as a “Redan,” was discovered about 10 years ago by Dr. Charles Faulkner as he and his wife walked along the greenway there and the site was officially dedicated earlier this month.
Many Civil War sites in our area have been plowed over, built on or paved over. There were literally dozens of Confederate and Union fortifications, batteries and camps in the county. Most were built by Union Forces following the capture of Knoxville. Many of the artillery sites were probably built by African American Union troops.
The First United States Colored Troops Heavy Artillery Regiment was formed in January of 1864 and commanded by General Davis Tillson, who commanded the defenses in East Tennessee. The commander eventually reported some 1,700 members in the regiment.
Tillson was mentioned by Dr. Faulkner as he addressed a gathering just off Sutherland Avenue near the railroad bridge, beneath where the greenway passes. The breastwork or earthworks were built up to contain two cannons, both of which faced the former wooden railroad bridge, defending against any attack by Rebel forces.
Speaking at the ceremony were Dr. Faulkner and his wife, Knox County Mayor Tim Burchett, Knoxville Deputy Mayor Bill Lyons, and County Parks and Recreation Director Doug Bataille. Burchett and Dr. Faulkner noted the early involvement of former Commissioner Tony Norman, now a school board member, for his efforts.
“He was keeping me informed,” Faulkner said of Norman, who attended the event as an audience member. Also present in the audience were former Mayor Victor Ashe, Legacy Parks Director Carol Evans, and Councilman Daniel Brown.
Faulkner said that the site was cleared by Sheriff J.J. Jones and Ivan Harman, who was enlisted by Norman. He thanked former Mayor Bill Haslam for his effort and noted that the property was bought by Tim Zitman and donated to Legacy Parks, which donated it to Knox County in 2010. Talks are underway to possibly transfer ownership of the fort site to the city. Faulkner noted that Robin Easter designed the historic marker now at the site.
Faulkner said the little fortification may be the best preserved of the “redan” forts in the area and called it “pristine.”
The retired University of Tennessee archeologist, currently completing another historic book along with his wife about Fort Sanders, said that the African American soldiers were in charge of building and maintaining the Union forts in and around Knoxville. They manned the large and small cannons and served from 1863 until the end of the war.
As a train passed during Faulkner’s remarks he pointed out that the railroad was the reason for the location of the fort. Of the supporters of the project he said, “They have been a constant reminder of how important the Civil War was to our region.”
At least nine artillery battery sites are known to have been built in Knoxville by Union forces as well as six larger forts. During the war more than 25,000 African Americans served the nation in Artillery Units.
The Third Creek Redan is just a brief walk from the Sutherland Avenue entrance to the greenway. The site is just to the left of the pathway just before you reach the concrete railroad bridge.
As Doug Bataille told the audience, Dr. Faulkner’s finding of the earthen fort has added another positive aspect to Knox County greenways: historic value.