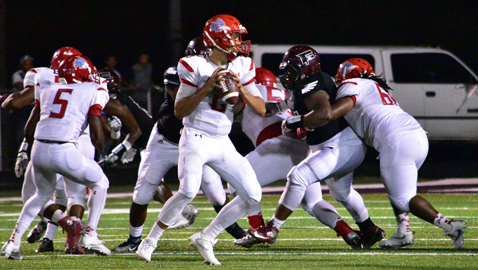 Austin-East finally made some noise in an old city rivalry Friday night and the echoes rumbled across the state. Better take the Roadrunners seriously in the Class 2A playoffs this season.

A-E made the short trip to Broadway and stunned Fulton 20-13 for its first win over the Falcons in five years. Fulton had averaged 59 points per game against the Roadrunners and captured three Class 4A state championships since the last time Austin-East won in this series.

It wasn’t one-sided this time.

The veteran Roadrunners matched the Falcons in team speed and overcame a disadvantage in depth with preparation and grit.

Seniors Kashif Warren and Darius Harper hooked up twice for touchdown pass plays and junior Jahson Jackson gave Austin-East its first lead late in the game when he scooped up a botched punt attempt by Fulton and scored.

Freshman Isaiah Ligon foiled a Falcons’ scoring threat in the closing seconds when he intercepted a pass at the A-E 5-yard line. With only 6.9 seconds left, Harper took a knee to set off a long-awaited Austin-East celebration.

“I’m proud of our kids for staying together and playing hard,” said fourth-year A-E Coach Jeff Phillips. “Nobody gave us a chance in this game, and rightfully so, because we’ve been blown out four years in a row. Finally we stepped up and played.

“It’s a great win over our rival. Tonight shows we have the ability to play for the state. But this win only means something for our program if we play in Cookeville.

“It made the rivalry interesting again. But we’ve got to keep playing.

“Our defense played exceptional. They actually played like a Roadrunner defense.”

The game started like it was going to be an offensive shootout.

Big back Chaton Mobley blasted in for a TD from two yards out to cap Fulton’s opening possession. His score came after Xavier Malone hit DaShaun McKinney over the middle for a 53-yard gain and Nigal Davis’18-yard run to the 2. Nana Boateng’s PAT kick glanced off the right upright and through for a 7-0 lead with 10:42 on the first quarter clock.

Austin-East answered as Harper connected with Warren, who broke a tackle at the 50 and raced to the end zone for a 67-yard scoring play at 9:29. Eduard Hakizimana’s extra-point kick was blocked, leaving the Roadrunners behind 7-6.

There would be no more scoring until late in the third quarter.

That’s when Malone, from the A-E 17-yard line, hit Coryean Davis just inside the left sideline and he sprinted in for a touchdown. Boateng’s PAT kick was wide right, keeping the difference seven points (13-6) with 2:33 on the clock.

On the first play of the final quarter, Harper passed 10 yards to Warren coming across the back of the end zone to cap a 78-yard march. Hakizimana’s line drive kick tied the score 13-13 with 11:52 remaining.

Turnovers and defensive play dominated much of the next nine minutes with neither team threatening to score.

But with Fulton in punt formation at its 41with three minutes to go, Austin-East got the break it needed. The punter bobbled the snap and the ball was knocked out of his hands by Coby Colquitt as the Roadrunners rushed in. Jackson scooped it up at the 25 and scored to give A-E its first lead in the game. Hakizimana’s PAT kick made it 20-13 with 2:45 left.

Fulton wasn’t done. The Falcons moved to the Austin-East 27 after Malone’s 18-yard pass to Zack Dobson. But on the next play, a pass by Malone was tipped and fluttered into the waiting hands of Chris Hunter at the 25-yard line with 1:28 on the clock.

The Falcons used their remaining timeouts and got the ball back with a minute to go at their 45. Three pass completions, starting with a 24-yarder to JaShaun Fenderson, put the ball at the A-E 16 with 26 seconds left. A second down pass intended for Dobson, however, was intercepted by Ligon.

“I expected a tough game. Number 1 it’s a rivalry game and Number 2 they have really good athletes. I think they wanted it more than us. We just struggled.”