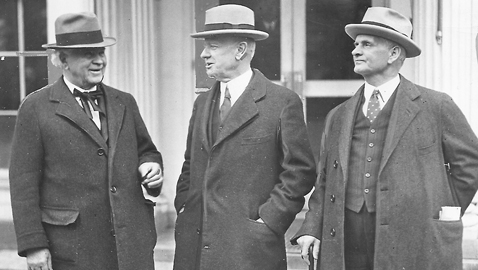 Tennesseans recall our own two senators named Gore, but there was another, who was apparently a distant cousin, Thomas Pryor Gore. T. P. Gore accomplished much and enjoyed a long and successful career in spite of being blind. Gore had suffered two different childhood accidents that left him completely blind. Thomas P. Gore’s affliction did not confine him to the life of an invalid; in fact, he excelled in his profession as an attorney and became a much sought after speaker. Gore was also the grandfather of the late author and personality Gore Vidal.

T.P. Gore had been born in Mississippi and became deeply interested in politics well before he could vote. According to Gore’s biographer, Monroe Billington, the future senator made his first political speech when only eighteen years old. At twenty he became a candidate for the Mississippi House of Representatives, but was forced to abandon his campaign when it was pointed out he would not be twenty-one before the election.

Well before he was thirty years old, T. P. Gore was recruited to campaign for candidates in other states. Gore traveled to Corsicana, Texas to campaign on behalf of populist candidates in the area. T. P. Gore later decided he liked Corsicana well enough to move there and commence practicing law. When it became apparent the Populist Party would not afford him a vehicle to rise in politics, Thomas P. Gore smoothly transitioned himself into the Democratic Party. Gore also just as quickly abandoned Texas, moving to the Indian Territory, which eventually became the State of Oklahoma. Gore opened a law office and bought a home in Lawton.

Almost immediately, Gore set out to carve a name for himself in his newly adopted home. T. P. Gore was a delegate to the Democratic Territorial Convention in 1902.

According to Professor Billington, Gore instantly charmed his fellow delegates and “tickled the ears” of his listeners.

“I would rather be a humble private in the ranks of those who struggle for justice and equality than to be a minion of plutocracy, though adorned with purple and gold,” Gore cried.

Florid and baroque by current standards, Gore’s speech was hailed by many who heard it to be the finest oration they had ever heard. It certainly propelled Gore to political recognition, as he was nominated by Democrats to serve on the Territorial Council to represent two Oklahoma counties. Gore was so certain that he would be elected, he campaigned little for himself, preferring to travel all across the Oklahoma Territory on behalf of William Cross, the Democratic nominee for Congress. T. P. Gore fully expected his travels to pay handsome political dividends for his own future and indeed it did. The people Gore met and the friends he made during that campaign paved the way for his election to the United States Senate five years later.

Gore made no secret of his ambitions, readily admitting he would very much like to serve in the U. S. Senate and he hankered to be one of the first senators to represent Oklahoma when she became a state.

Naturally, Thomas P. Gore actively pushed for statehood for the territory. Once statehood became a reality, T. P. Gore was nominated, along with Robert L. Owen, to serve in the Senate. Both were duly elected by the state legislature.

Senator Gore quickly earned a reputation as a fighter for the people, a foe of privilege and monopoly. Gore was a progressive and early in his Senate career joined fellow progressives attempting to defeat the Aldrich – Vreeland Emergency Currency Act. Senator Nelson Aldrich of Rhode Island was to have a famous grandson himself, Nelson Aldrich Rockefeller.

Gore relieved Missouri Senator William J. Stone and began speaking at length and his disability did indeed prove to be a handicap as he expected the Missourian to rest for a bit and return to the Senate Chamber to resume speaking. Gore was told Senator Stone had returned to the Chamber and the Oklahoman concluded his speech and waited to hear Stone’s voice. Unfortunately, William J. Stone was not in the Senate Chamber at the time and the floor was taken by a supporter of the Aldrich – Vreeland Bill. Whether Gore had been the object of a cruel hoax or whether Senator Stone had stepped out of the Senate Chamber briefly without realizing Gore was about to conclude his speech remained a mystery. The supporters of the Aldrich – Vreeland Act immediately insisted upon a roll call vote, which passed.

Gore had to run for a full six-year term in 1908 and was reelected. In 1912, T.P. Gore became an ardent supporter of New Jersey Governor Woodrow Wilson for the presidency. Senator Gore traveled to Wisconsin to speak on Wilson’s behalf and won half of Oklahoma’s delegates to the Democratic National Convention for the New Jersey governor. During the convention Wilson was an underdog to Speaker of the House Champ Clark, who had the support of a majority of the delegates. Unfortunately for Clark, party rules required a nominee to be selected by winning two-thirds of the delegates. Gore campaigned relentlessly for Governor Wilson and eventually the Speaker watched helplessly as his support crumbled.

Gore’s political footing was not always sure; the Oklahoma senator was roundly condemned by the National Suffrage Association, who published a list of those members of Congress who presented the greatest obstacle to women being given the right to vote. Listed among those members was Oklahoma’s Thomas Pryor Gore. Senator Gore had indeed voted against giving women the right to vote, but later reversed himself and began speaking on behalf of suffrage for women.

After just six years in the United States Senate, Gore rose to become Chairman of the Senate’s Committee on Agriculture and Forestry. It was a position of influence at a time when much of the country was an agrarian society. It was especially important in Gore’s home state of Oklahoma. The following year, Gore was reelected to the Senate for another six-year term.

Despite his position of prominence inside the Senate, it would be a difficult time for T.P. Gore. Senator Gore had campaigned in Oklahoma as an opponent of “militarism”, a stance that became less tenable as America edged ever closer to entering the World War. Gore had been highly alarmed when war loomed between the United States and Mexico. Senator Gore begged President Wilson to arrange for a neutral zone between the two countries.

Gore loudly and vociferously condemned the malefactors of wealth as being the impetus for pushing America towards war. Senator Gore blamed munitions makers, bankers, corporations, and industrialists as the culprits for inducing hysteria for waging war. It soon became readily apparent T. P. Gore was a pacifist.

The German Empire’s submarine warfare had sent numerous ships to the bottom of the oceans, frequently carrying American passengers. Former president Theodore Roosevelt lambasted President Wilson for not immediately declaring war on Germany. Millions of Americans were incensed by the submarine warfare, which had killed women and children.

Senator Gore introduced legislation that would have prohibited Americans from booking passage and traveling on ships belonging to belligerent countries. His bill went nowhere and Gore resorted to sponsoring a resolution which did little more than purport to express the disapproval of the Congress of those citizens who chose to travel on armed ships.

Gore did support Wilson’s espionage bill, but quickly regretted his actions, sadly concluding the legislation “has already been used or abused to throttle freedom of speech and freedom of the press.”

Woodrow Wilson remained popular in Oklahoma during the World War and many Sooners were appalled by what they perceived to be their senator’s refusal to support the war. Gore’s popularity in Oklahoma plummeted. According to Professor Billingsley, of 225 Oklahoma newspapers, not even one supported Senator Gore in an editorial for his positions.

Once the United States had entered World War I, T.P. Gore spoke out to urge Americans to buy war bonds. “It is as much a public duty to buy bonds as to pay taxes,” Gore said. “The man with the pocketbook must stand back to back with the boy with the bayonet.”

Evidently Gore did not feel likewise when it came to a particular Oklahoma interest: oil. Senator Gore attached an amendment to the War Revenue Act of 1918, which began the discovery depletion allowance; in effect, the Gore amendment exempted from the income tax all revenue from oil which represented capital. Prior to the adoption of the Gore amendment, oil producers had paid more taxes when the oil depletion allowance had been based upon cost.

Senator Gore bitterly disappointed President Woodrow Wilson when the Oklahoman supported Wilson’s cherished dream of U. S. entry into the League of Nations with reservations. President Wilson had been adamantly opposed to the idea of any reservation being attached to the League proposal, an attitude his opponents used to make the stricken chief executive appear to be unreasonable. The fact the reservations had been sponsored by Massachusetts Senator Henry Cabot Lodge, whom Wilson hated, made it all the more bitter. Senator Gore was one of only four Democrats in the Senate who spurned the president’s plea not to vote for the League with reservations.

Oklahoma Democrats watched with horror T. P. Gore’s actions and it became apparent there would be an intraparty fight should he seek reelection in 1920. Gore was equally determined to run for reelection. Facing Congressman Scott Ferris in the Democratic primary, Gore campaigned all across Oklahoma, but his record in the Senate became too much of a burden for him to carry. Senator Gore lost, winning only 43% of the vote.

Gore competed against two other significant candidates for the nomination; former governor Jack Walton and Congressman Everette B. Howard. Walton had been removed from office and was largely discredited, but won the primary with just over 30% of the vote. Congressman Howard had 28% of the vote and Gore trailed a distant third with close to 19% of the vote. It was a humiliating showing for a man who had once been one of the most popular politicians in the state.

Yet, Thomas P. Gore was not done with politics, nor was politics done with T. P. Gore.