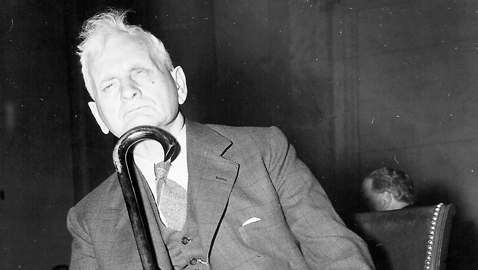 By Ray Hill
Thomas Pryor Gore had been one of two of Oklahoma’s first United States senators.  Twice reelected, Senator Gore had been decisively defeated inside his own party when he sought reelection in 1920.  Gore’s opposition to the World War and President Woodrow Wilson had been highly unpopular with his fellow Democrats.  Gore had sought a comeback in 1924 when he ran for the U. S. Senate again and ran a poor third, mustering less than 19% of the vote.

Completely blind, yet a spellbinding orator, T. P. Gore had become a highly successful attorney, but it became clear he still had political ambitions.  Republican Senator William B. Pine, an oil millionaire, had been elected to the U. S. Senate in 1924 and was running hard for reelection in 1930.  The Great Depression and the increasing unpopularity of President Herbert Hoover and the Republican Party diminished Senator Pine’s chances of being reelected, irrespective of how much of his personal fortune he invested into his campaign.  The opportunity for a Democrat to win was widely recognized and the primary attracted five serious candidates, including three former governors.  Thomas P. Gore sought to make yet another comeback.

Despite having earned significant fees for representing oil companies and oil producers, Gore campaigned hard as the friend of the farmer and the candidate who “had a hole in his pocket”.  Gore also shrewdly moved to tie his senatorial campaign to the gubernatorial campaign of William “Alfalfa Bill” Murray, a rising power in Oklahoma politics.

Oklahoma’s politics were as tempestuous as any state in country.  Two governors in the state’s short history had been impeached, including Henry Johnston, whom many legislators believed was unduly influenced by his personal secretary, Mrs. O.O. Hammonds.

William “Alfalfa Bill” Murray turned the already turbulent politics of Oklahoma on its head.  The sixty-year old Murray was a foe of corporations and the friend of the farmer.  Murray had served as Speaker of Oklahoma’s House of Representatives and two terms in Congress.  After suffering successive defeats for Congress and governor, Alfalfa Bill had gone to start an American colony in Bolivia.  The colony failed and Bill Murray returned to Oklahoma in 1929 and was already running for governor in 1930.  Lean and lanky with a drooping moustache, Murray was hardly a picture of sartorial splendor.  His clothes were usually wrinkled and food stained.  During the hot summer months, Alfalfa Bill’s white suits were stained by tobacco juice.

Murray was also a racist, campaigning for governor in 1930 against what he referred to as “the three C’s – – – corporations, carpetbaggers, and coons.”  The former senator aligning his own campaign with that of William Murray was more opportunistic than sharing basic beliefs with Alfalfa Bill, although Gore had once been an equally fierce critic of corporations and big business.  Gore’s blindness never inhibited his ability to campaign, especially to speak.  Out of office for ten years, his former isolationism and skepticism about the World War did not especially hamper his campaign.  With five serious candidates competing in the Democratic primary, the vote was seriously divided and allowed Gore to lead the field, albeit by a scant 161 votes.

The second runner up, C. J. Wrightsman, contested the run off election but never really managed to rally all of the former senator’s political enemies to his banner.  Gore won the Democratic nomination easily, with more than 58% of the vote.

Despite the depression, some believed Senator William B. Pine’s personal wealth might make a difference in the general election and it was generally conceded Pine was the most popular Republican in the state.  Pine campaigned gamely and made a race of it, but ultimately fell short.  T. P. Gore won the Senate race by just over 23,000 votes.  William B. Pine had won nearly 48% of the vote, an impressive tally in a Democratic state during the Great Depression.

Thomas P. Gore had that rarest of opportunities for a politician after having been soundly rejected by the people: a second chance.  Gore decried the suffering of the Great Depression but the hardships and loss of that terrible age was magnified for many Sooners with the arrival of the Dust Bowl, a phenomenon of severe drought and wind erosion that brought “black blizzards” blowing across the country.  Oklahoma’s state government was virtually bankrupt with people unable to pay their bills, much less their taxes.  Many Oklahomans drifted westward with the winds and a great many “Okies” settled in California.

Initially, Senator Gore lent his support to the administration of President Franklin Delano Roosevelt, but it was not long before the Oklahoman began to dissent.  Gore bitterly fought the legislation creating the Works Progress Administration.  Many of his constituents wrote the senator to either urge him to support the WPA or castigate him for his opposition to an agency they firmly believed would provide jobs and income.  Senator Gore wrote disdainfully that the writers were proof of “how the dole spoils the soul.”

“Much as I value votes I am not in the market,” Gore snapped.  “I cannot consent to buy votes with the people’s money.”

Senator Gore piously added, “I owe a debt to the taxpayer as well as to the unemployed.”

According to author James T. Patterson in his book, Congressional Conservatism and the New Deal, only Virginia’s “unreconstructed rebel” Carter Glass excelled T. P. Gore in his opposition to the New Deal.  It was ironic that Senator Gore steadfastly refused to support the huge government expenditures earmarked for relief of citizens when few needed it more than Oklahomans.

As Mr. Patterson notes, Senator Gore explained, “As I see it, credit is to a nation what chastity is to a woman.  Without it, nothing counts.”

Once a populist and a progressive, by his last term in the United States Senate, Gore was considered a conservative, if not a reactionary.  T. P. Gore had also once been the foe of the oil companies, but by the time he returned to the U. S. Senate in 1931, he had become a spokesman for the oil industry.  Like Carter Glass, Gore was especially fiscally conservative.

Suffering Oklahomans had little use for Gore’s lofty speeches praising rugged individualism.  Certainly, having been completely blind since the age of eleven, Thomas Pryor Gore had managed to overcome hardship and disability, but tens of thousands of Oklahomans had to worry about the necessities; having food to eat, shelter, and employment.  Glass represented a different state, less hard hit by the depression and the virtual collapse of the agricultural economy.  Carter Glass also had another distinct advantage in that he was ensconced in the political machine that ruled the Old Dominion State.  Gore had little organization to speak of and all federal patronage in the Sooner State was funneled to the senior senator, Elmer Thomas, who was a stronger backer of the New Deal.

Marland had immediately begun his administration by emulating that of FDR and the Marland version was called the “Little New Deal.” As E. W. Marland came into office some 850,000 Oklahomans were either unemployed or on relief.  Marland was prepared to forfeit two years of his four-year term as governor to run for the United States Senate.

Gore campaigned upon his record, which was perhaps the worst thing he could have done, yet he could not escape it either.  The senator ran a distant fourth in the Democratic primary.  Josh Lee, supported by a cadre of young men known as the “Rover Boys” led in the first primary.  Facing Governor Marland in the run off election, Josh Lee won easily, winning by more than 100,000 votes.

Failing to win 20% of the vote inside the Democratic primary, Senator T. P. Gore finished out his term of office and retired from the U. S. Senate in 1937.  Gore revived his law practice and continued to live in Washington, D. C.

Despite his blindness, Gore was quite well read inasmuch as Mrs. Gore read to him constantly and the former senator owned an impressive library of books.  Gore had a highly retentive mind and was able to parlay his talents into a successful law practice.

After his death, an editorial in the Ada Weekly News summed up T. P. Gore’s oratorical talents.

“Gore was an orator of great power.  We have watched him change the feeling of a crowd from bitterness to friendship.  We have seen him lift friendly crowds to peaks of enthusiasm.”

For the editor of the Ada Weekly News, Thomas P. Gore was a man of conviction, not a politician.

“We doubt if Gore ever voted any way except as his understanding and conscience directed.  He did not fear the ‘wrath of kings’ or the emotion of the voters.  He did not seem to be disappointed in defeat; he was not unduly elated at success.  Getting elected was a stepping-stone to service.  Defeat left him proud of his independence.”

The editor noted he had not always voted for T. P. Gore, but lamented over the years he had concluded he had made a mistake in not supporting the senator.

“It is better to have in office a courageous and intelligent man who disagrees with you now and then than to have a close friend who tries to get on the popular side on all occasions.  Integrity is made of stern stuff.”