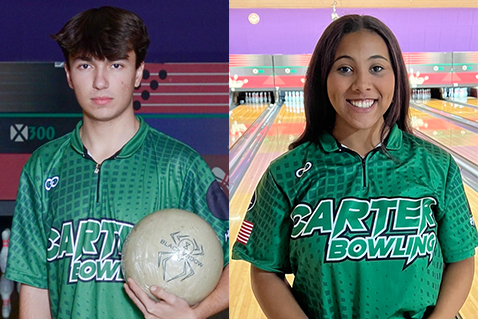 Blake Thornhill and Gracie Miller have been selected the District 3 Bowlers of the Year for 2022.

The All-District 3 teams have also been announced.

Carter, coached by Ray Wynn, swept this season’s District 3 team championships and will compete in the Region 2 tournament after the holidays. The Gibbs girls team and the Karns boys team, which were District 3 runners-up, also will advance to the region tourney at Pigeon Forge.

In a signing ceremony at Knoxville Catholic, three student-athletes signed letters of intent that will chart their academic and athletic careers. They were Blair Cherry (Carson Newman) in volleyball, Trevor Duncan (Tennessee) in football and Brock Taylor (Vanderbilt) in football.

LAMAR BROWN of West has been named the head coach of the 2023 Knox County All-Star football team that will play the East Tennessee All-Stars in the Commercial Bank Rivalry Showcase game, presented by Food City, announced Mark Packer recently on Twitter.

Kingston’s Brian Pankey will be the head coach of the ET All-Stars.

The post-season contest is tied at 1-1 and a site for next year’s game has yet to be named.

CADE BALLARD, former Greeneville High standout, was the quarterback for Army in the Black Knights’ recent overtime win over Navy.

Central brothers Kalib and Liam Fortner were freshmen on the Navy roster this season.