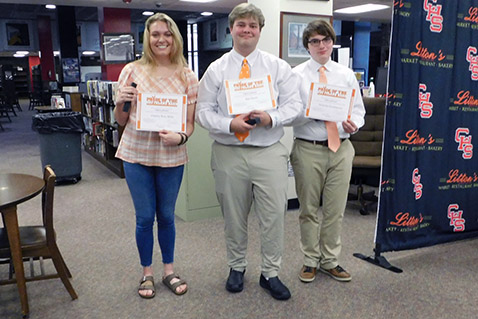 Three Central High School students will continue their academic and musical pursuits at the University of Tennessee.

The trio will play in UT’s Pride of the Southland Band, one of the most renowned collegiate marching bands in the country.

Charley Rose Bible, Jake Ensor and Nicholas Fontanarosa officially became members of the Pride of the Southland Band late Tuesday afternoon at a signing ceremony at the Central High School Library as classmates, friends and family were in attendance.

Bible will continue a family tradition with the Pride of the Southland Band as her grandfather Charles Harrington played in the 1960s and his father, T.R, was in the band during the 1930s.

She’ll play in the drumline and looks forward to continuing to pursue her music at UT.

“Band has taught me to be a leader,” Bible said “And when you’re in the drumline, you’re the backbone of the band.”

Bible, during her time at Central, has served as the band’s front ensemble captain, percussion co-captain and percussion captain.

She’ll graduate in the top 10 percent of her class and she has taught piano lessons.

A volunteer for Zoo Knoxville, Bible will attend the Haslam College of Business and she’ll also continue to study Chinese.

Ensor, who has been at Central for three years after transferring from L&N STEM Academy, began playing alto saxophone in the sixth grade. He’s unsure of a college major but he’s considering minoring in music. He’s a member of the National Honor Society.

He’s anticipating his college years and said that band has been a huge part of his life.

“I’m very excited,” Ensor said. “I’m excited about continuing in music and I’ve been living around UT my whole life.

“I can’t wait to play with musicians of high caliber and I’m looking forward to forging new relationships.”

Fontanarosa, a member of the National Honor Society and a Tri-Star Scholar, began playing trombone in the sixth grade. He switched to tuba as a high school senior.

While he has a love for jazz music and has come to enjoy playing, he admits that band was far from his first love as a middle school student.

“I wasn’t all that into band at first,” he said. “If you would have asked me if I wanted to play in the Pride, I would’ve said ‘no.’

“When I came home from band, I hated it. I told my parents that I wanted to quit. They said I could quit, but they told me that if I didn’t want to be in band, that I needed to find something else to do. They used a little tough love.”

But now, he’s excited to be playing at UT.