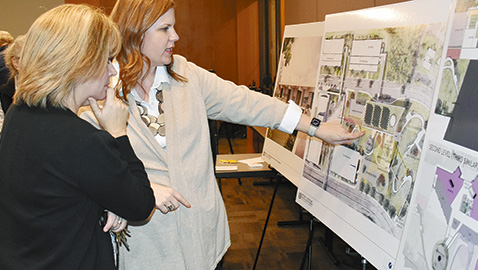 More than forty people ventured out last Thursday night to the City-County Building to watch a presentation about three unique concept plans envisioning what the proposed Knoxville Science Museum might resemble. On Nov. 21, in the small assembly room of the building, BarberMcMurry Architects Executive Vice President and COO Kelly Headden walked the attendees through the details of each design option.

Others presenting at the public meeting were city staff Chief Operating Officer David Brace and Deputy to the Mayor Bill Lyons. Those in attendance besides the public were Jim and Michelle Clayton, Susan Brown, and Keith Green of the Clayton Family Foundation, City Councilmen George Wallace and Andrew Roberto, and other representatives of BarberMcMurry Architects.

“Mr. Clayton, I want to extend the City’s thank you for this incredible opportunity, this gift … it is an incredible treasure for our community, and for letting us support you in this project and walk down this path together,” expressed Brace.

The proposed project, tentatively to be named the Knoxville Science Museum, will receive $100 million for the design and construction and $50 million as an endowment for the operating costs from the Clayton Family Foundation. The project, which was set in motion with the City approximately three years ago, explored several sites to build the state-of-the-art museum. The best site east of downtown, agreed by the City and Mr. Clayton in a signed development agreement, is near the Knoxville Civic Auditorium and Coliseum.

When the question “Why science?” was posed to Clayton, he responded, “My degree was in engineering and our country has always been a leader in technology. I want to show children today the career opportunities for tomorrow, which will keep the U.S. competitive. This project will help that happen and affect the greatest need for the most people.”

Headden explained, to evaluate the project, “We came up with the idea to produce seven full designs. We are going to show you three … all of them are concepts.”

He walked through all three concepts with slide renderings. They are defined by the KPD Safety Building site, marked between Hall of Fame Drive, Historic Preservation Drive, James White Parkway, Hill Avenue, and Howard Baker Jr. Avenue. The site is in close proximity to three city parking garages and it coordinates with the Mary Costa Plaza. Each option included will eventually build on the site of the current KPD building once it moves its headquarters to the Tennova/St. Mary’s site in North Knoxville.

“With the synergistic support from the City leadership, the development of the Knoxville Science Museum has reached an important milestone. The interactive, multi-faceted science center will be an enjoyable educational resource and provide engaging learning experiences for everyone, from young children to seniors,” said philanthropist Jim Clayton.

When asked why BMA was chosen for the project, Clayton Director of Philanthropy Susan Brown commented, “Jim Clayton interviewed several design firms and felt the best match was BMA.”

BMA Communications Manager Heather Beck shared the timeline of the project at BMA stating that every architect in the firm, 28 in all, began working on the seven concept options for the plan in late summer of this year. After the seven designs were completed, a friendly interoffice six-week design competition occurred between five architects for the final three plans, which were those explained by Headden.

Once Headden finished his talk, the three design options were set up at three stations in the room up with design boards, visuals, and the architects who created them to answer any questions.

BMA Architect A.J. Heidel who worked on Concept Option #2 expressed, “It’s an architect’s dream to work on a museum. What I liked most was it’s playful, with no constrictions on material and the ability to use open slate. We all had a set of constraints in a healthy competition.”

BMA Architect Olivia Poston who also worked on this option mentioned, “It was an interesting site … with it spilling out in the city, and for the slope to feed into the energy of the museum.”

Clayton told members of the press the museum would need a two-year timeline and he hoped that construction will begin next spring.