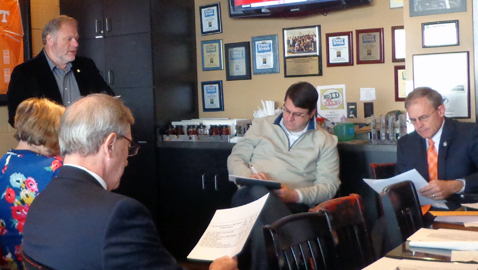 State Representative Smith hosted the meeting and Commissioner Carson Dailey began the discussion by addressing the roadside trash problem that has increased drastically since prisoners are no longer required to help. Dailey and the commission are asking the representatives to change the state law and give local jurisdictions the use of DUI and other offenders by mandating at least 24 hours of community service.

Dailey said that the year before the law changed Knox County had 1,452 offenders doing county labor and now there are only 96. He said that convicted offenders were picking up 118 tons of trash compared to only 30 tons this year. The county’s probation revenue dropped from $67,082 three years ago to $4,435 last year.

Law Director Richard Armstrong said that such legislation should include “mandatory or required” wording and each county could decide what the community service would be.

Commissioner John Schoonmaker spoke for the commission asking that the 1.8% being charged to jurisdictions by the Department of Revenue as a processing fee to return tax money be stopped. He said that the calculation  is now done electronically and local governments need the fund.

He said that Knox County’s share of that would be $525,000 and Knoxville could get $1.7 million. He added that “momentum is moving” to get the funds back and he has seen support in 31 counties and 28 mayors including Knoxville Mayor Madeline Rogero.

Finance Director Chris Caldwell said that his office has hired a consultant to keep track of the tax money refunded to the county and lots of errors have been found in state calculations.

Commission Chairman Randy Smith told the lawmakers, “You’ve cut out the Hall Tax and expect us to get by without it.”

Lt. Governor Randy McNally said the revenue processing fee is “something worthy to be addressed.”

Chairman Smith also spoke to the legislators about the obscure “Urban Growth Plan” and asked why the county still has to abide by it. MPC Chair Longmire said that if the plan isn’t followed it could affect state funding.

Rep. Smith said a meeting on the Urban Growth Plan should be held soon and Armstrong asked if there is still a need for the plan considering the current law forbids annexation by cities.

McNally addressed the group briefly about the push to release ACT scores for Bearden High test-takers and told them that UT and other colleges have agreed to accept the questionable scores.

Rep. Brooks spoke about Lenoir City Utility Board utilities being the only utility district in the state not to share its in lieu of tax money. He said that more than 60% of LCUB customers live in Knox County and said that LCUB is one of the largest utilities in the state. He said he plans to ask the county, Knoxville and Lenoir City to pass a resolution to request the funds.

Commissioner Dave Wright wants to sponsor such a resolution and said, “We need to act this month.” The resolutions would then go to the state legislature for action.

Rep. Smith said there are 34,000 children in Tennessee with drug problems and said Recovery High Schools are needed. He said that Knox County has some excess property that might be used and the students who volunteer to attend could receive a diploma from their original high school so it would not hurt their future employment.

Rep. Dunn mentioned the commission’s concerns with the planning commission and the idea of having county appointees only vote on county matters. Longmire countered by saying that Knoxville City residents are also county residents.

Dunn then said he’s concerned with the MPC requiring sidewalks in the county without commission approval.