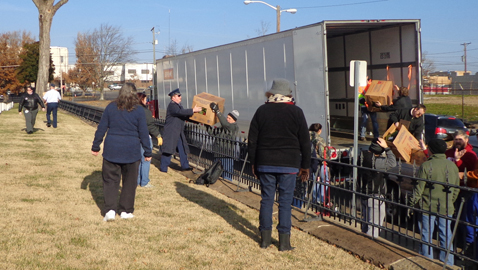 Wreaths Across America came again to Knox County recently, decorating the graves of veterans of our peacetime and wartime soldiers and sailors. The annual event, sponsored for the last time by Knox County Mayor Tim Burchett, will in the future be in the capable hands of the Vietnam Veterans of America’s Captain Bill Robinson Chapter 1078.

One grave got special attention at the request of The Knoxville Focus.

The first grave in the National Cemetery, the one closest to downtown and within the plot that holds East Tennessee Union Volunteers, is that of Brig. General Joseph A. Cooper. He holds a unique place in the history of our region and our state.

Joseph Cooper was a private during the Mexican-American War and returned to his Powell Valley home after that conflict. After East Tennessee voted not to secede from the Union and most of the rest of the state voted to join the Confederacy, Cooper rallied his Campbell County men. They trained in the meadows secretly and one day snuck through Confederate pickets atop Pine Mountain to join the Union Army just across the line in Kentucky.

Cooper served throughout the war and commanded the Tennessee Militia after the Civil War to combat the KKK. Cooper moved to Missouri and, after his death, his body was moved to the Knoxville cemetery where he was buried among his fellow East Tennessee Union Soldiers.

At the National Cemetery dozens of volunteers arrived long before the truck arrived with the boxed wreathes. They then worked to unload the wreaths and place boxes here and there around the graveyard but waiting until after the noon ceremony to place the wreaths.

The ceremony at the National Cemetery, which was started by Union General Ambrose Burnside, was repeated at the East Tennessee State Veterans Cemeteries on Lyons View Pike and Governor John Sevier Highway.

More than 18,000 veterans were decorated with the wreaths, in memory of those veterans and their family’s service to our nation.