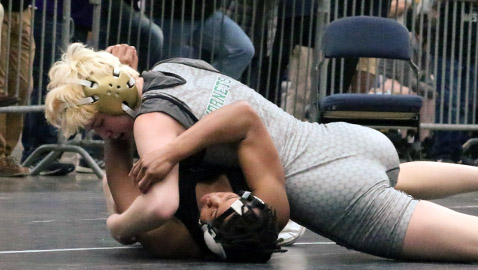 Jailynn Tindall’s move from Georgia to Strawberry Plains last summer has proved to be just peachy for Carter High School.

“As far as I know, she is Carter’s first state champion in wrestling,” said Coach Tim Free.

According to TSSAA’s state championship history, Carter has had 21 appearances in state wrestling events, but never a champion … until now!

“When she came off the mat, she said she couldn’t believe it,” recalled Coach Free. “She was very, very happy. She was in tears and I was too.”

Jailynn then gave her coach a big hug.

“I think she did a great job,” said Free. “She listened very well and executed.

Tindall came into the tournament seeded No. 2 in her weight class.

In her opening match, she pinned her opponent in 3:47 and followed that with a 10-1 major decision win.

Her opponent in the finals was the top seed.

The three wins at the state boosted Jailynn’s season record to 23-1 in sanctioned matches. Her only loss came against a Riverdale wrestler in a tournament at Stone Memorial during the regular season.

Hardin Valley Academy freshman Ella Murhpey gave Knox County its only other state title in the three-day event when she recorded three straight pins in the 190-pound class.

Farragut sophomore Hailey Webb (160 pounds) also was a state runner-up – one of six in all that Knox County had. Webb advanced with a two-minute pin and a 26-9 technical fall before being pinned in the finals.

Coach Tim Pittman’s Gibbs boys team had a good overall showing, with five of its wrestlers placing in Class A-AA.

Porter Finstad (29-3) claimed second place in the 106-pound weight class The junior advanced with a pin, 16-0 technical fall and 7-4 decision to reach the finals, where he was pinned by Signal Mountain’s Ethan Uhorchuk in 1:34.

Freshman Spencer Reep (120 pounds) took second place, reaching the finals with a 11-1 MD and a pair of decisions before losing a 12-4 MD to Pigeon Forge’s Andy Cable. Reep posted a 26-5 record this season.

Senior John Pittman placed third at 145. He started fast with a pin in 16 seconds. After losing 6-3, he went on a run in the consolation bracket, winning his next four matches to improve his record to 32-6.

Gibbs junior Carson Reep (160) also took third place. He had an 11-2 MD and 4-0 decision before bowing 12-4 in the semifinals. In the consolation bracket, Reep had a pin in 1:47 and defeated Hixson senior Kobie Smith 8-7.

The Eagles’ Kirk Parsons had four pins in his bracket and ended with fourth place when he lost 4-0 in the consolation finals of the 182-pound class. The Gibbs senior is 29-5.

Baylor racked up 216.5 points in the team scoring.

Halls senior Jeremy Peters (120 pounds) reached and won in the blood round to place sixth.

Jonathan Kiser (138 pounds) also had a sixth place showing for the Red Devils.