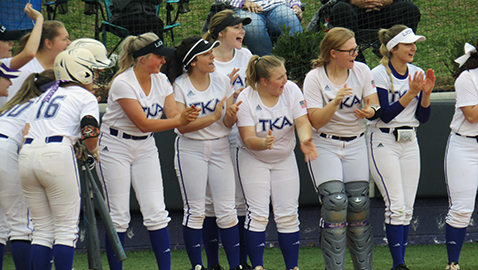 With stormy weather in the forecast, TKA Coach Mark Weekly first moved up the starting time of the game one hour to 5 p.m.

Then the Lady Lions used their speed in the bottom of the fifth inning to score a run and break a 6-6 tie just before the rainy and windy conditions arrived, causing umpires to clear the field at 6:45.

Approximately 10 minutes later, with the weather radar not looking favorable, the game was called and head coaches shook hands. By rule, it was an official game.

It was a matchup of two state powers from different classifications. The King’s Academy had captured the Division II-A state championship last year, while tradition-rich Gibbs had won the Division I Class AAA crown before being reclassified Class AA this season.

TKA, which has seven players on track to play at the collegiate level, improved to 17-2 with the win. Gibbs slipped to 11-4. It was the only scheduled game between the two teams this season.

The two fastest Lady Lions produced the winning run. With two outs, Teygan Bouknight got aboard on an infield single and stole second base. Katelyn Norris tripled to left center to bring in Bouknight just before Mother Nature made her presence felt.

Gibbs had made things very interesting in the top of the fifth, erupting for six runs after two outs to tie the game. A grand slam to center by sophomore Macey Hughes cut the deficit to one and Olivia Wheeler followed with a solo shot down the left field line to pull the Lady Eagles even.

Gibbs wasn’t done and almost took the lead. Kaley Kern singled to right and Kaleigh Caldwell singled into the left center field gap to put runners on first and third. A ground out to shortstop finally ended the explosion.

“I think we came out a little afraid and I don’t know why, but a little scared or flat,” said Gibbs Coach Carol Mitchell. “We finally got into stride. I think our nerves maybe settled down. I don’t know what was wrong with us at the beginning of the game.

“They’ve got a great team. Anytime you can go out and get good players like that, they’re going to have a great team. He’s got a bunch of kids who are going to Division 1 and he’s done a good job of taking those kids and putting them on the field. So hats off to him.”

Prior to the late Gibbs uprising, winning pitcher Kaylan Cole had given up only three singles and struck out four with no walks.

Cole also fanned the first two batters she faced in the fifth, but then gave up a base on balls to Josie Huff and Megan Turner worked her for a walk. Gibbs leadoff batter Sierra Hucklebee followed with a RBI single up the middle and an infield single by Shelby Blake loaded the bases for Hughes.

Gibbs pitcher Rayna Pendleton survived a rocky first inning. After Cole led off with a homer, Pendleton hit three TKA batters with a pitch to load the bases but got out of the jam with an infield-rule fly out and a fly out to left.

Reagan Weekly’s RBI double in the second inning and Madison Webber’s homer in the third made it 3-0.

Gibbs finally threatened in the fourth when Blake and Hughes singled to put runners on first and third. But second baseman Weekly raced back into shallow right field to make a great catch and end the threat.

The King’s Academy showed its speed in the bottom of the fourth as Bouknight beat out an infield hit and Norris beat out a bunt. An appeal of a ruling reversed an out call and loaded the bases.

A diving catch and throw to second base by Kern, the right fielder, produced a double play and the Lady Eagles almost escaped unscathed, but Webber launched a three-run homer to center – her second HR of the game – to make it 6-0.

“It’s one of those that I would put an asterisk beside because I wasn’t really thrilled about how many batters we left on base,” he said.

“I thought we had a great outing from our No. 8 and 9 hitters. They set the table for our studs at the top of the lineup.

“Anytime you can play a team like Gibbs and come out on top, it’s a good thing.”

At this point in the season, Coach Mitchell is expecting more from her team.

“We’ve been challenged, but we’ve not stepped up to take the challenge,” she said. “We’ve got to get a lot tougher mentally when we play better teams.”