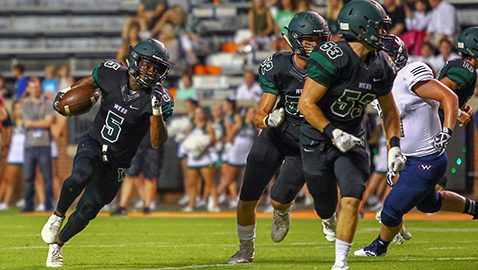 Les Greer makes it no secret that his expectation is to win a Division II-A State Championship. And he’s coached championship teams before.

He may just have a title contender at The King’s Academy if Friday night’s small sample size is any indication.

Greer, who was tapped to take over as the Lions coach last spring after Matt Lowe returned to Powell High School, saw his squad notch a 22-7 victory over Karns Friday night at the KOC High School Kick-Off Classic at Neyland Stadium.

“I thought we played pretty well,” said Greer, who was the defensive coordinator for Catholic High School’s Class 5A State Championship team in 2017. “We don’t have a lot of depth but I was able to get some twos and threes in there tonight.”

The Lions, who went 8-4 under Lowe last season, torched the Beavers’ defense early as senior quarterback Drew Blair (a transfer from William Blount) threw a 64-yard touchdown pass to Tyler Mink and Nakelin McAfee scored on a 3-yard plunge.

TKA also got a 45-yard scoring pass from backup quarterback Nathan Hoffman to Evan Whaley for its final score of the 12-minute quarter.

Blair went 6-for-8 and amassed 105 yards against Karns, which didn’t have any answers on defense on this night on Rocky Top.

The Beavers got their lone score of the game when quarterback Daniel Kitts connected with Thomas Harper, an Oklahoma State commitment, on a 28-yard scoring strike.

Harper finished the abbreviated contest with six receptions for 53 yards.

In other games from the jamboree, which was at the University of Tennessee for the first time in five years:

Powell 21, Carter 0: Lowe was victorious in his return to the Panthers as Powell’s defense had three interceptions against the Hornets, who had a new coach of their own in Vic Wharton.

Daniel Stanford, Tyler Kirkess and Evan England all had interceptions for Powell, which also held Carter on downs before scoring when Michael Culpepper caught a 61-yard touchdown pass from senior Walker Trusley.

Deuce Shreve also threw a pair of touchdown tosses for the Panthers. He had a 26-yard scoring strike to Riley Bryant and a 19-yarder to Bailor Walker.

Bearden 7, Austin-East 0: The Bulldogs got a little defensive against the Roadrunners in a showdown that featured a pair of 2017 playoff teams. Bearden got the lone score of the game when Andrew Kregel recovered a fumble and rumbled 36 yards into the end zone with 1 minute, 5 seconds remaining.

Bulldogs coach Morgan Shinlever said that he was pleased but quickly turned the page to this week’s showdown against West High.

“We’ve been getting ready for West and I think that showed tonight,” Shinlever said. “It’s hard to get the kids excited when you’re playing against a team that they haven’t worked on. The exciting thing was getting to play at Neyland Stadium.

In addition to picking up the defensive touchdown, Bearden defensive back Kahlil Abdullah deflected a pair of passes to keep the Roadrunners off the scoreboard.

Hardin Valley Academy 7, South-Doyle 0: HVA’s Jacob Smith threw a 5-yard touchdown pass to Hunter Doefler for the only points of the game. Smith is the backup quarterback for the Hawks.

Senior starter Grayson Vaughn went 5-for-7 in the game before giving way to Smith on Hardin Valley’s second possession against the Cherokees.

Farragut 10, Gibbs 0: Gabe Hensley touched the ball three times and rushed for 39 yards for the Admirals. His 12-yard scamper represented the only touchdown of the game against the Eagles.

“He got his chance tonight,” Farragut coach Eddie Courtney said of Hensley. “We have 83 players who travel and we were able to give them all a chance to play. I’m really proud of those guys.

“We told them to think about it like they were playing in their back yard. This was like playing Saturday afternoon wearing orange.”

Fulton 14, Halls 0: Deshawn Page and J’Coryan Anderson each had scoring runs for the Falcons, who open their season against Central in Fountain City on Thursday, Aug. 23.

The Bobcats will be banged up against the Vikings. Devone Moss missed Friday’s activities and Xavier Washington was injured against the Cougars.

Webb School of Knoxville 14, West 0: Jahlil Jefferson scored twice for the Spartans against the Rebels. He had touchdown runs of 34 and 25 yards respectively. Webb plays Evangelical Christian School at Vanderbilt Friday night.