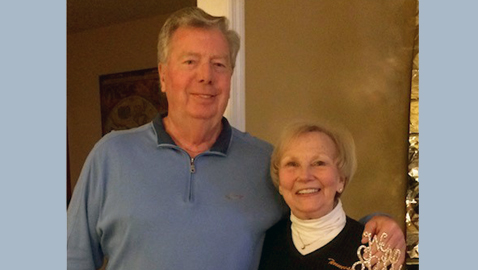 Bob and Sue Tobey celebrated their 50th Anniversary at a surprise party hosted by neighbors and friends earlier this month.

The Tobeys were high school friends in Detroit, Michigan and began dating when reunited after college.  As Bob said, “And here we are now.”

The couple has two sons and two grandchildren. Mike Tobey and his wife Geneen live in Colorado with their children Allison and Matt. Rob Tobey lives in Houston and arranged a surprise visit to join in the celebration.

Bob served in the Vietnam War as a Marine Corp Sergeant. The couple have lived in Powell since 1995.

Bob retired from Roadway Trucking and now works at Target in stocking. Sue has a long history of working with children and is currently a Special Education Teaching Assistant for Knox County Schools at Powell Elementary.

The anniversary celebration was also attended by several college and young adult-aged children of the neighborhood. The Tobeys have not only watched these children grow up, but have continued to befriend and mentor them. Through the years they have coached neighborhood children’s soccer teams, attended sporting events and recitals, adopted grandchildren on school grandparents days, rewarded good report cards and opened their beautifully landscaped yard for prom pictures, even sending one couple off to prom in Bob’s Cadillac. They are avid readers of community newspapers and when a neighborhood child is recognized in print, they place the clipping along with notes of congratulations and encouragement in their mailboxes.

When asked the secret of a long, happy marriage, Bob answered, “We don’t fight. There have been walk-away moments through the years, but to say things in anger that you will regret but can’t take back…” He shook his head, “We just never do it.”