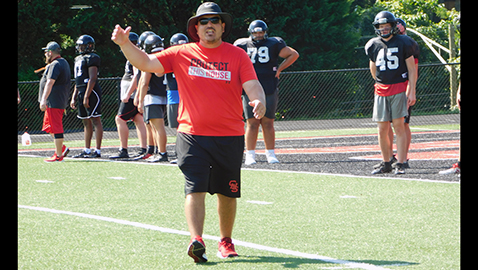 Six years ago, Nick Craney was a budding defensive coach on Bryson Rosser’s first Central team and former McMinn County High quarterback Nathan Simbeck was assisting the Bobcats as a volunteer coach while finishing his undergraduate studies at UT.

Simbeck was only at Central that 2014 season, returning home to coach quarterbacks at his alma mater. But he made an impression on Craney that lasted.

Today, Craney is the new head coach at CHS, which has won back-to-back Class 5A state championships, and Simbeck is his offensive coordinator.

“I knew after that first year, if I ever became the head coach, he was going to be one of the first calls I would make to try and get him on board,” said Craney last week after a morning practice session.

The two think alike when it comes to offense, Craney pointed out, and Simbeck also has seen firsthand how the Central program puts an emphasis on growing young men.

“I knew all of those things were in alignment and I knew he was somebody I wanted to go after,” said Craney. “When I got the head job, it worked out perfectly that he could come here and be the OC.”

Craney said he will remain defensive coordinator on the staff, plus he has someone he feels comfortable with on the offensive side of the ball, which was Rosser’s forte.

Simbeck looked impressive during the July 27 practice, communicating with the players and appearing to have a good grasp of the offense.

A couple of times in June, to fulfill social distancing requirements in the pandemic, the Central staff rolled a 55-inch TV screen under the stadium, where the offensive players could watch film and clips of the playbook on Huddle.

Craney said this season’s offense will operate more with two backs and three receivers, compared to last year’s one back and four receivers.

“The other big difference is the quarterback is making reads and decisions a lot more in this offense and making plays with his legs,” added Craney.

“There are a lot of similarities in what plays we’ll be calling, but the approach to it and system is a little different.”

Late in the practice session, something triggered Simbeck to abruptly get the Bobcats’ attention with a pep talk.

“You all are two-time state champions,” he told the players. “That’s not good enough. We’ve got to raise the bar again.”

The 6-foot-4 Simbeck also played basketball at McMinn County and graduated in 2012.

The following fall Simbeck was involved in a tragic car accident but made a miraculous recovery, which included 26 days in ICU and Molly Martin, his girl friend at the time, by his side.

After the 2015 season, Simbeck coached receivers at Anderson University in Indiana. He returned to Athens once again and was defensive backs coach for two seasons.

In 2019 Simbeck became McMinn County’s offensive coordinator and was named the Region 2-6A Assistant Coach of the Year.

Nathan and Molly are now married and were expecting their first child this month.

“He will have a lot of changes going on, changing schools and with a baby on the way. But his work ethic will take care of that,” Cagle told Scott Power of the Daily Post Athenian.com after Central hired Simbeck in May.

“He has a great rapport with the players and he’s just a good, knowledgeable coach and I’m sure he will build on that. It’s hard to lose good coaches.”