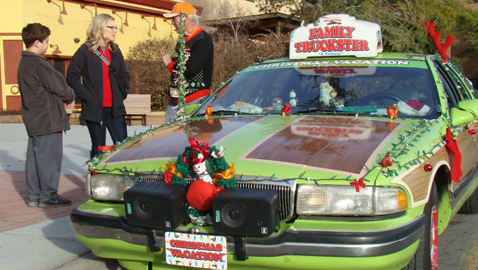 In its fourth year on the roads of Knoxville and East Tennessee, the Family Truckster is looking better than ever.

Owner Dave Moore has given her a bright, fresh pea-green paint job, the same color she donned when the Christmas Vacation movie, starring Chevy Chase, came out in 1989.

But it’s not the original color on the Truckster that excites Moore the most this year. It’s the tribute to special people Moore is starting with the Truckster.

It starts with Virginia and Emmett Moore, Dave’s parents.

“Mom just had her seventh heavenly birthday,” said Dave. “It’ll be two years this coming April when Dad passed away. He was a Marine and World War II veteran and received the Purple Heart.”

The other four Moore is honoring include Zaevion Dobson, a 15-year-old Fulton High sophomore student-athlete who was senselessly killed just about this time last year as he shielded two girls from gang gunfire.

Moore also is paying tribute to this reporter’s father, Bob Williams of Clinton, who enjoyed a ride in the Family Truckster during the holidays last year. He passed away March 5 at age 87.

“I immediately knew how much he cared about his family, his community and his Vols,” said Moore. “He touched my heart and reminded me so much of my father.”

Lady Vol coaching legend Pat Summitt, who died last summer after a battle with Alzheimer’s, is being honored not just for her outstanding coaching career and contributions to women’s basketball, but also because she cared about others, especially the fans.

“I still remember the time she dressed up like a cheerleader and sang Rocky Top with Bruce Pearl for the fans at a game,” said Moore.

The sixth tribute goes to one of our country’s most popular presidents and what he stood for – John F. Kennedy.

“I like to break that down to ask what you can do for your community.”

The “Tribute Truckster,” as Moore now calls it, also is decorated with a cardinal and a ribbon the favorite color of each honoree wrapped around the cardinal with a bow on top.

Names of each honoree also will be listed on the Tribute Truckster’s window.

“Tribute Truckster doubles as a tribute to individuals who ‘caretributed’ to making our ‘caremunities’ and our world a better place because they cared,” said Moore.

The Truckster received overall first place awards in three Christmas parades this year at Wartburg, Maryville and Oak Ridge. It also has been a big part of two Christmas Vacation movie theme parties.

“The popularity of the Family Truckster has grown a lot in the last year or two,” said Moore.

Moore offers free rides in the Truckster to kids and kids at heart. Just call 865-966-CARE.