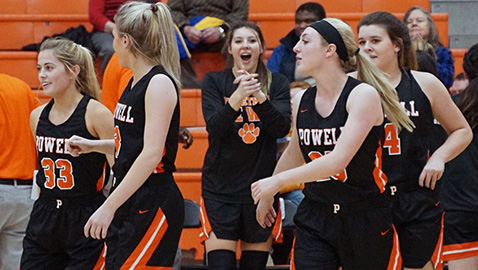 What goes into the making of a great high school basketball outside shooter?

There’s a lot more to it than Bailey Trumm just pulling the trigger.

First off, it takes a lot of time from a lot of folks.

“It’s a really great accomplishment,” said the Powell High standout when asked what the TSSAA’s career 3-point record meant to her after tying it at Oak Ridge on Jan. 28. “I couldn’t have done it without amazing teammates and coaches.”

A week later, on Feb. 4, in another District 3-AAA game at Clinton, it took Trumm only one shot to gain sole possession of the record. She drilled a 3-point shot just to the left of the top of the key and about three feet behind the 3-point line.

Just like that, Trumm had moved ahead of Kendall Spray of Mt. Juliet as Tennessee’s all-time leader in 3-point shots. Spray, who made 390 at Wilson Central High (2012-16), is now a redshirt junior standout at Clemson University.

Bailey hopes to separate herself even more from others in the remaining games of her prep career. She got off to a great start in the 73-58 win over Clinton as she made a school record tying eight 3-point baskets and scored 37 points. That put her at 398 in her career.

With Powell scheduled to play at Karns Friday night, Trumm was expected to hit the No. 400 milestone. Maybe they’ll put that basketball in the PHS trophy case with Bailey’s name under it and her picture beside it.

What has made Bailey Trumm such a good outside shooter?

“Just countless hours in the gym with my family, my sister (Reagan) and my mom (Jennifer) and dad (Will),” answered Bailey. “We go to the gym literally every day. We spend a lot of hours there. You can’t really be good, if you don’t put in the time and effort to do so.

“And my shooting coach, Tim Sullivan,” added Bailey. “I wouldn’t be as good a shooter at all if not for him. He is the key to my success for most of it.

“He used to be a NBA shot coach. He lives in New York and I Skype him.

“He has made like 273 3s in a row. It’s crazy. He just knows what he’s talking about. I give credit to him, because without him, I wouldn’t be as good of a shooter as I am today.”

With Skype, “I can video tape myself and then (he) sends it back to me with a recording on it of what I’m doing (right or wrong).”

Trumm said Sullivan has been coaching her since her freshman year at Carter, where she started her prep career.

Bailey’s parents, of course, have been assisting her in person.

“They take me to the gym. They rebound for me. My dad comes up with lots of drills. He’s pretty much my main coach, my main trainer. He has put in a lot of time to help me and my sister become the players we are today.”

Bailey transferred to Powell her junior year and Reagan joined her there as a freshman.

Bailey has signed with Appalachian State University in Boone, N.C. Reagan, a sophomore who also is a great shooter from 3-point range, hasn’t committed yet.

“I’m hoping she’ll come to Appy State with me,” said Bailey, “but she’ll have a lot of other opportunities she’ll have to look at.”

Bailey made 182 3-pointers as a freshman and sophomore at Carter, according to Powell Coach John Fisher, and had 216 at Powell going into the Karns game

Not only does Trumm now own the career record in the state, but her accuracy from 3-point land also is impressive. After the Clinton game, she had made 113 of her 255 attempts this season (44.3 percent).

The Trumm sisters and the Lady Panthers are scheduled to host Union County Tuesday night.

The Halls at Powell game that was postponed last Thursday when Knox County closed schools because of flooding conditions has been rescheduled for this Thursday and it will be Senior Night.

THREE-POINT DISTANCE: In high school, the 3-point line is 19 feet, 9 inches from the basket for boys and girls, but Bailey Trumm, during her state record pursuit, was noticed to make many of her 3-point baskets from two to three feet behind the arc or more.

The NBA distance for the 3-point shot is 22 feet in the corners and 23 feet, 9 inches from the top of the key.