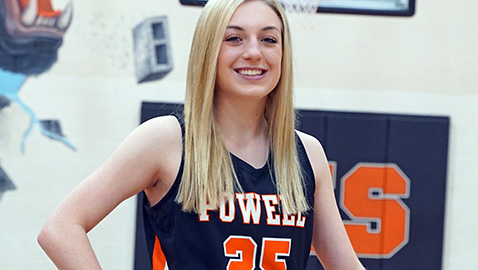 Bailey Trumm made news on the state scene this past winter as she became the all-time leader in making 3-point shots in TSSAA girls basketball.

The 5-7 Powell guard is now in the state record book with 416 treys, moving past Wilson Central product Kendall Spray, who totaled 390 from 2012 through 2016.

Trumm, the PHS female Student-Athlete of the Year, will be continuing her education and basketball career at Appalachian State University.

Walker Trusley is Powell’s male honoree. The two-sport standout, who signed a baseball scholarship with East Tennessee State University, led the Panthers to a 10-0 regular season in football and had a record-setting year himself at quarterback.

“What a great honor for Bailey Trumm,” said Powell girls basketball coach John Fisher of the student-athlete award. “Bailey is so deserving and displays the type of work ethic that a coach desires in their players.

“For all of her athletic accomplishments, which have been well documented, she was also ranked No. 5 academically at PHS with a 4.3 GPA.

“I totally admire the job that Jennifer and Will have done raising an incredible daughter. I will miss her but look forward to seeing all the great things Bailey is going to do as an alumnus of Powell High.”

Bailey also was a finalist for Class AAA Miss Basketball in Tennessee.

Trusley threw for 2,342 yards and 27 touchdowns – both single season school records – as Powell reached the Class 5A state quarterfinals. In addition, he racked up 2,945 total yards and 35 touchdowns in helping lead Coach Matt Lowe’s Panthers to the Region 3-5A title.

Trusley’s senior year of baseball was cut short due to the coronavirus pandemic.

“Walker is a tremendous young man that has contributed in many ways to the successes of both Powell baseball and Powell football,” said Josh Warner, who was in his first season as Powell’s head baseball coach this spring.

“Walker has an extremely bright future ahead of him playing baseball for ETSU and I could not be more proud of Walker for all of the hard work and commitment he has displayed and that ultimately led to his success in the classroom and on the field.”

Trusley could see playing time with the Buccaneers as a pitcher, shortstop or third baseman, because he’s such a good contact hitter at the plate.