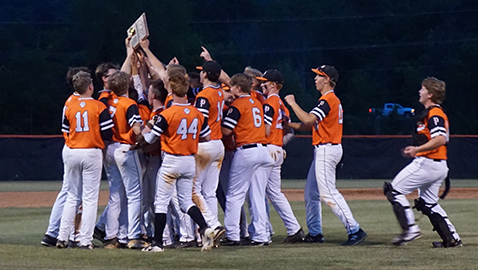 Powell High’s baseball team captured the District 3-AAA championship and avoided a must-win matchup with mighty Farragut, but what junior Walker Trusley was most happy about was getting to play another home game with his senior teammates.

“It’s more of I love these seniors and I have a great relationship with them, and it’s another game we get to play on this field with them, rather than ‘Oh crap, we have to go play Farragut at Farragut,” said Trusley after the Panthers posted a 5-4 win over rival Halls at Danny T. Maples Field Wednesday night.

The two winners will meet for the region championship Wednesday.

Trusley, Powell’s starting pitcher, was staked to a 4-0 lead in the first inning against the Red Devils, but he felt his control issues in the middle frames allowed Halls to even the score. Relieved by Matt Grim after the seventh, Trusley got redemption with his bat when he singled in the winning run with two outs in the bottom of the eighth.

“We knew coming in it was going to be a hard-fought game,” said Logan Dalton, Powell’s second-year head coach. “Most of the games with Halls are.

“The fight in these guys is what’s special. We’ve come back from being down three times in this tournament. They don’t quit. This is a special group. It really is.”

The Panthers’ eighth inning offense was efficient and classic. Cameron Bryson, eighth in the batting order, led off with a single through the right side of the infield. Taylor Alford put down a perfect sacrifice bunt to put Bryson on second. Halls intentionally walked leadoff batter Shade Powell. Trusley’s drive into left center got down just soon enough and Bryson beat the tag at the plate.

Run-scoring singles by Ty Hutchinson and Blake Rauhuff pulled the Red Devils within 4-2 in the fourth. In between a hit batsman and a base on balls given up by Trusley, Hunter Housewright doubled with one out in the fifth. Another walk loaded the bases. Graham Elkins’ misplayed grounder to short brought in Will Shoaf from third and Housewright scored on a wild pitch to tie the game.

Grim got a fly out to center and two strikeouts in the eighth to record the mound win. Elkins pitched through six innings for Halls. Hutchinson took the loss in relief.

“We’re ready to play anybody that’s put up against us,” said Coach Dalton. “Obviously, Farragut is a good baseball team. We’ve played them twice this year. One was a really close game (6-5 loss) and the other one was a tournament game (11-1 loss) that we just didn’t have a lot of focus in.

“But the biggest thing about this Halls game is getting another home game. You see the crowd turnout here tonight. Our community is special and they really back our guys. We get to decide our fate on our home field, which is really what you want to do.

“These extra inning games, especially in district championships, take it out of you a little bit,” summed up Dalton with a sigh of relief. “But I’m proud of our guys. They competed really hard and they deserve this.”

Veteran Halls Coach Doug Polston said: “We battled. We got down early and it would have been real easy to have quit, but we didn’t.

“You’ve got to tip your hat to them (Powell). They made the plays they had to make and got the hits when they had to get them.

“I’m proud of my kids,” added Polston, who is in his 31st season. “They fought and scratched. They’ve come a long way. I told them they have nothing to hang their heads about.”