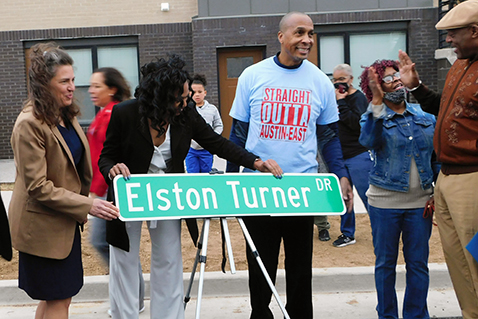 Basketball great Elston Turner was touched by the turnout for a street named in his honor by the City of Knoxville last week. Even a quiver could be detected in his opening comments.

“Every time I come home I feel the love,” he would later say on his special day.

The 6-foot-5 Turner with his bass voice proved to be an outstanding speaker and soon had those in the crowd laughing often.

Many from Austin-East High’s Class of 1977 came to say “thank you” to Turner, not just for leading the Roadrunners to Knoxville’s first state championship in the TSSAA classification era, but also for giving back to his school and community over the years.

Turner went on to star at Ole Miss in the SEC and played a total of eight seasons in the NBA with the Dallas Mavericks, Denver Nuggets and Chicago Bulls. He’s in his 24th season as an NBA assistant coach and this year with the Minnesota Timberwolves.

Elston said the event was “very, very special” to him. “Without the event, just to see everybody gather in February outside on my behalf – that’s special to me right there.

“But the street naming is just unexpected and I’m blessed just to be able to see it, because it’s usually an honor that’s given with someone that’s passed away.”

Elston Turner Drive is now the name of the street that connects South Bell Street to Harriet Tubman Street in the new Austin Homes area.

“I just hope maybe some young people riding up and down the street see it and then realize how important it is to start giving back to the community,” added Turner.

That’s something Elston has been doing with his summer youth basketball camp for close to 40 years. And it was brought to the attention of City Council’s Gwen McKenzie by Sanford Miller, a best friend of Turner’s growing up and a teammate of his in 1977.

“I especially want to thank Rev. Sanford Miller, who came to me and said, ‘Hey, we need to do this.’ And he actually put forth all the effort to do the leg work,” said McKenzie.

Turner said he gives “a nickel or two here or there,” but his investment in the community is mostly his time. There have only been three or four years when he was unable to come back.

“I come back and make myself available for the kids and for friends and family,” he said. “That’s one thing that I’m kind of proud of.”

He’s also worked some camps with back spasms or a hernia. “I just wasn’t going to say no. So I was out there, giving my time. That’s important to me.”

Turner partnered with Emerald Youth Foundation and the Pro Help Summer Basketball Camp staff in 2016 and expressed his appreciation for their assistance.

Later in his talk, Turner said: “I’m blessed to have all you guys as well as others in my life – good friends and family around me. I wouldn’t be standing here without you. So I would like to reflect the spotlight a little bit and say thank you.

“First of all, giving the honor to God,” he said. “He took a little boy, born in Lonsdale, raised in the east side, took me all around this country, all around the world and brought me right back here to witness a day like this … I get a chance to witness it, so it’s very special.”

He then thanked his parents for teaching him the value of hard work, his wife Louise for sticking by his side, and all those in his family, some who flew in from southern California.

He also thanked all of his old coaches that laid the foundation for him to learn how to compete and the friends and classmates he had all the way from Mountain View to Green School to Vine Junior to Austin-East.

And yes, even that famous A-E chant – Who Dat? – that became popular at the state tourney at MTSU in 1977, was heard often.

“I just appreciate you giving me some unforgettable memories,” said Turner.