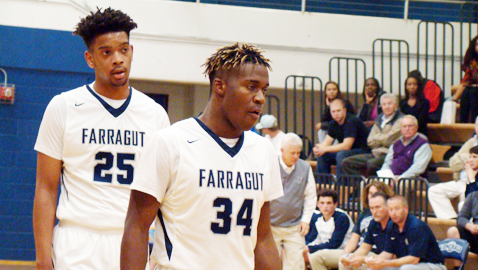 Trouble is: his team hasn’t quite bought over the first three games of the new campaign.

“We have to learn to be more patient,” Cool said after his squad dropped a 74-55 decision to a talented Harriman team Tuesday night at Farragut’s Lynn E. Sexton Gymnasium. “These kids are used to playing AAU and they want to run up and down the court and when you do that, three things can happen.

“You have to play more defense. You can turn the ball over or you can get in foul trouble. And tonight, all three of those happened to us.”

Those three ingredients all led to a recipe for disaster for the Admirals, who dropped to 1-2. Farragut has now lost two consecutive games after opening the season with a win against the Scott Highlanders on Nov. 15.

The Admirals got in to the aforementioned foul trouble when Ethan Sherrill was whistled for a charge early in the second quarter. That was his third foul and it sent him to Farragut bench for the remainder of the first half.

Further complicating things for Farragut was the fact that it committed 18 turnovers before halftime.

“We had 18 turnovers before halftime and we quit counting them after halftime,” Cool said. “I bet they got 30 points off those turnovers and after we didn’t get back on defense after we scored a basket.

The miscues continued to mount after the break and the Blue Devils (2-2) continued to turn Farragut’s mistakes into points.

“The turnovers killed us,” said Admirals senior guard Nick Rogers, who scored a game-high 30 points for Farragut, which fell behind 10-4 early and never really recovered from Harriman’s early punch. “[And] we just didn’t get back on defense.”

Rogers, the defending District 4-AAA Player of the Year, had 13 of his points before halftime. But he was one of three players to find the scoring column over the first 16 minutes.

Caleb Thompson scored four points over that stretch and Elijah Thomas’s second-quarter provided the rest of the home team’s offense and Farragut was in a 34-18 hole at the half.

Conversely, the Blue Devils boasted a potent and balanced offensive attack throughout the game. Harriman had three players with eight points by halftime. Jerome Copeland, Joe Pace and Isaiah McClain shared high-scoring honors for the visitors at the intermission.

McClain also drew the assignment of guarding Rogers; a tall order for any defender.

“[Rogers] is a great player. He’s a phenomenal player,” Harriman coach Shay Shannon said. “He got his points but Isaiah McClain really made him work for everything he got.

“Isaiah did a great job. Our defense was great, especially in the first half. We want to play defense and we want to run and we were able to do that tonight.”

Rogers, meanwhile, got some help from his teammates in the second half as Shawn McKay had five points (all after the break) and Sherrill had 13 points after halftime.

Farragut won’t play again until Tuesday. Then, the Admirals will host William Blount to open their district campaign. The Admirals will then invade rival Bearden on Friday.

“I just hope we can learn from this,” Cool said. “Right now, our record doesn’t count.

“I mean, it counts, but everything really counts on Tuesday and William Blount is good. They’re 5-1 and they beat Riverdale [over the holidays].”

The Governors dropped 100 points on Powell in a win earlier this season.