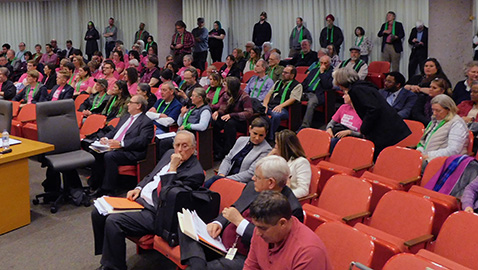 New City Councilman Tommy Smith said “Here” for the first time Tuesday as he took his seat to represent District 1 on the Knoxville City Council. Smith was chosen by the council recently to replace Stephanie Welch who resigned to take a position with Mayor Indya Kincannon’s administration.

Welch was present for the meeting as chief of economic and community development and deputy to the mayor. Both Smith and Welch took an active part in the matters before the council Tuesday.

Smith moved right into the fray during his first council meeting when an issue came up within his own district.

When Jennifer Arthur’s appeal of a Board of Zoning Appeals decision came up Smith said the 931 Langford Avenue property has “years of history” and needs more community input before being considered. Councilwoman Gwen McKenzie moved to postpone a decision for two weeks. Smith requested that both sides speak prior to postponing the consideration.

The developer is seeking a variance on the setback requirements. The proposed development,  South Haven, is only a block from the south waterfront and Suttree Landing Park and would have 230 multi-family units, 10 buildings, and block the view of the river for home owners behind the development.

Sean Chalmers, director of development for the Dominion Group, told the council the meetings were held with the Old Sevier Neighborhood and the curve of Waterfront Drive plays into the design of the facility. He said the developer wants to give the community more green space and noted that the variances were approved by the Board of Zoning Appeals.

He did say that objections include the increased traffic and the height of the buildings.

Attorney Wayne Kline represented Arthur and the Old Sevier Neighborhood and told the council the opponents have a petition against the granting of the variances signed by more than 600 people. He said that Dominion Group has shown no hardship and mentioned  the size of the 10 buildings and two commercial spaces.

Residents opposed to the variances appeared en masse wearing green scarves. Kline said the only hardship the developer has is the design of its complex. He said the South Waterfront (SW2) zone regulations minimize restricted views of the river.

“They can put these big box buildings up but they cannot reduce the 75% frontage,” he said, adding, “the buildings block the entire neighborhood’s view of the river.”

“As you can see this issue is important. This property is a jewel in South Knoxville,” Smith said in moving to postpone the vote for two weeks.

Before the motion passed there was some discussion of Smith opening an email package from Dominion prior to the meeting, with Councilwoman Lauren Rider saying council members should not have. Smith said he had talked about the property with members of the Old Sevier Neighborhood and Dominion prior to taking his seat on council.

The move to postpone passed without opposition.

Opponents of the South Waterfront were not the only ones to show up in colors to support their issue. People supporting Planned Parenthood, several dozen of them, filled part of the audience.

The issue was the expansion of Planned Parenthood’s headquarters at 710 Cherry Street at the corner of Washington Avenue.  The project, which will double the size of the building, was opposed by the Tennessee Right To Life Education Fund which objected to variances approved by the Board of Zoning Appeals.

Attorney John King said that doubling the size of the building was not a hardship and that the structure, operated by Planned Parenthood for many years, was originally approved as a medical clinic and violates the zoning there. Increase in traffic there was mentioned as well as entrances and exits off Cherry or Washington Avenue.

Resident Lynn Wyatt said a petition in support of the project was signed by several people who don’t live in the neighborhood and added there are some nearby homeowners who do object to the project.

Attorney Mark Jendrek spoke for Planned Parenthood and said the idea is to keep people from driving onto Cherry Street. He mentioned the 30 years of the organization in Knoxville and said the expansion project will cost between $1.5 and 2 million.

One citizen who spoke in support of the project said the Right to Life group was simply “throwing up a road block” to the facility.

Councilwoman McKenzie asked for an opinion from the city and Peter Ahrens, director of plans and review, said the project meets all the variances.

“They actually met all the requirements and there appears to be a hardship,” McKenzie said.

The appeal was denied by the council.