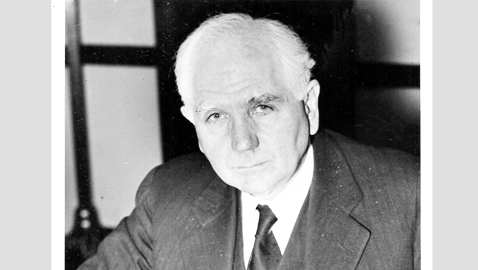 When the Tennessee General Assembly reduced the number of Tennessee’s congressional seats from ten to nine, Congressman J. Ridley Mitchell had been displaced.  Mitchell’s home county of Cumberland had been placed in the heavily Republican Second District, which was represented by GOP Congressman J. Will Taylor.  “Hillbilly Bill” Taylor was considered unbeatable by Democrats and moving Ridley Mitchell’s home county into a Republican district was believed by many to have ended the freshman congressman’s career just as it got started.  Ridley Mitchell had only taken his seat in the House of Representatives days before the state legislature passed a redistricting bill.  Much of Mitchell’s district had been dismembered and some of it had been put into the district represented by veteran Congressman Ewin L. Davis.  Undaunted, Ridley Mitchell announced he was moving from his home in Crossville to Cookeville, Tennessee.  Mitchell opened a law office in Cookeville’s Herald Building and immediately began running for Congress.  It was an audacious move for a freshman congressman to challenge a long-time representative.  Ewin L. Davis had rarely faced a serious challenger since first winning his seat in Congress in 1918.  Davis was a respected and useful congressman, while Ridley Mitchell was seen as more of an opportunist, if not a demagogue.

Mitchell had a knack for winning favorable publicity and sponsored a flurry of bills designed less to pass than to win him favor with his constituents.  The bald and portly congressman was an excellent speaker and acknowledged as a master of handshaking and backslapping, while Ewin L. Davis was far more reserved.  Congressman Davis won publicity of his own, especially in his capacity as chairman of the House Merchant and Marine Committee, which also oddly had jurisdiction over the medium of radio.  Every member of Tennessee’s Congressional delegation was strongly supporting a new veterans’ hospital for Middle Tennessee, but it had been Congressman Ridley Mitchell and Senator Cordell Hull who had actually sponsored the bill.  When the Congressional delegation descended upon the Veterans’ Bureau along with Sergeant Alvin York, Ewin L. Davis had made a strong legal brief for the need for a new hospital.  Ridley Mitchell made a strongly emotional appeal carefully constructed to appeal to the widest number of voters in his own district.  The personal style of the two congressmen could easily be summarized in their approach to the Veterans’ Bureau; Davis, a former judge, was legalistic and reserved in his own presentation.  Ridley Mitchell, also a former judge, was colorful and a shrewd politician.  Mitchell understood precisely how to appeal to people’s emotions.  One apt description of Ridley Mitchell’s ability as a politician came from his successor in Congress, Albert Gore, Sr.; the elder Gore recalled “there was a saying in the old Fourth District that he was the only Congressman who could promise every constituent a new post office and then make him happy not to get it.”

Ewin L. Davis proved to be able to do those kinds of little favors required of congressmen to earn the gratitude of the people they represent.  Davis procured four machine guns for an American Legion post in Gainesboro, Tennessee from the War Department.  Two of the machine guns were placed on opposite corners of the courthouse “where they are attracting the attention of all passers.”  Davis had to dig into his own pocket to pay to transport the guns to Gainesboro.  Davis was given the advantage inside the new Fourth Congressional District, although Mitchell was considered “a dogged opponent.”  Ridley Mitchell was moving throughout the district heralding his recently introduced bill to divert $50 million from the Reconstruction Finance Corporation for loans for farmers at 3% interest.  At the same time, Ewin L. Davis was pushing through a bill against “the illegal and indefensible immunity from prosecution sought to be given to the radio monopoly by the malodorous Harry Daugherty (President Warren G. Harding’s notorious Attorney General)…”  Davis was seeking to correct a provision of the law enacted by a Republican Congress, which he believed protected a monopoly enjoyed by owners of radio stations.  Davis referred to the “radio trusts” which he believed had “grown more powerful, more effective, more oppressive and more arrogant” over the years.

Ewin L. Davis had already indicated he would seek reelection to Congress, but made his official announcement on May 13, 1932.  Davis issued a lengthy and staid statement to the Tennessee press asking voters to carefully consider his “record of achievement” during his time in Congress.  Davis said he would “stand squarely upon my record, and invite the closest scrutiny of my service to the district…”  Congressman Davis said he had been “consistently a loyal friend of the farmers” as well as those “men who served our country in time of national emergency” and the general “masses of the people.”  Raising a populist theme, Davis reminded voters inside the Fourth District that he had “aggressively fought” those “predatory interests” who sought “to exploit the government and oppress the people.”  Davis tried hard to contrast himself with Ridley Mitchell, pointing out after almost fourteen years in Congress, he had only been absent from his office for two weeks due to a death in his family.  Davis was alluding to the fact Ridley Mitchell left Washington to campaign frequently in Tennessee.  Days later, Democrats in Shelbyville, Tennessee gathered together and passed a resolution supporting Ewin L. Davis’ reelection to Congress.

Congressman Ewin L. Davis quickly found himself under increasing pressure from veterans to support the Patman “bonus bill”, legislation that would require payment of a congressionally approved bonus to those men who had served in World War I.  With the country in the midst of the Great Depression veterans were clamoring for immediate payment of the bonus, which amounted to roughly $1,000 per veteran.  Congressman Edward Eslick of Tennessee signed the petition to bring the matter to a vote while four colleagues from Tennessee had failed to sign it; Congressmen E. H. Crump, Republican O. B. Lovette, Joseph W. Byrns of Nashville, and Ewin L. Davis were the holdouts.  Just days after E. E. Eslick signed the petition, Ewin L. Davis was feeling the heat and added his own name to the petition.  Eslick made an impassioned plea on behalf of the veterans’ bonus bill and died of a heart attack while making his speech on the floor of the House.

Congressman Davis was back home in Tennessee in July with the Democratic primary just weeks away.  Davis participated in a special program in Murfreesboro, which he helped to arrange.  Davis moved on to Putnam County, the new home of his opponent Ridley Mitchell, where he spoke to a gathering of some 200 persons at the courthouse in Cookeville.  Davis tore into promises made by Mitchell and promised to vote against any new taxes “unless they were necessary to meet the actual expenses of government operation.”  Ridley Mitchell followed Davis into Murfreesboro and denounced the congressman for having opposed payment of the bonus bill in 1924.  Potentially more effective, Congressman Mitchell produced records from the Clerk of the House showing three of Ewin L. Davis’s daughters had been on his congressional payroll for nine years.  Mitchell pointed out the Davis daughters were attending college at the time in “exclusive schools in Washington and Virginia” while on their father’s payroll.

Ewin L. Davis spoke in Shelbyville, Tennessee and attempted to refute the charges leveled against him by Ridley Mitchell.  Speaking before a crowd of 2,000 people, Davis defended his record and showed irritation with Mitchell, saying he was surprised “any citizen could listen to such charges or could support such a man.”

Ridley Mitchell continued to campaign, all the while making numerous promises.  Congressman Mitchell said he believed congressional salaries should be reduced from 9,000 per year to $5,000 per annum.  Mitchell roared that every “useless” federal board and commission should be abolished, although he did not specify which agency he considered to be useless.  Mitchell attacked “the extravagant cost of government in all branches.”

Clearly on the defensive, Ewin L. Davis trailed Ridley Mitchell into Gainesboro, Granville and North Springs where he again tried hard to counter Mitchell’s attacks.  The congressional race in the Fourth District narrowed when former state senator James P. Owen announced he was withdrawing from the campaign a day before the primary election.  Owen complained it was “very difficult to wage a fight for a seat in Congress” in a district that was geographically quite large, especially when the other candidates were members of Congress “and are permitted to carryon on their campaigns at the expense of the taxpayers.”  Owen grumbled, “In traveling over the district, I find that they are sending out untold thousands of campaign speeches and other election literature from Washington at government expense.  By these unfair privileges, members of Congress can keep themselves constantly before the public without cost to themselves, while the same amount of publicity would cost candidates who are not members of Congress thousands of dollars.”  Owen said the practice of using a congressman’s franking privilege during campaigns would be “a fertile field for the taxpayers’ association to get in some good work.”  While thanking his friends for their support, J. P. Owen declared “if not providentially hindered I will be in the fight two years from now.”

Both Ewing L. Davis and Ridley Mitchell largely ignored Smith and he proved to be no factor in the primary campaign.  Congressman Mitchell closed his campaign in Smith County, speaking in the courtroom of the Smith County Courthouse.  After giving an hour and a half long speech, Ridley Mitchell “shook hands with hundreds of the men and women” who had come to hear him speak.  The Tennessean reporter covering the campaign said Mitchell had “received an enthusiastic ovation” from his audience.  The day before Ridley Mitchell had campaigned in Lebanon, Tennessee where his hour and a half speech was not long enough to suit his listeners.  Evidently the crowd was so insistent, he spoke for an additional thirty minutes.  As voters headed to the polls, Ridley Mitchell swept through Celina, Byrdstown and Willow Grove, Tennessee.

Ridley Mitchell’s insistence upon personal contact and relentless campaigning had paid off.  Mitchell’s victory ended Ewin L. Davis’ congressional career.  Turnout was fueled by an especially bitter race for the gubernatorial nomination between Hill McAlister and Lewis Pope.  With 354 precincts out of 377 reporting, Ridley Mitchell led by 1,432 votes.  Mitchell’s campaign managers proved to be overly optimistic in their projections of the congressman carrying fourteen of the seventeen counties comprising the Fourth Congressional district.  Ridley Mitchell carried six counties, while Ewin L. Davis carried eleven.  Yet Mitchell’s majorities in the counties he had represented in Congress were massive.  Congressman Mitchell won Pickett County with 775 votes to only 30 for Davis.  Mitchell won Putnam County (Cookeville) with 2,936 votes to a paltry 507 for Ewin L. Davis.  Ridley Mitchell’s hard campaigning had reduced Ewin L. Davis’ margins in those counties he had represented in Congress for fourteen years.  By the time all precincts had reported, Ridley Mitchell had beaten Ewing L. Davis by 902 votes out of  39,170 ballots cast.  James P. Owen, who had withdraw shortly before the primary, received only 340 votes district-wide.  Mitchell had won with just barely over 50% of the vote with Ewin L. Davis winning slightly more than 48% of the ballots.

The show horse had beaten the workhorse.