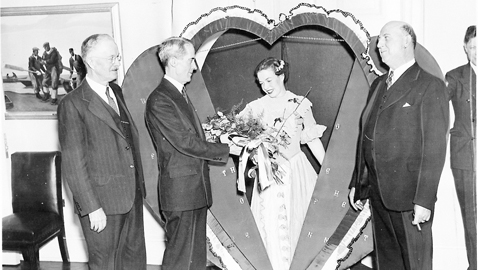 By Ray Hill
Tennessee Congressman Ewin L. Davis, a veteran of fourteen years, had lost his seat to freshman legislator J. Ridley Mitchell in the 1932 Democratic primary.  Mitchell’s district had been dismembered by the Tennessee General Assembly causing Mitchell to move from Crossville to Cookeville.  Mitchell, remaining the underdog for most of the campaign, managed to squeeze out a narrow victory to upset Ewin L. Davis.  The contrast between the two men was quite noticeable.  Ewin L. Davis was slight, possessed of a head of white hair and stately.  Ridley Mitchell was bald, tall and  somewhat portly.  Mitchell’s affinity for being genial was well known and he had once complained he wished he had four hands with which to shake the hands and slap the backs of his constituents.  Perhaps the decisive issue in the campaign had been Mitchell’s lambasting of Davis for having carried his three daughters on his Congressional payroll while they were in college.  Many Tennesseans resented the fact, especially with the country in the grip of the Great Depression and jobs scarce.

Ridley Mitchell’s upset of Ewin L. Davis brought him newfound respect.  Hailed as a “worthy successor to” Cordell Hull and former governor Benton McMillin, both of whom had represented Tennessee’s Fourth Congressional district, Mitchell’s victory was considered by the Nashville Tennessean as “the greatest political campaign ever waged for a congressional seat in the state’s history.”  The Tennessean reported Ewin L. Davis had been “groomed by the McConnico machine in Nashville for governor two years hence” and had enjoyed significant financial support from the American National Bank “throughout the district.”  The Tennessean believed Mitchell was such an underdog in the congressional campaign that he had won in spite of being challenged by “the greatest odds faced by any congressman in a quarter of a century.”

The Tennessean thought Ridley Mitchell’s victory was all the more important as the congressman had “no district or county headquarters, no district or county managers, and no district or county organization.”  Perhaps even more astonishing was the fact, at least according to the Tennessean,  Mitchell “sent out no letters soliciting votes” in his bid for Congress.  The Tennessean marveled Ridley Mitchell “did no newspaper advertising, except in making his formal announcement” for Congress.  Despite the Tennessean’s claim, a third entrant in the Fourth Congressional district race for Congress, former state senator James P. Owen, had withdrawn shortly before the primary election, complaining bitterly that it was difficult to mount a campaign against two incumbent congressmen who flooded the district with campaign literature and tens of thousands of letters.

Certainly Ridley Mitchell thoroughly savored his victory and the Tennessean reported the congressman had been greeted by “the greatest political demonstration ever staged in the Fourth” when he returned to Cookeville on the Friday following the election.  The Tennessean concluded Ridley Mitchell had not only succeeded in defeating Ewin L. Davis, but his victory was “certain to entrench him in the Fourth District seat for years to come.”

Although Ewin L. Davis first refused to concede the election, it was soon readily apparent he had lost the Democratic nomination narrowly.  Judge Davis gamely campaigned for the Democratic ticket in the general election.  As his time in Congress grew shorter, Ewin L. Davis was back home in Tullahoma and made a brief speech on Armistice Day at the site of the American flag in Davidson Park.  Davis’ term in the House of Representatives would not expire until March 3, 1933 and the congressman worried about his wife, who underwent a serious operation on her eyes.  A “lame duck” congressman, Ewin L. Davis, like virtually every other Democrat in the United States, had been delighted by the election of Franklin D. Roosevelt as president.  Davis was fortunate enough to be better connected than most of his peers who had lost elections in 1932.  Davis’ brother Paul was the chairman of the American National Bank chain in Tennessee and another brother Norman, was a respected diplomat in the Hoover administration despite being a Democrat.  Like his brother Paul, Norman Davis had been a highly successful businessman before becoming a diplomat.  From his financial dealings in Cuba just after the turn of the century, Norman Davis had made millions of dollars.  Norman Davis’ financial expertise was such that he had been appointed a special advisor to the Secretary of the Treasury for foreign loans during World War I.

Norman Davis would be welcomed into FDR’s own administration with open arms.  Before Roosevelt took the oath of office, speculation ran rampant as to which Tennessee Democrat would receive what federal post.  Some speculated Ewin L. Davis was in line to join his brother Norman in the diplomatic corps.  President Roosevelt had something else in mind for the former congressman.

Congressman J. Ridley Mitchell had no concerns about finding another job and the show horse legislator made a speech on the floor of the House promoting his bill to cut the salaries of congressmen almost in half.  Mitchell did make a point that was compelling and difficult to evade when he noted virtually every other federal employee in the country had seen his or her salary go down as a result of the drive for greater economy in government.  The Nashville Tennessean published an editorial lauding Ridley Mitchell, claiming the congressman had “attained a prominence which few members of the lower house” managed to achieve after decades of congressional service.  The Tennessean thought Congressman Mitchell deserved his new prominence because of “the untiring fight he is making for economy in government.”  The Tennessean praised Ridley Mitchell’s fight against congressional nepotism and the Fourth district congressman’s drive to cut congressional salaries by 50%.  The Tennessean concluded, “We need more men in Washington of the Mitchell type who are willing to put the needs and desires of the people above their own petty ambitions and wishes.”

As FDR struggled with the Depression, Congress did cut it’s salary to $8,500, a measure opposed by several Tennessee congressmen.  Representatives Gordon Browning, Jere Cooper, Carroll Reece, J. Will Taylor and Clarence W. Turner all voted against the bill, as did Congressman J. Ridley Mitchell.  The Tennesseans said they opposed the “economy” bill, which was strongly pushed by the Roosevelt administration, on the grounds it adversely affected veterans.  Congressmen Joseph W. Byrns, E. H. Crump, and Sam D. McReynolds voted for the administration bill.  Although Mitchell said he was concerned about how FDR’s economy bill might affect veterans negatively, some ex-servicemen quickly reprimanded the congressman inside his own district.  The American Legionnaires sponsored a petition signed by 150 residents of Murfreesboro, Tennessee demanding Mitchell back the President.  “Believing in the leadership of our President and realizing this is no time to play politics, we honestly request you to support the policies of the President, thereby representing the sentiment of your people,” the petition read.  Nor did Ridley Mitchell back the President when FDR wanted Congress to repeal prohibition.  Mitchell was the only Middle Tennessee congressman who voted against repeal.  Mitchell’s victory over Ewin L. Davis was still fresh enough in the minds of many to  cause the Tennessee General Assembly to rethink its original decision to move his home county of Cumberland back into the Fourth Congressional district.  It was a clear indication that many legislators recognized Ridley Mitchell’s personal popularity and growing political potency.

Congressman Ridley Mitchell jumped to his feet on the floor of the House of Representatives to praise the bill creating the Tennessee Valley Authority.  “This is a great day for the South, a great day for Tennessee,” Mitchell cried, “and for the people of my Congressional district.”

“We are about to get action,” Mitchell said.  “No longer can the power trust, or the fertilizer trust delay it.  It is the expressed will of the people of America, their mandate at the polls.”

Yet, like most politicians, J. Ridley Mitchell did not remain universally popular inside his Congressional district.  By the spring of 1933, John J. Jewell, an ambitious state senator, was rumbling he was eager to run against Congressman Mitchell in 1934.  Jewell would not find Ridley Mitchell lazing about as the congressman never missed an opportunity to ingratiate himself with the people of his district.  When a tornado swept through towns in the Fourth District, Congressman Mitchell was importuning the American Red Cross for help.  Mitchell announced he had received assurance help would be forthcoming as quickly as possible.  Nor had Ridley Mitchell forgotten the Legionnaires in his district.  Congressman Mitchell accepted the opportunity to be the keynote speaker at a special ceremony at Arlington Cemetery to honor the country’s fallen soldiers, an event sponsored by the American Legion.  Ridley Mitchell, an effective orator, delivered an appropriately rolling address lauding America’s fallen soldiers from the Revolutionary War to the First World War.  Mitchell expertly wrung tears from many members of his audience and made certain his speech was well covered in Tennessee.

Another Mitchell speech, a spontaneous oration, caused an “uproar” in the House of Representatives.  The subject was wholly parochial in nature and of little interest to anyone outside of Middle Tennessee.  The bill being considered by the House was the simple matter of transferring Bedford County to the jurisdiction of the federal court in Winchester, Tennessee, which was then attached to the federal court in Nashville.  Mitchell began his speech with a paean to his own Congressional district, as well as “a recital of the great men that district and the state of Tennessee has contributed” to high office.  Representative John Cochran of Missouri interrupted Mitchell to mildly wonder “whether Bedford County was one of the counties where” Ridley Mitchell had “declared the farmers were getting only 5 cents a dozen for eggs.”  Mitchell had apparently made the claim in an earlier speech to a House committee the year before.  Congressman Mitchell replied that it was, causing Cochran to snap he did not believe the farmers of Bedford County should have to travel some 60 miles to go to a court.

Ridley Mitchell proved to be more than a match for the caustic gentleman from Missouri.