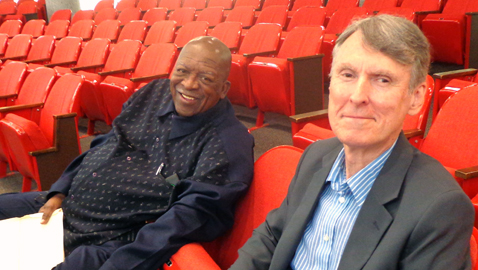 Two distinguished Knoxville businessman may be honored soon with the renaming of two streets. One of the men is a living legend in the African American community and the other was a well-respected merchant and leader of the Pond Gap neighborhood.

Both street name changes were suggested by two current community leaders earlier this month at the meeting of the city’s Public Property Naming committee.

“Beal Bourne Street” was approved by City Council last week to replace Milligan Street between E. Magnolia Avenue and Martin Luther King, Jr., on a suggestion by Rev. Harold Middlebrook. The retired minister said that the idea of the street name started several years ago but faded. He said the idea of renaming the street might surprise Bourne, who owns Jarnigan and Son Mortuary, and said that Bourne and his staff have served poor people in the area for “almost free” when needed.

Rev. Middlebrook said that Bourne has been active in the community and explained that no address changes would be necessary because there are no homes or businesses along that part of the street.

“Charles Newman Drive” may replace Riley Drive between Renford Road and Hollywood Road in a proposal presented by a descendant of Newman, David Williams. The president of the Pond Gap Neighborhood Association told the committee that the short street would cause no mail changes and that his great grandfather, Newman, operated grocery stores on 5th Avenue and on Locust Street and carried many customers on credit during the Great Depression.

The “Riley Drive” name, Williams explained, came with the development of the Hollywood Subdivision as many streets were named for television shows and said that “The Life of Riley” show was chosen but has little connection with the history of Pond Gap.

Councilman Marshall Stair, who chairs the committee, asked Williams about initial opposition to the name change by a business on the street and the applicant replied that no one on the street uses it as a mailing address. He said the short street is “Not much more than an alley.”

Both suggested street name changes passed the committee unanimously.  The “Beal Bourne” street name was passed in Tuesday’s Council meeting and the “Newman Drive” change will be heard at the next regular meeting.

The Property Naming Committee meets only when applications are received to change a name of a public place. There are two types of street names: the traditional change from one name to another and Honorary Street Names. The honorary naming does not change the title of a street but receives a different color sign mounted directly below the official street name. Honorary names are also considered for public properties such as buildings, parks or recreation facilities.

The committee is made up of people named by council members from all the city districts, the mayor and vice-mayor, the city law director and the engineering department. Applications are submitted along with a $ 252 request fee to the City Recorder’s Office.