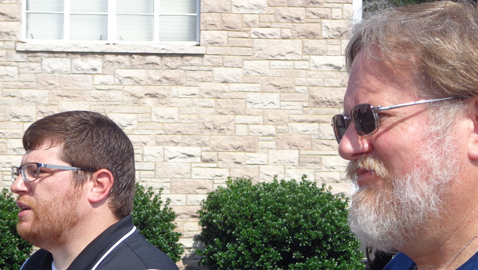 The efforts of two teachers and their students led to recognizing a Knoxville hero recently with the dedication of the Mary Francis (Frankie) Housley Bridge just below Gresham Middle School in Fountain City. The Holbrook Drive bridge was named in honor of the Central High School graduate who became an airline stewardess and saved 10 passengers after her airplane skidded off a runway in Philadelphia and caught fire.

The heroine is buried in the Lynnhurst Cemetery in Fountain City and, for many years, her story was all but forgotten until the two teachers, years apart, brought public attention to her act of bravery and sacrifice.

Central High School teacher Chris Hammond, an avid local historian who has been involved in other local history projects, sought the renaming of the bridge and organized the research and recognition.

Hammond had discovered Housley’s story by chance from an article in the Heritage Room of the high school.

“I wanted to find out more about this woman,” he said. He added that he has a comic book featuring national heroes that featured Frankie Housley’s story on the cover and an article entitled “Supreme Sacrifice.”

Years before, Gordon Sisk III, then a history teacher at Central High School, discovered the story of Frankie Housley and got his students involved in researching the history of the former Central student.

“I saw the picture in the library, or drawing, and found an article from Reader’s Digest and thought, ’This is unbelievable.’  So I ran off copies and my students read the article and we started talking about things we could do,” Sisk told The Focus.

“We did some research and tried finding some of the survivors. We found a phone number and called one of them and the class had a conversation with them,” he said.

“I’ve done nothing compared to this gentleman,” Sisk said referring to Hammond, adding, “He’s on a mission and he’s working on maybe getting the statue made.”

Hammond hopes to have Frankie Housley inducted to the Tennessee Aviation Hall of Fame. He’s also hoping to have a statue placed at Fountain City Park of the hero.

“It will take a lot of fundraising but there are so many CHS graduates who could contribute,” Hammond said.

When the bridge was officially dedicated recently, John Housley III came to the ceremony from his home in Florida and accepted the proclamation from Mayor Madeline Rogero delivered by Councilman Nick Della Volpe. Housley, a nephew of Ms. Housley, said his family had always thought highly of “Frankie” and collected news articles and other items about the heroine.