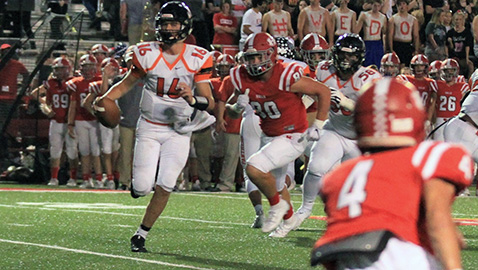 Powell High’s football team proved that Friday night, turning in an impressive performance in a 49-0 win over rival Halls in the Battle of Emory Road.

An estimated crowd of over 7,000 turned out at Halls’ Dinzel “Dink” Adams Field to watch the two unbeaten teams square off. It was close for just a little over a quarter.

“We have an unbelievable group of kids,” said Matt Lowe, in his second year back at Powell. “Not only is there some real skill and talent on this group, they love playing football together. And they are so unselfish so much of the time.

“A lot of that carried over to this past off-season and what they went through last year (having to forfeit six wins which cost them a playoff berth). They just want to win and win together and right now they are doing a pretty good job of it.”

Senior quarterback Walker Trusley had to be the Player of the Game. He completed 24 of 29 passes for 373 yards and five touchdowns.

His first one capped the Panthers’ opening possession – a 70-yard, 10-play march with Trusley completing passes in the flats on both side of the field before hitting sophomore Jayden Collins with a 12-yard scoring toss less than two minutes into the game.

On the play, Trusley faked a run, drawing the defense in, then tossed the pass over the Red Devil defenders to his wide-open receiver. Kicker Cole Judy added his first of seven PATs.

Freshman Adarius Redmond was Powell’s leading receiver with four catches for 117 yards and two touchdowns, including a 79-yarder that sparked a 21-point second quarter. He caught the pass in the flat, broke a tackle and raced for paydirt.

Redmond’s other score came on a 1-yard slant pass that gave Powell a 35-0 cushion and set off the TSSAA mercy rule running clock with 8:10 showing in the third quarter.

Powell’s third touchdown came on Jordan Brown’s 67-yard run midway into the second quarter. He got a great block downfield on the play from 270-pound senior lineman Michael Treadwell.

Two freshmen produced the Panthers’ final touchdown as Jordyn Potts threw a 14-yard pass to Gianni Magdos with 6:38 left in the game. Magdos’ interception return to the 14 set up his first high school TD.

The Powell defense shined, too. The closest Halls got to scoring was a 37-yard field goal attempt by Jake Marcantel that sailed wide right early in the second quarter.

“You can’t ask for anymore than a zero,” said Lowe, complimenting his defense.

Halls Coach Scott Cummings was disappointed with his team’s play.

“The bottom line is Powell is a dang good football team,” he said. “They’ve accumulated a whole lot of talent in a short period of time. But at the same time, our deficiencies that we’ve been able to get by with and still win manifested themselves tonight because we did face a good talented team.

“We’ve got to be able to cover people, tackle people and block people. It’s all fundamentals and we are not very good at fundamental football. That’s the bottom line. And we have got to get better.”

Central, the defending Class 5A state champion, will make the short trip over Black Oak Ridge next week to play Halls.

“We’ve got to get it turned around in a hurry,” said Cummings.

Powell will travel to Campbell County, seeking its fourth straight Region 3-5A win.