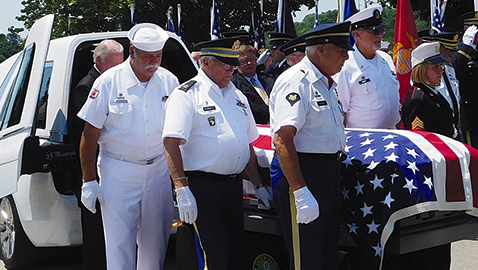 A Vietnam War veteran with no known family or relatives was buried last week. The 20-year resident of Newport would have been pleased to find that he had a family among fellow veterans as more than 100 people turned out for his service.

Among the crowd were members of all five military branches, their spouses and other well-wishers. The burial of a veteran with no one to claim him could have been a very small service but other veterans were not going to let that happen.

The 2 p.m. ceremonies began with a motorcycle escort and the honor guard taking the casket from the Berry Funeral Home hearse. The chapel at the East Tennessee Veterans Cemetery on Governor John Sevier Highway was packed and dozens of people stood at attention outside during the ceremony, hearing it on loud speakers. While initially the funeral was announced for 1 p.m. that Monday it actually didn’t happen until 2 .m. and, despite the hot weather, people stayed around for the honors.

Specialist 5th Thomas Robert Saulsbury was a New York state native who lived for the past 20 years in Newport. His friend and next-door neighbor Michael Powell promised Saulsbury that he would be buried with military honors and afterwards was presented the American Flag that draped the coffin.

Rev. Doctor Pat Pollis, chaplain of the Captain Bill Robinson Chapter 1078, Vietnam Veterans of America, spoke to honor the deceased. A Vietnam veteran himself, Pollis described Saulsbury’s service to our nation and the medals the soldier received during active duty. Saulsbury was honorably discharged in 1972.

“Then, why are we here?” Pollis asked and paused.

“And what is it that we do know?” he wondered.

“We know that he is a veteran and served his county honorably. He wasn’t a nobody he was a somebody. Somebody who put on the uniform of this great United States of America. A somebody who traded his home for the jungles of Vietnam to fight for people he didn’t even know,” Pollis continued.

“So that one day they might have the freedom that he had as an American,” he said.

“We don’t know where he went or what he did after the military or what brought him to Tennessee, but whatever it was it caused him to stay,” Pollis said.

“I say to you today he has a family and we are here. I struggle with the word ’unclaimed‘ but as long as there are two of us standing we will never be unclaimed. Our vow is to never leave anyone behind,” he continued.

“The fact that we are here today in great numbers says so much about who we are, about the state of Tennessee, and about what we understand about what it means to be a veteran. Thomas Robert Saulsbury is claimed, is known for he is one of us,” the chaplain concluded.

The flag was removed from the coffin, folded properly and presented to Saulsbury’s friend Michael Powell. Outside a 21-gun salute was performed, followed by the playing of “Taps.” The honor guard, made up of members of the five military services, moved the coffin to the hearse for transport to the gravesite.

Berry Funeral Home, a sponsor of the Dignity Memorial Homeless Veterans Burial Program, and the East Tennessee Veterans Cemetery hosted the ceremonies. Prior to ceremonies dozens of citizens lined the road with American flags for the motorcycle escort and the hearse to pass through.

Several current and past city and county officials were on hand along with active duty and veteran military men and women. The ceremony would have pleased Specialist Saulsbury.