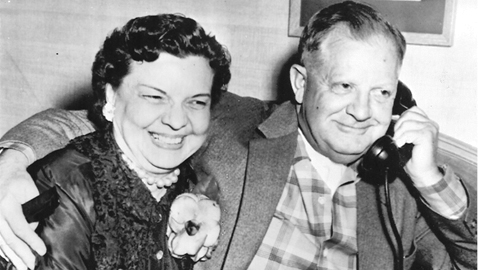 “Someday Louisiana is going to get good government.  And they ain’t gonna like it.” – Earl K. Long

Huey Long has gone down in American political lore for a host of reasons. Huey Long is still well remembered today and he founded a political dynasty that lasted for more than half a century. Huey, his widow Rose, and son Russell, all served in the United States Senate. Earl Long, Huey’s younger brother, was three times governor of Louisiana, and a battalion of Longs populated the halls of Congress at various times.

Earl K. Long is not as well remembered as his older sibling, and if he is remembered today, it is usually for his romping with stripper Blaze Starr. The movie with Paul Newman did little to enhance “Uncle Earl’s” reputation and diminished a surprising record of achievement. While not as mesmerizing a speaker as Huey, Earl Long was masterful in his use of ridicule and was a highly entertaining stump speaker in his own right. Huey Long was perfectly capable of using good manners when he wished to, but Uncle Earl was more earthy, crude, and homespun. For all his rhetoric, Huey Long saw himself as a spokesman for the common man, but he never believed himself to be one. Huey reputedly owned more than a hundred tailored suits, yet Earl Long always looked as if he had slept in his clothes for days.

For those who thought Huey Long unpredictable, Earl K. Long was downright frightening. Uncle Earl used every means at his disposal during a campaign and wasn’t afraid of a physical scrap. When Earl got into a fight with an opponent in the halls of the Louisiana State Captiol and Huey was told of the fracas, he asked eagerly, “I bet Earl bit him, didn’t he? Earl always bites.”

As indeed he had.

Louisiana has produced some remarkable political characters, but none more so than Earl K. Long.

Earl sulked in the shadow of his more famous brother, especially when Huey was at the peak of his power. Earl craved political office himself, but Huey didn’t much like the idea of another Long sharing the stage with him. Huey’s departure from this earth gave Earl the opportunity to blossom and come into his own.

Earl Long was slated to run for lieutenant governor in 1935 on the Long ticket with Richard Leche, who was the candidate for governor. The Leche – Long ticket won the election and Uncle Earl became governor when Leche resigned amidst charges of corruption. Earl sought to be elected governor in 1940, but lost to Sam Houston Jones, who ran as the anti-Long candidate. Jones promised to restore honest government to Louisiana, which probably few truly believed, but enough voters hoped for the best and Earl Long lost his first campaign for governor. It was an especially bitter loss for Governor Long, as he had led in the first primary and lost a close race in the run-off election.

Nobody believed Earl Long was done with politics and he was a candidate for lieutenant governor again in 1944 on a ticket with Congressman Lewis Morgan. Once again Uncle Earl led in the first primary, only to lose the run-off election. Earl had been somewhat wary of running for governor again as singing cowboy (and the author of the song “You Are My Sunshine”) Jimmie Davis was making a strong bid for the office.

The persistent Earl Long decided to run for governor in 1948 when Jimmie Davis could not succeed himself. Facing former governor Sam Houston Jones, Judge Robert Kennon and Congressman James Morrison in the Democratic primary, Earl faced his old foe Sam Jones in the run-off election.

The election results in the first primary astonished and appalled more than a few people. Earl Long had won over 41% of the vote with Sam Houston Jones finishing with about 23%.

Once again, Jones was the good government candidate, a conservative, and business oriented. Uncle Earl ran on a platform promising old age pensions, higher salaries for teachers, the end of civil service in Louisiana, as well as doubling the amount the state spent on school lunches for children, hospitals that extended charity, and even the state asylums. Long’s campaign was not hurting for money, as other political figures helped to raise money, and money from oil and gas producers flowed into his coffers. Reputedly, Uncle Earl also got significant contributions from organized crime. It was a mighty sweet victory for Uncle Earl as he beat Jones easily.

Uncle Earl had once said, “I can make them voting machines sing ‘Home Sweet Home’” and indeed he had.

One Tennessee newspaper groused that Uncle Earl had promised everybody everything, save for the moon.

That same year saw a revival of the Long machine. Twenty-nine year old Russell Long, Huey’s son and Earl’s nephew, became a candidate in a special election for the United States Senate to fill the vacancy caused by the death of Senator John H. Overton. Judge Robert Kennon, who had run third in the recent gubernatorial election, proved to be a very strong candidate for the Senate. Ultimately, Russell Long won by 10,475. The next day Russell Long turned thirty and would remain in the U. S. Senate until 1987.

Uncle Earl summarized one of his strengths, saying, “The kind of thing I’m good at is knowing every politician in the state and remembering where he itches. And I know where to scratch him.”

Uncle Earl was restricted by Louisiana’s ban on governors being able to run for a second consecutive term and watched unhappily as Judge Robert Kennon finally won statewide office to succeed him.

The former governor merely bided his time to return to office in 1956. Earl Long faced a rather weak lot of candidates, the strongest being New Orleans Mayor deLesseps (Uncle Earl invariably pronounced his name as “Dellasoups”) Morrison. Long won the first primary, which rarely occurred in Louisiana gubernatorial elections.

“Huey never done that, did he?” Uncle Earl crowed.

Earl Long’s second term was to be tumultuous and puzzling. Governor Long quietly induced the legislature to equalize pay amongst white and black teachers. Long eventually feuded with the legislature over attempts to restrict voting by African-American citizens. Long came out for black folks being given the right to vote unhampered in Louisiana.

Uncle Earl toyed with the idea of resigning a few months before the expiration of his term, thinking he could skirt Louisiana’s prohibition on governors succeeding themselves in office. Instead, Long ran for lieutenant governor and once again, he lost.

It was during Earl Long’s second administration that he attracted unceasing publicity, yet much of it covered his behavior, which was increasingly bizarre. Long’s marriage to his wife, Blanche, was falling apart. Recognized as a shrewd woman, with a fine sense of what constituted good politics, and a gracious manner, “Miz Blanche” would eventually become a respected political figure in her own right and would live to the ripe old age of ninety-three.

Earl’s marriage had long since ceased to be a source of pleasure to either partner and Miz Blanche watched with dismay as the governor threw away money by excessive betting on the horses. If that weren’t bad enough, Uncle Earl almost compulsively bought thousands of dollars of odds and ends he didn’t need, and worse still, began a public affair with stripper, Blaze Starr. Governor Long’s behavior became manic and highly erratic. Miz Blanche had been horrified when she noticed her husband was drinking champagne with his breakfast.

After a rambling and largely incoherent speech on the floor of the Louisiana House of Representatives, Miz Blanche had a drugged Uncle Earl trundled off to a waiting state plane and flown to Galveston, Texas where he was promptly admitted to a mental hospital.

The commitment had to be certified by a court and the wily Uncle Earl gathered his wits and quickly outsmarted his wife. He convinced his nephew, Senator Russell Long, and his wife that he would agree to get help, but only in Louisiana. Miz Blanche agreed and dropped her commitment suit in Texas.

Uncle Earl arrived at the mental hospital in New Orleans and walked out the next day. A determined Miz Blanche immediately affixed her signature to fresh commitment papers and Governor Long was apprehended and taken to the state asylum in Mandeville.

An exceedingly angry Governor Long demanded to be released, but the doctor in charge refused to let him loose. Long fired the state superintendent in charge of the Louisiana asylum and hired a new superintendent, who in turn, fired the doctor. Uncle Earl emerged from the asylum triumphantly and a court later confirmed even if he were crazy, he had the power and authority to fire the offending superintendent.

Governor Long roared he was “not nuts”, but went on to say if he were, he had been “nuts all my life.” There were a good many Louisianans who would have agreed.

Uncle Earl and Miz Blanche finally separated and headed for the divorce court. Their divorce was not yet final when Earl died.

Uncle Earl’s later years, for all his successes, seemed to close in around him. Beset by personal and political troubles, not the least of which was his troubled marriage to Blanche, he sought to revive his political career by running for Congress from Louisiana’s Eighth District in 1960. To get to Congress, Uncle Earl would have to beat an incumbent in the Democratic primary. Harold McSween had been elected when Earl’s brother, George Shannon Long, a dentist popularly known as “Doc”, died in 1958. It was a grueling campaign, held during the heat and humidity of a Louisiana summer. A third candidate siphoned off enough votes to cause Uncle Earl to trail Congressman McSween in the first primary. Earl campaigned even harder, making five and six speeches per day, and he won the run-off election.

By the time of the election, Earl was obviously ailing. It was especially obvious to his friends, one of whom thoughtfully put a sedative in Long’s coffee, which caused him to sleep for hours. When he awakened, Earl began fretting. Sixty-five years old and sensitive to how his illness would be perceived by voters, Earl summoned a flock of reporters to his hotel room where he announced there was nothing wrong with him save perhaps for “a touch of ptomaine”, which he attributed to a barbecue pork sandwich.

Suffering from severe chest pains, Earl K. Long was in the hospital the day he won the Democratic nomination. More than a week later, Earl Long was still in the hospital in an oxygen tent and he must have been mighty tired for when death came for him, he “rolled over and died” from a heart attack.

It was the only time Earl K. Long had rolled over without a fight in his life.